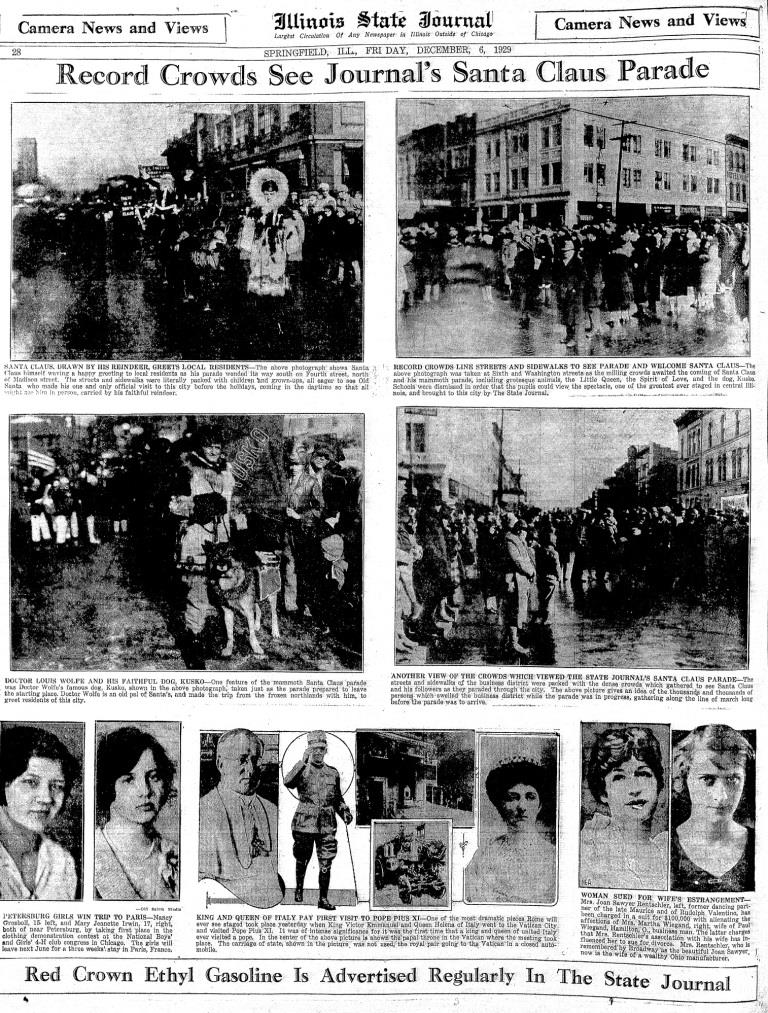 Thousands of people turned out to see Santa Claus parade through Springfield on Christmas Eve 1914, but the parade, which was part of a much larger communitywide holiday celebration, wasn’t repeated for another 15 years.

Children – “urchins,” as the Illinois State Journal repeatedly referred to them in its Christmas Day story – were the focus of the event, which was put on by an ad-hoc group of wealthy society women. The Journal rhapsodized about the Christmas spirit:

Springfield’s rich, scions of the social elite, stood shoulder to shoulder yesterday with men and women of humble walks in life; men of affairs leveled their status for the time to that of the jobless, and differentiation between wealth and poverty, so far as appearances go, was obliterated.

It was a case of “Merry Christmas to all,” and the “community” spirit prevailed; it was the city’s first municipal Christmas and not only the visitation of Santa Claus and the thrilling spectacle attending his coming, but the city-wide Christmas Eve as well, bespoke a community of feeling never before detected.

The event began with a free motion picture for several hundred children at the Vaudette theater, 223 S. Fifth St. Kids then moved on to the YMCA, where “upward of thirty society women” distributed more than 1,000 Christmas stockings.

A thousand or more children of the city enjoyed Christmas last evening simply because of the municipal idea. They were the throngs who gathered at the YMCA building at 1:30 o’clock and received from prominent women of the city their generous gifts. It was interesting and satisfying to see the urchins grin with keen delight as they passed into the building, received their stockings well filled with toys and things to eat, then passed out again and compared notes with their young neighbors….

Some were well-dressed, others were ragged. All of them were laughing gaily and straining their little necks to get the first view of the filled stockings that were to become theirs. Something over a thousand stockings were piled high in the association lobby. At the given hour they were taken down and, one by one, handed to children – children to whom the gifts meant the only semblance of a Christmas this year.

Santa had been scheduled to arrive in Springfield on the Chicago & Alton Railroad, but his train ran late that day.

“(A)ll things being possible with old Kris, the quaint man at 2:30 o’clock, the scheduled time, came riding into the city in a sleigh, drawn by four decorated steeds and attended by a detachment of heralds,” the Journal reported.

Santa went directly to the Illinois State Arsenal at Second and Monroe streets, where the children had moved to await him.

Santa, his retinue and the children, preceded by a troop of cavalry and the Illinois Watch Factory Band, then paraded east on Monroe Street and north on Sixth Street to the courthouse (now Old Capitol) square. The parade stopped at the courthouse Christmas tree, where Santa gave a brief talk.

“Then he tossed into the crowd a number of toys, which were grabbed up by fortunate urchins and tucked away beneath coats.”

That evening, Santa appeared again to help distribute food baskets to needy families. Then Santa, members of the organizing committee (almost all women) and local dignitaries (all men) had a closing dinner at the St. Nicholas Hotel.

“As darkness gathered,” the Journal story concluded, “the community tree took on its prettiest dress. Decorated and multicolored electric lights with a large start surmounting, the illuminated emblem of Christmas time brought many an expression of admiration as it stood out in beautiful relief against the courthouse.”

In a sidebar, the newspaper credited Lewis Wiggins, former owner of the Leland Hotel, with portraying Santa – although it did so coyly, to avoid giving the secret away. “Lewis Wiggins Is Seen in Important Christmas Role,” the headline read.

The idea for the celebration apparently began with Mae Bambridge, founding secretary of the Springfield YWCA. The main organizers were Katherine Sorgatz, Kate Hay Brown, Mildred Coffman and Helen Henkel. (Note: Except for Coffman, who was single, the newspaper followed custom in identifying the women by their husband’s names, two of which were misspelled; the names as given in the paper were Mrs. George Sargatz, Mrs. Stuart Brown and Mrs. Herbert Henkle).

Newspaper files give no indication that anyone ever attempted another communitywide parade until 1929, when the Journal itself put on a Christmas spectacle.

“Record crowds,” the newspaper said modestly the next day “…awaited the coming of Santa Claus and his mammoth parade, including grotesque animals, the Little Queen, the Spirit of Love, and the dog, Kusko. Schools were dismissed in order that the pupils could view the spectacle, one of the greatest ever staged in central Illinois, and brought to this city by The State Journal.”

(Kusko was a Siberian husky from Alaska, brought to Springfield by a reporter, Louis Wolfe, who had traveled extensively around Alaska via dogsled. The Journal described him as an “old friend of Santa.”)

This entry was posted in Amusements, Celebrations, Spectacles. Bookmark the permalink.