The competition, sponsored by Prairie Farmer magazine, continued into the 1940s. But the first sign that manual corn husking didn’t have a bright future also took place at that 1924 event. A mechanical cornhusker, operating simultaneously with the human huskers, harvested ears of corn at triple the rate of the fastest competitor.

That 1924 contest was won by 52-year-old Henry Niehaus of Nokomis, who shucked 31.64 bushels of corn in 1 hour and 20 minutes (with deductions for husks left on the ears and ears left in the field). The only Sangamon County contestant in the field, Grover Leigh of Curran, finished sixth with 30.35 bushels.

Niehaus and runner-up Pearl Mansfield of Morrisonville went on to place fifth and third, respectively, in the national competition held at Des Moines, Iowa, the next week.

Corn husking was a serious competition in the 1920s, ‘30s and early ‘40s, and Prairie Farmer made elaborate preparations. The promotion started in the spring, when the fields where the contests were to be held were chosen with an eye to giving every competitor an equal chance to win. 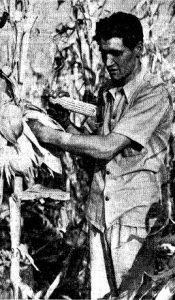 Leonard Jacobs described the contest process in the autumn 1983 edition of the Journal of the Illinois State Historical Society (reg. req.).

Contest fields were planted by mechanical corn planters, which implemented a wire that was stretched and staked at both ends of the field. At 40-inch intervals on the wire was a “button.” As the button passed through the planting mechanism, a drop of from two to five kernels, a hill, was made into the soil. …

An essential part of a cornhusker’s equipment was his favorite hook or peg. Those husking aids made of leather and steel were fitted or strapped onto the hand. …

The V shape of the hook and the metal point of the peg slashed or ripped the corn husks from the ear. Hook users held the ear with one hand while flashing across the corn at about mid-ear with the hooked hand. The other hand immediately pulled back the remaining enveloping husks. The hooked hand then grabbed the ear near the butt end, breaking it from the shank, and then flipped the ear into the wagon drawn at his side.

The 1924 husking bee was the only state-level contest ever held in Sangamon County. Sangamon County competitors also appear never to have placed for the national competition.

Nonetheless, winning the county contest was a point of pride for many local farmers and farm hands. The most successful shucker in Sangamon County was John Copelin (1904-2005), who worked on the A.B. Moore farm near Chatham; Copelin won the county contest five times in the 1930s.

Winning totals in the Sangamon County competition averaged in the low- to mid-30-bushel range. A few competitors elsewhere harvested as many as 50 bushels of corn in their allotted 1 hour and 20 minutes. However, contest totals depended greatly on the fields, growing conditions that year and weather on the day of the competition.

NBC radio began broadcasting the national husking championship in 1929. As a spectator event, husking probably reached its greatest popularity in the late 1930s. An estimated 75,000 to 85,000 people attended the Illinois state championships in Modesto in Macoupin County in 1938.

But it was clear even in the beginning of the Prairie Farmer shucking contest that mechanization was on its way. In its story on the 1924 state contest near New Berlin, the Illinois State Journal reported:

An interesting feature of the session was a demonstration of a mechanical corn husker, which was given at the same time as the contest. In the hour and 20 minutes that the men competed, the machine turned in 94 bushels, it was reported.

This entry was posted in Agriculture, Amusements, Farming. Bookmark the permalink.