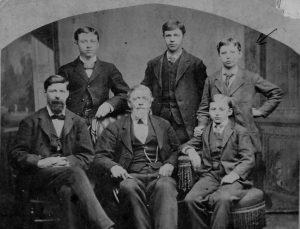 Victim J.C. Hall with five of his eight sons (ancestry.com)

The victims – boarding house operator Martha “Mattie” Withey, retired grocer J.C. Hall and 67-year-old Helen Rose – were among 21 people who lived in “a veritable fire trap” at 620 E. Cook St., according to the newspaper.

The fire, apparently caused by dangerously routed heating pipes, began about 5:30 a.m., when most of the boarders were still asleep. The Journal reported:

The house was an old one, and built before the advent of furnaces. Its flues were not arranged for furnace fires, and have been a source of alarm to nearly everyone who has resided there in the past. The furnace was probably not a good one when at its best.

The furnace chimney ran through a closet that was always too hot to use, boarders told the paper. Likewise, a section of dining room wall next to the chimney was so hot that “that a person could not bear to hold the naked hand against it for any length of time,” the Journal said.

The building, like most at the time, had no fire escapes, and its three stairways were twisting and dilapidated.

The residence was built in a very complex manner, and was a veritable fire trap. On the ground floor there were seven rooms, there were eight rooms on the floor above and in the basement there were but four rooms. Three winding flights of stairs connected the down stairs apartments with those above, and the stairs were poorly built and of a very dangerous character, being steep and irregular.

The most dangerous of the three stairways was the one leading from the Seventh street entrance and hallway to the similar hallway above. It wound about, making a complete circle before reaching the upstairs landing. Several of the boarders stated that it was very difficult to ascend and descend this stairway under the most favorable circumstances and that if one was frightened or agitated it would be almost impossible to get up or down without falling. It was down this treacherous flight of steps that Miss Rose fell to her death, and her burning body rolled to the doorway and across the threshold of the Seventh street entrance. 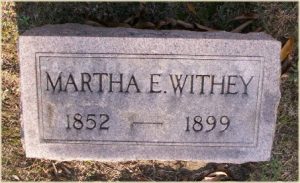 Hall (b. 1818) was incapacitated and could not leave his bed. Withey (b. 1852) got her four children out of the home and alerted many of the other boarders to the fire before leaving the home herself. However, she went back in to try to rescue Hall. Both apparently were overcome by smoke. Their bodies were found near each other.

The Journal story noted two other cases of heroism. Frank Simpson, “the colored driver of P.F. Kimble & Son,” was on his way to work when he saw the fire. Simpson looked in a window and saw a woman – later identified as Mary Hall, the deaf daughter of J.C. Hall – running from room to room in a panic. Simpson broke the window and carried Hall out of the home to safety.

Fourteen-year-old May Withey, Mattie Withey’s daughter, alerted many of the home’s sleeping residents to the blaze. She “probably saved the lives of a number of boarders and members of the family,” the Journal said.

“The horror is the most awful that ever occurred in Springfield,” the Journal summed up. “The victims were all well known and highly respected people, and the terrible accident has cast a gloom over the entire community.”

This entry was posted in Buildings, Disasters, Fires. Bookmark the permalink.