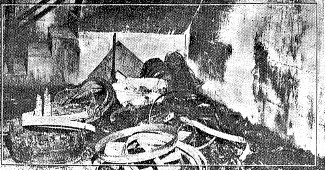 Two firefighters and a janitor were killed when mystery explosions wrecked a storeroom at Springfield High School on March 20, 1932.

A total of 13 people were injured by the blasts, which were never fully explained.

The school’s night watchman and an artist, in the building to paint scenery for a school play, called firefighters after smelling smoke about 7:50 p.m. When firefighters opened the door of the storeroom to search for the fire, natural gas that apparently had collected in the room blew up. The Illinois State Journal had the story:

The fire had its origin in a store room in the basement of the building. This room adjoins the engine room. In this room the gas meters are located.

When the firemen broke through a doorway leading to this store room there was an explosion and an outrush of blue flame. Nine of those burned and injured were caught in this blast.

The second explosion occurred within fifteen minutes, while the firemen were undertaking to subdue the flames. It probably was due to a new accumulation of gas.

The school suffered relatively little damage, thanks to the fact that the storeroom was solidly constructed. But the number of injuries multiplied because as many as 100 people crowded in and near the room following the first explosion, the Journal said.

Hundreds were attracted to the scene and all avenues leading to the rear of the high school were blocked. Policemen fought the surging crowd, and warned them of danger. … (After the second explosion,officers) forced the crowd to retreat and firemen began to play a steady stream of water at the base of the flames. The fire was extinguished in a short time and without difficulty.

Practically all of the ambulances in the city were called to the scene. …

Porter, the school engineer who was among the injured, said some wastebaskets were out of their normal places in hallways before the fire started, leading him and others to suspect someone might have started the fire deliberately.

Speculation on the cause of the fire led to wild stories of incendiarism and bombings. The news spread and soon the telephone system was taxed with anxious inquiries, not only from the immediate vicinity but from all parts of the state. For hours the phones in The State Journal office were busy with calls.

However, assistant fire chief John Gaffigan, who took command of the scene after Durham’s injury, said he believed the blasts were caused by leaking gas, and subsequent investigations turned up no evidence to suggest the blasts might have been caused by an arsonist.

This entry was posted in Disasters, Education, Schools and school districts. Bookmark the permalink.