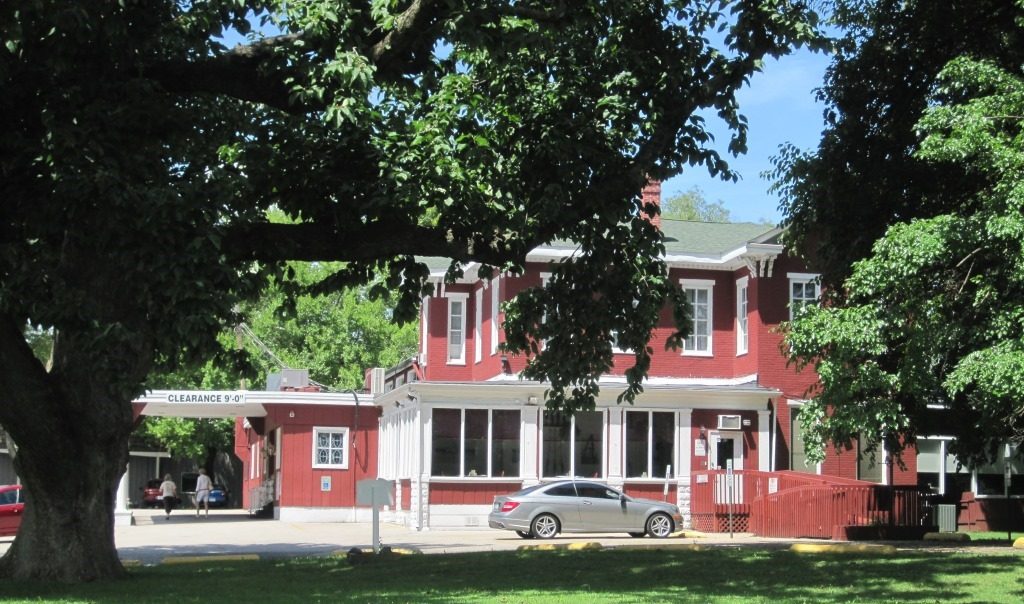 The home that makes up the core of the Chesapeake Seafood House, 3045 Clear Lake Ave., was built sometime after 1857 by John McGredy, a 19th-century Scottish immigrant turned nurseryman.

McGredy apparently first operated a livery stable in downtown Springfield. In 1857, however, he bought property in what then was Clear Lake Township east of Springfield and created a 55-acre nursery he named Hazelwood. According to an 1885 newspaper advertisement, Hazelwood sold “shade trees, fruit trees and evergreens of all kinds, grape vines, strawberry, raspberry and blackberry plants, asparagras (sic), etc, all at lowest rates.”

McGredy lived in the home he built on the nursery property until retiring to Scotland in 1888. He died there in 1890.

Three years later, Agnes McGredy, trustee of the estate, sold the house and its 55 acres for $10,000 to William H. Colby, who had been McGredy’s attorney and agent.

Colby (1849-1904) had largely lifted himself up by his bootstraps. Joseph Wallace’s Past and Present of the City of Springfield and Sangamon County (1904) gave a fulsome descripton of Colby’s rise.

He had not friends here and was dependent entirely upon his own resources for a living, but he soon manifested the elemental strength of his character, and improving each opportunity as it was presented he gradually advanced to a foremost position in the Sangamon county bar.

Colby, who came to Sangamon County sometime before 1863, went to work for the Rev. George Bergen (whose farm, now Bergen Park golf course, is across Clear Lake from the Chesapeake House). He kept that job for 10 years while also studying law. According to The Past and Present:

He worked by the month and during that time did whatever he could to advance his education. Becoming imbued with the desire to make the practice of law his life work, he borrowed law volumes from the Hon. Charles A. Keyes, which he read in the evenings and on rainy days, when work in the fields was impossible. He did not make known his intention or plans for a long time, but kept his books hidden in a wheat bin and studied as he found opportunity.

Colby finished his legal education with the Springfield law firm of Patton and Lanphier and was admitted to the bar in 1878. Among his later partners were William Herndon, Abraham Lincoln’s last law partner. Colby also served a term as city attorney and was a member of the Springfield Park Board.

Colby was elected Sangamon County’s first probate judge in 1902, a post he still held at his death two years later. The Past and Present summed up his abilities:

He was an orator of considerable ability, pleasing in manner, skillful in the arraignment of his adversary and possessing the faculty of so holding the attention of his hearers as to make them eager to catch the next sentence. …

He was a man of forceful individuality and of strong intellect and made excellent use of his powers throughout a professional career which has won for him the honor and respect, not only of his colleagues, but also of the general public, and Springfield numbered him among its representative men.

The house was occupied by J. Leslie Hall (1862-1936), Colby’s son-in-law, for more than a decade after Colby died. Hall married Colby’s oldest daughter, Honoretta (1877-1965), in 1904. The Halls and their two children, Colby (1904-64) and Oliver) 1907-08) are buried in the Colby family plot at Oak Ridge Cemetery. Perhaps not coincidentally, Hall also served on the Springfield Park Board and worked as deputy probate clerk. (This paragraph has been edited to clarify the relationship between the Halls and Colbys.)

In 1912, when the park board bought the old Bergen farm as the site of a new east-end park, Hall was district secretary (the equivalent at the time of president or chairman). The former McGredy/Colby property was not considered for the new park, but Hall did hold a fried-chicken luncheon on the lawn of the old house when the site selection committee toured the area in July 1912.

It isn’t clear how the building was used for most of the next few decades, except that the Washington Street Mission bought the home and five surrounding acres in 1922 to create Washington Hall, a home for wayward girls. Washington Hall, however, lasted less than four years.

The rest of the old nursery property was subdivided about 1923 by Colby’s daughter, Mabel Priest. The new streets reflected the site’s history as a nursery (Linden and Magnolia) and its most prominent owner (Colby).

Otherwise, the house goes unmentioned in both newspaper articles and Springfield city directories until January 1948, when Venette Hullett opened the building as the Southern Air restaurant – “where savory dishes of the South await your pleasure.” 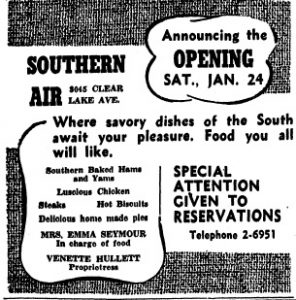 Hullett and her husband James, who sold typewriters for several local companies, previously had lived at 3017 Clear Lake Ave., just west of the former Colby mansion. Venette Hullett sometimes gave lessons in business etiquette, including “telling qualities of a secretary” and “dealing with the public over a counter.”

Her husband regularly brought out-of-town tourists to the Lincoln Tomb, according to Herbert Wells Fay’s daily “Lincoln Tomb Notes” column. In one 1943 visit, Fay wrote, Hullett delivered “a heater that will help to make Lincoln’s Tomb a place livable.”

The Hulletts moved into the Southern Air building, and Venette Hullett continued to operate the restaurant after her husband’s death in January 1955. However, she married a Chicago man, John Oberly, that December, and Hullett sold the restaurant to the Crifasi family in 1956.

The Crifasis, Hazel and Jack, extensively remodeled the building, and the new Southern Air opened on Jan. 20, 1957. The Crifasis promised to continue serving “the matchless food for which (the Southern Air) has become famous” in a setting that “depicts the gracious living of the Old South.”

By 1974, the restaurant was being managed by sons Jack and Tony Crifasi. They told State Journal-Register writer Mick Cochran their parents “almost went bankrupt 500 times.” As of that point, however, Cochran wrote that the Southern Air was “one of the most successful eateries in Springfield.”

That prosperity didn’t last. The Southern Air closed with no notice in December 1984.

Dennis Joslin, a Tennessean with extensive restaurant experience, revamped the restaurant’s menu, emphasizing seafood, and reopened it as the New England Lobster House in February 1985. A couple of years later, Joslin later changed the name to Chesapeake Seafood House.

Note: As of July 2016, the house’s history on the Chesapeake Seafood House web site contained several errors. The web site misstates the size of the property when owned by John McGredy and William Colby, the origin of the name Hazelwood, the year the Crifasis took over the Southern Air, and the date of the Joslin purchase. It also omits the period when the restaurant was known as New England Lobster House.

In addition, newspaper stories about the different restaurants frequently date the founding of Venette Hullett’s restaurant as 1930; city directories and other newspaper files, however, make it clear she founded the Southern Air in 1948.