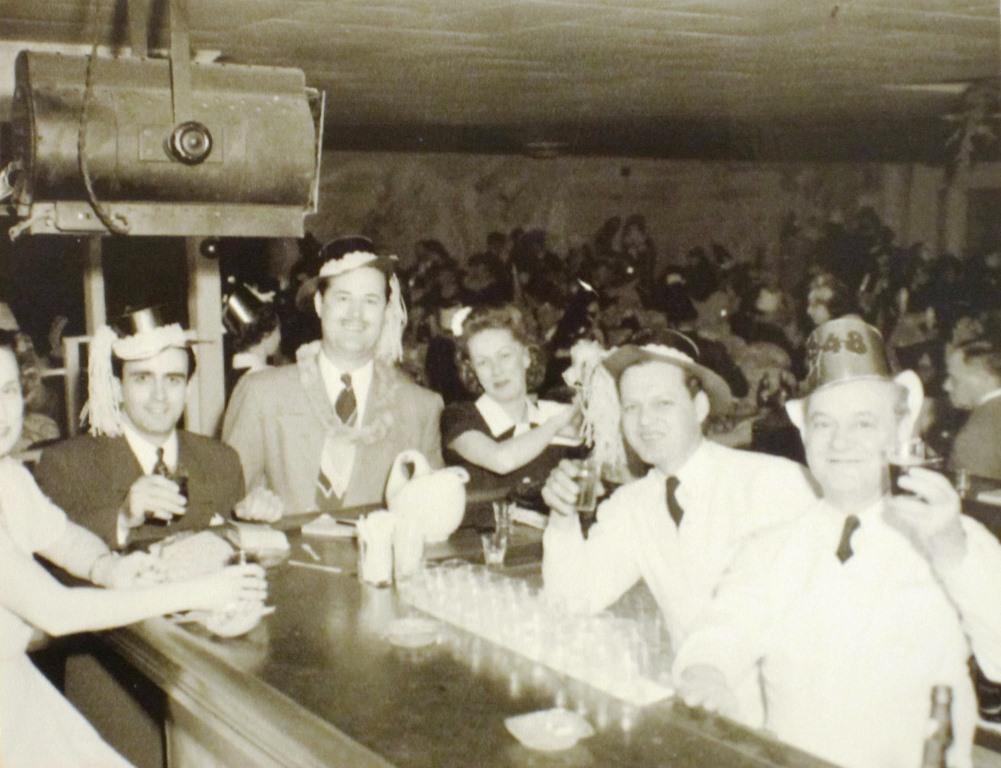 New Year’s Eve 1947 at the Lake Club. Co-owner Hugo Giovagnoli is in the dark suit at left; next to him is doorman and maitre d’ Carl Turvey.  (Sangamon Valley Collection)

The Lake Club, 2840 Fox Road, brought top national performers – Mickey Rooney, the Mills Brothers, Guy Lombardo, Pearl Bailey, Lawrence Welk and many more – to Springfield in the 1940s, ‘50s and ‘60s. But make no mistake. The Lake Club made its money from its back room, where gambling reigned supreme.

“How do you think they afforded the big names?” Ted Pleshe, who worked in the gambling room, told The State Journal-Register in 2004. “The town was wide open back then.”

The Lake Club, managed by Hugo Giovagnoli and Harold Henderson, opened in April 1941 in a building that had been the site of a series of previous entertainment venues. The builder and first owner was Gertrude Joy (1884-1972), already known in Springfield as the proprietor of Joy’s Café, a Chinese restaurant in the 100 block of North Fifth Street. Joy spent $75,000 to build the O’Joy Inn on part of a farm she owned at the southeast corner of Bunn Park.

In addition to a restaurant, the inn could accommodate as many as 2,000 dancers, according to Roy G. Gooden’s “Making the Rounds of Nite Clubs” column in the April 12, 1926, Illinois State Journal:

It is the only place of the kind in the middlewest, an elaborate Chinese garden within doors, for winter and summer merry-making.

The formal opening of O’Joy Inn will be held two evenings with a round of events afterwards.

The dance hall apparently was unsuccessful, and in 1929, the O’Joy converted its dance floor to a 62- by 180-foot roller-skating pavilion. “Music is furnished for skaters by a Wurlitzer military band organ,” the Illinois State Journal reported. Skating lessons were free.

The O’Joy remained in operation until 1933, when, with Prohibition over, the Peacock Inn– “a cabaret of distinction” – briefly took over the building. The Peacock closed in February 1934, when remodeling began for a new nightclub, the Villa Valencia.

The Villa, managed by Joe Bardi and Nick Campo, lasted until 1939. Despite the Spanish name and décor, Villa Valencia dinners leaned to Italian cuisine and later, Chinese dishes (cooked by one of Gertrude Joy’s former Fifth Street cooks, Chin Wing).

Campo (1894-1982) discussed his years at the Villa Valencia in an oral history interview conducted by Barbara Herndon in 1974. (This excerpt includes a question from Herndon, in boldface.)

I run the Villa Valencia for about six years. And things were going bad because we had too much expenses. We had to have floor shows for the people, no cover charge. You had to have a band. Fact, one time I had two bands. One for the floor show and one for the dance … people called the Four Cliffs (sic – the band was the Four Clefs). They were well known around here, four colored fellows – real good music. …

The last year that I was there, I lost money. Then I quit. That’s the end of it. …

Well, wasn’t there gambling then at the Valencia?

Yes, but my expenses were too heavy to overcome whatever … See the gamblers, what they were doing at the Villa Valencia was they was paying my rent for the room they were using for the gambling. You understand? That’s all I was getting – just to pay the rent for the building as a whole. As I said, I closed the Villa Valencia. I got out of there; I wasn’t doing anything. 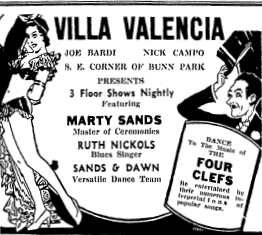 Bardi and Campo staged elaborate floor shows, but the performers weren’t as well known as the Lake Club’s later headliners. A 1937 show, for instance, was headlined by “sky dancers” Betty and Benny Fox, who performed on an 18-inch disc atop a pole. The rest of the evening’s entertainment included:

Adding a touch of the tropics to the atmosphere will be Rita and Manuel Mandoll, the Hawaiian strollers. … The Missourians, a popular dance band, will furnish music throughout the night. 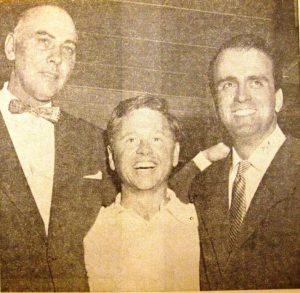 “These people” were the Lake Club’s Henderson (1908?-1977) and Giovagnoli (1912-88). Giovagnoli, who had promoted dances in Taylorville, Henderson, from Streator, and a third partner, Joe Chlebus, put up $3,000 each to start the club, according to a 1973 retrospective written by State Journal-Register reporter Mick Cochran. (Chlebus sold out to his partners early in the Lake Club’s existence.)

“From the first dance it seemed like we almost always played to a capacity crowd,” Giovagnoli told Cochran.

The famed nightclub ultimately succumbed to television, changing tastes in music and a back-tax debt. And there was one more factor, Cochran wrote.

But ask Harold or Hugo why the Lake Club closed and they’ll say immediately, “Gambling was taken away and the people didn’t support the club.”

Gambling supported the club’s entertainment in the same way that the cover charge did. … But even if gambling didn’t pay for the entertainment, it still would have drawn crowds, Hugo said, because people enjoyed it.

Even in a wide-open Sangamon County, the Lake Club stood out as a gambling den. In a 1948 exposé, St. Louis Post-Dispatch investigative reporter Roy Harris identified four full-fledged casinos operating in and around Springfield. Three of the clubs paid $250 a week to Frank Zito’s mob organization for law enforcement bribes, Harris wrote. The Lake Club’s tab reportedly was $500 weekly.

Authorities began to tighten their enforcement of gambling laws in the late 1940s, but The Lake Club avoided a shutdown for at least another decade. Henderson refused to testify before a Sangamon County grand jury in 1953, and it wasn’t until 1958 that two Illinois State Police investigators finally managed to infiltrate the notorious back room. Authorities raided the club in December 1958, the Illinois State Register reported.

Two troopers said they spent some time in the Lake Club and finally were invited to a “game.”

A billiard table, which officers said was used for a dice table, was confiscated, weighed over 750 pounds and was completely taken apart before it could be moved by a transfer company.

Also confiscated were several pairs of dice and a box of notes, “IOUs,” and records were taken by the state’s attorney’s office.

Giovagnoli, Henderson and Pleshe were charged with gambling violations, but the outcome of the charges doesn’t appear in newspaper records. In any case, the Lake Club remained open.

Big-name acts became fewer, perhaps because gambling receipts no longer subsidized the club’s performers. Every once in a while, however, a national act, such as then-popular comedian George Gobel in 1963, would still appear on the Lake Club’s Little Room stage. 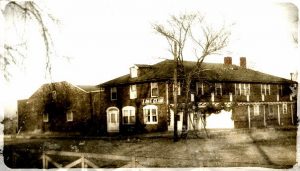 The Lake Club during its heyday (troytaylorbooks))

The Lake Club never officially closed, hosting local club meetings, fundraisers and dinners into at least 1970. The last big name to play the Lake Club, however, probably was fan-dancer and striptease artist Sally Rand, who, at age 65, appeared at the club during the 1969 Illinois State Fair.

Giovagnoli owned the club building until his death in 1988.

The Lake Club had one last flurry of publicity in 1980, when it was disclosed that three Catholic priests had been called in the year before to soothe “the restless soul” of a former bartender who had killed himself in the club. New operators of the club claimed a series of odd occurrences – an eerie chill, spectral footsteps, doors opening on their own – had convinced them the building was haunted. They blamed the ghost of Albert “Rudy” Cranor, who shot himself in the chest in the club on June 27, 1968.

The blessing – the priests emphasized it was not an exorcism – apparently worked. People working in the club said they experienced no more strange phenomena after the priests’ appearance.

Several attempts to revive the spirit of the old Lake Club, including a disco named the Sober Duck, failed over the next decade,

Gertrude Joy’s old building finally burnt down in the early morning of Aug. 16, 1992. Investigators said they found evidence that the fire was caused by an arsonist, but no one was ever accused of the crime.

Note and hat tip: While the Lake Club’s roster of entertainers over the years was certainly extraordinary, newspaper files may not reflect every star who played the club. For instance, Lake Club ads make no mention of appearances by Bob Hope, as SangamonLink’s original entry said. However, reader Runyon Henderson (see comment below), a relative of Harold Henderson, says stars appearing at the Illinois State Fair often would go to the Lake Club afterwards, as guests, and then do impromptu late-night shows there. Hope may have done so after any or all of his three state fair appearances during the Lake Club’s existence — in 1950, 1960 and 1967. Thanks very much to Runyon for the information.

(However, another supposed Lake Club performer, Ella Fitzgerald, apparently never played the state fair, and a check of newspaper clippings turned up no evidence that she ever performed elsewhere in Springfield, either. SangamonLink would welcome any reader information to the contrary.)

Another hat tip: This entry originally said the New Year’s Eve party shown in the top photo was in 1957. However, sharp-eyed reader Bob Cavanagh pointed out that the hat of the reveler on the right says “1948,” indicating the party took place on Dec. 31, 1947. The photo caption has been corrected. Our thanks to Bob.

And one more: Thanks also to commenter Mary Ann Edwards Tiedemann, niece of Hugo Giovagnoli, for identifying Carl Turvey in the top photo.

21 Responses to The Lake Club