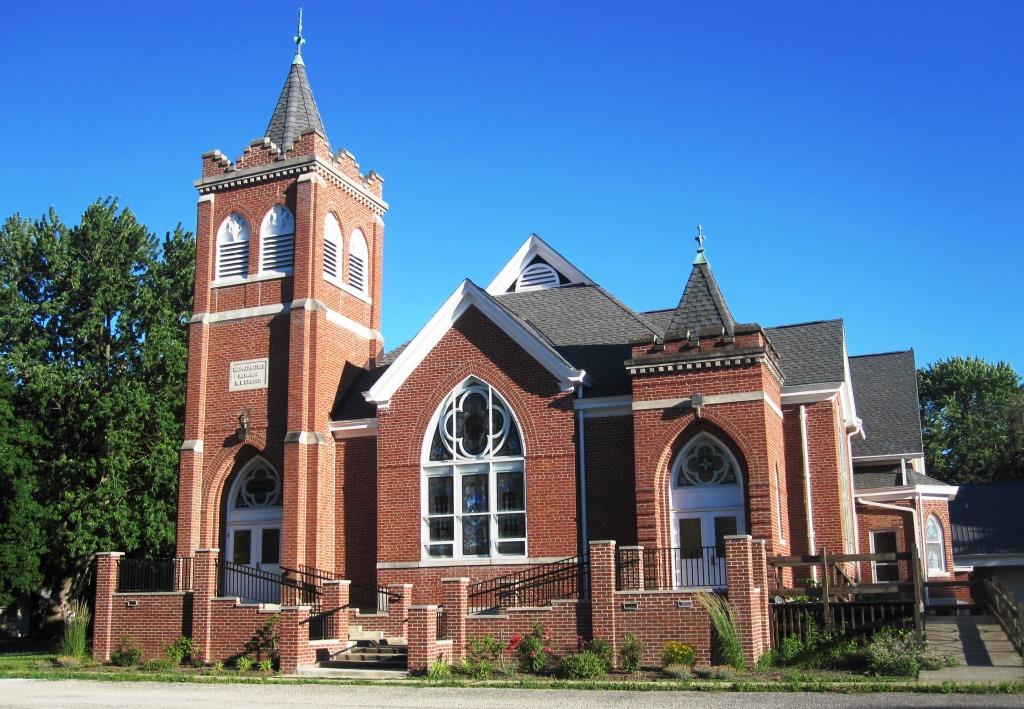 Williamsville United Methodist Church, 2016. The stone nameplate on the steeple still says “Mary J. Prather Memorial M.E. Church,” the name given the church when it was built in 1903. (SCHS)

A 2007 church history says Williamsville United Methodist Church can trace its history to “religious exercises” held in the area, probably by the Rev. Stephen England of Cantrall, in 1820. The area’s first Methodist Society was formed near Spaulding in 1821. The Rev. John Grandville preached the first sermon.

However, Williamsville didn’t organize its first Methodist congregation until 1856. The first church building – a frame structure 35 feet long and 55 feet wide – was erected in 1857. A hall and belfry were added later (the original bell was still being used as of 2007). The Rev. William Fletcher Short was the first minister.

Two of the church’s early ministers, William Rayburn (1867) and C.A. Obenshain (1875), became controversial when they broke from Methodism and formed the cult-like “Pilgrim movement,” which practiced faith healing and, according to opponents, free love. (Rayburn is remembered locally largely because he had a 48-foot-tall monument erected in Springfield’s Oak Ridge Cemetery to mark the grave of a woman said to be his wife.)

In 1950, volunteers, working by hand, dug a basement under the entire church in order to provide room for recreational facilities, a kitchen, and a new furnace. The 2007 church history outlined the project – and the disaster that nearly undid the work.

Jesse Moyer disposed of the dirt removed by the diggers, who put it on a conveyor to elevate it out of the hole into a truck. Many of the farmers sent their hired hands in to help when there was time between farm chores. Frank Brawner, James Shaver, and Ben Yokley built most of the basement walls and John Saffer and Clarence Wilcockson did the electrical work. Robert Erdmann donated and installed the tile for the basement floor. Ben Yokley built cabinets for the kitchen and Robert Erdmann helped install them. Ben Yokley built the partitions to separate the basement Sunday school classrooms.

The congregation was eagerly anticipating and planning a fiftieth year celebration of the church building for Sunday, October 16, 1952, when a tornado struck on Wednesday, June 27, 1951, sweeping through the community and damaging about twenty homes. The Methodist Church was the hardest hit. About one fourth of the building was destroyed along with extensive equipment destruction; there was so much damage to the church building that it practically had to be rebuilt.

Rev. Charles Withrow held worship services in the Williamsville High School gymnasium for about eight months until the church could be rebuilt.

Insurance covered most of the damage, and the congregation decided to redecorate the sanctuary as part of the rebuilding process. The pulpit area and choir loft were remodeled, and a new altar, lectern and baptismal font were installed, among other changes.

The renovated church was dedicated on Oct. 26, 1952. An education building, added to the church complex in 1964, contains church offices, classrooms, restrooms, a roofless meditation area and a conference room/kitchenette.

Another major reconstruction project was made necessary when one or more bolts of lightning hit the church steeple about 9:15 p.m. Oct. 15, 1992. The strike blew about one-third of the steeple off the church and did electrical and other damage elsewhere in the building. Repairs came to about $18,000, all of which again was covered by insurance.

More information: This entry is condensed from the far more detailed WUMC 150 Year History, compiled by a committee headed by Sarah Benner for the Williamsville United Methodist Church’s 150th anniversary in 2007. Included is a list of WUMC pastors.

Hat tip: Thanks to Donna Catlin for drawing our attention to WUMC’s history.