More than 50 years after Charles Darwin published The Origin of Species, the Illinois State Register devoted seven full pages over the summer of 1914 to the continued controversy over Darwin’s theory of natural selection.

The result was a verbose debate whose participants included people like Booker T. Washington, William Jennings Bryan, Alexander Graham Bell and more than 80 others. But definitely not Pope Pius X. 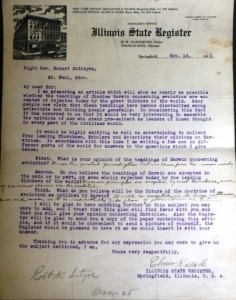 The idea originated with Elmer Kneale, the Register’s idiosyncratic bill collector and an incessant letter writer to world leaders and celebrities. In 1911, with the endorsement of Register publisher Thomas Rees and editor Henry Clendenin, Kneale sent a form letter to dozens of scientists, religious leaders and thinkers worldwide. The letter essentially asked two questions:

First. Do you believe the teachings of Darwin in their general outline remain to-day as a contribution to science?

Second. Do you believe that a majority of intellectual leaders are to-day inclined to accept these teachings?

Kneale published every response he received, long or short. The answers ran on seven consecutive Sundays between July 12 and Aug. 23, 1914, taking up nearly an entire newspaper page each week.

Kneale didn’t say how many people he queried. It’s also impossible to determine exactly how many answered Kneale’s letter, because copies of the July 19, 1914, Register available today don’t include that day’s page of Darwin letters. The six existing pages, however, include a total of 74 responses – all from men, incidentally; if Kneale wrote to any women, none apparently answered.

While most of Kneale’s correspondents were from Europe and America, Kneale contacted thinkers throughout the world, and the letters he received included contributions from China, Japan, South America, the Middle East and the South Pacific. In his July 12 introduction, Kneale wrote:

Most of the letters have been published in full; the only exceptions being some of which but a part could be given in order to keep the symposium within the allotted space. And this I regret; for I am mindful of the pains that have been taken and of the kindly interest manifested by the writers. Great care has been taken to secure an authentic translation of the letters which were written in foreign languages, and in every case the translation conveys correctly and fully the thought set forth in the original letter. 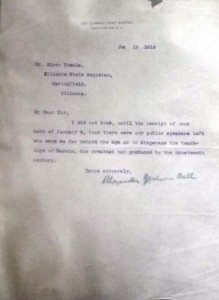 Many of Kneale’s correspondents wrote long, dense treatises. Some of the most pointed, however, were short and direct. Alexander Graham Bell got right to the point.

I did not know, until the receipt of your note of January 6, that there were any public speakers left who were so far behind the age as to disparage the teachings of Darwin, the greatest man produced by the nineteenth century.

There were such skeptics, of course – most notably William Jennings Bryan, who a decade later would challenge the teaching of natural selection in the famous “Scopes Trial.” 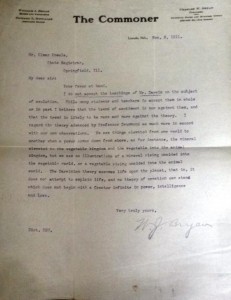 “The Darwinian theory assumes life upon the planet, that is, it does not attempt to explain life, and no theory of creation can stand which does not begin with a Creator infinite in power, intelligence and love,” Bryan wrote.

An Egyptian scholar, Abd El Wahab El-Naggar, said few Moslem thinkers had even read anything of Darwin’s, much less adopted any of his theories.

“… Darwin has very few followers among the learned men of the strict Moslems. I dare say he has none at all and will not have any Moslem followers in the near future,” he wrote. (El-Naggar’s letter, written in Arabic, was translated by Mary Najim, a Springfield resident of Syrian descent.) 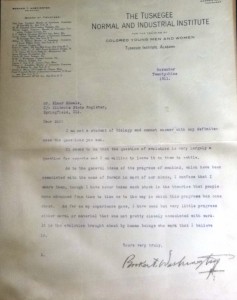 Booker T. Washington ignored Kneale’s questions and instead pointed to his own approach to human improvement.

It seems to me that the question of evolution is very largely a question for experts and I am willing to leave it to them to settle. …

As far as my experience goes, I have seen but very little progress either moral or material that was not pretty clearly associated with work. It is the evolution brought about by human beings who work that I believe in.

Kneale, who was very active in local church activities, included a variety of Christian clergy in his Darwin solicitations. Summarizing his findings on the last day of publication, Kneale reported that “inasmuch as so many leaders of Christian thought accept the teachings of Darwin, or, at least in some degree, accept the general doctrine of evolution, we must acknowledge that this doctrine has become a permanent factor in the modification of our religious thinking.”

One religious leader Kneale never could draw out on the subject, however, was the Pope. Kneale made at least two appeals to Pope Pius X for a comment on evolution, but both were turned down. One papal secretary was especially waspish in his response to Kneale (emphasis in original):

I never present such petitions to His Holiness.

Hat tip: The originals of many – perhaps all – of the responses to Elmer Kneale’s symposium on Charles Darwin are owned today by Robb Paul of Springfield’s Prairie Archives. Our thanks to him for alerting us to Kneale’s Darwin project and for giving SangamonLink access to the letters.

This entry was posted in Arts and letters, Media. Bookmark the permalink.