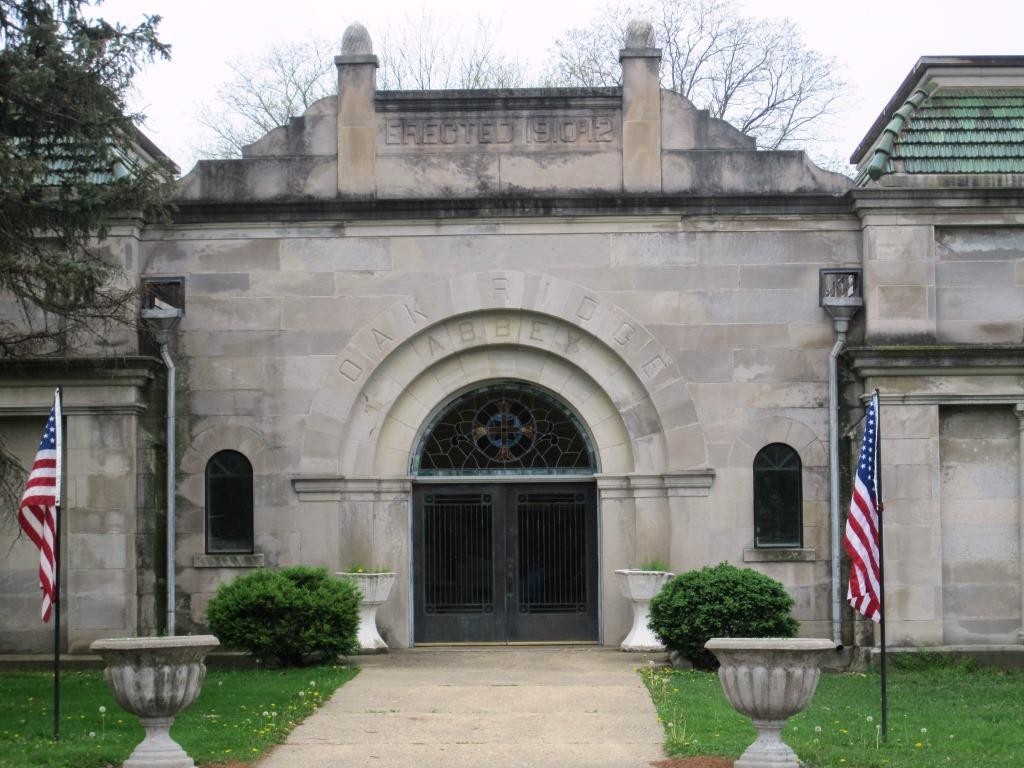 When Springfield’s first mausoleum was built, its builders played on people’s fears of disease, grave robbery, decomposition and neglect. What’s more, they promised, interment in the Oak Ridge Abbey would protect against the possibility of premature burial.

The interior of each compartment is so constructed that … where there is the slightest doubt as to death having taken place, life saving measures may be taken, so that resuscitation shall mean restoration, instead of the unthinkable horror of a return to consciousness beneath seven feet of earth.

The Abbey was built between 1910 and 1912 just inside the Monument Avenue entrance to Oak Ridge Cemetery and, as mausoleum advertisements pointed out for decades, “within the very shadow of the Lincoln monument.”

The Illinois State Register published a two-page special section advertising the Abbey on Nov. 21, 1910. More than a century later, the sales pitch reads almost like a parody, with its appeals to turn-of-the-20th-century sentimentality, squeamishness and morbid fears.

It promised that the mausoleum’s locked gate would prevent body snatching (“much more common than any of us wish to believe”). The section also warned that gases given off following in-ground burials could cause disease, while the Abbey’s sanitary system (which involved formaldehyde) would result in “dessication, instead of the usual process of decomposition.”

In a statement, the Abbey’s management pulled no punches.

An overpowering wave of sentiment in favor of civilized burial is sweeping the world. A new light – “Mausoleum Entombment” – is driving into oblivion the gruesome two-thousand-year-old savagery of burial beneath the earth.

We, a group of men thoroughly convinced of the revolting conditions of ground burial, have started the great movement of “Mausoleum Entombment” throughout our country, that has awakened the people to the dangers and horror of ground burial to the extent that “Mausoleum Entombment” is being provided in every state in the Union, and as well as in “Oak Ridge Abbey” within the borders of America’s most noted cemetery. …

Deep thinking people can readily appreciate the tribute to our dead, embodied in “Mausoleum Entombment.” It eliminates the dropping of the coffin into the grave; the sexton with the ready spade; the agonizing grief during the first hard rain after burial. All this has no place in today’s civilization. Two thousand years ago, in the days of barbarism, those untoward things were not repulsive, but today civilized refinement finds them revolting.

The Abbey (the name was meant to invoke Westminster Abbey in Britain) was built with crypts to hold 1,051 remains. Its developer, the National Mausoleum Co., claimed, improbably, that construction cost $250,000 (that amount would have guaranteed a loss for National Mausoleum). Work  began in 1910 and was finished in 1912. 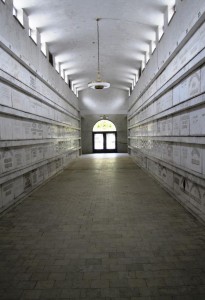 The building’s exterior is Bedford stone faced with tile. Interior facing is white marble. Inside, three parallel corridors, five crypts high, run end-to-end, with four private family tombs – each with its own gate and key – in the corners. Each crypt – two feet high, 2½ feet wide and seven feet long – is made of reinforced concrete, again with marble facing. A locked gate keeps the public out of the building, but the families of people interred in the mausoleum are entitled to their own keys.

The mausoleum company paid the cemetery $13,000 to buy the site of the Abbey and contributed another $5,225 in 1912, which, with interest, was supposed to “forever provide for the up-keep of the building.”

Initial interest was promising. The first interment took place while construction was still under way. W.S. Dyer, who farmed west of Springfield, had “requested frequently that he be buried in the mausoleum when he died,” the Register reported on Oct. 3, 1910. “He became a great admirer of this ‘better way,’ and was often a visitor at the cemetery while the mausoleum was in construction.”

More than 100 crypts had been sold by the time Oak Ridge Abbey was dedicated on Sept. 8, 1912. Octavia Roberts described the ceremonies in the next day’s Illinois State Journal:

“In spite of the intense heat hundreds of people were present to listen to the speeches and the musical program,” she wrote. (Speakers included Springfield Mayor John Schnepp, although Gov. Charles Deneen declined his invitation.)

At the end of the program the audience was invited to inspect the mausoleum.

No one who passes through the wide and dignified corridors, lined with white marble, the afternoon sun filtering through stained glass, but must acknowledge that the National Mausoleum company has done its work well. …

Whether we believe in interment in the earth or not, and hundreds of persons will always prefer to lie under the shade of trees in God’s open air, we cannot but acknowledge that sufficient arguments can be advanced for the mausoleum to make its existence desirable. …

Death at the best is a terrible thing. If we can cheat it of one iota of its horror let us do so.

Mausoleum officials opened an office in downtown Springfield’s Ferguson Building, but sales of crypts never met their original optimistic predictions. The National Mausoleum Co. also suffered financial reverses in its home state of Ohio, and the Oak Ridge Abbey went through a half-dozen owners over the next 40 years. 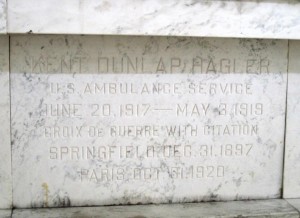 The crypt of Kent Hagler, co-namesake of Springfield’s chapter of the Disabled American Veterans (SCHS photo)

Finally, in 1950, the Abbey was deeded to the cemetery for a token price of $2 – $1 paid to the then-owner, the Sangamon Mausoleum Co., and the other $1 to the Illinois National Casualty Co., holder of the mausoleum’s mortgage. The building had been valued at $196,000 in 1936, an Illinois State Journal story said, “although its present value is said to be less than that amount.”

Depleted endowment funds which have, since the structure was completed in 1912, been insufficient to permit proper maintenance of the abbey have been stated as reasons for the transfer of ownership. Oak Ridge officers stated that about $20,000 will be required to repair the abbey.

About 250 crypts remained unsold in 1950. As of 2016, Oak Ridge Cemetery executive director Mike Lelys said about 1,000 of the 1,051 crypts had been sold, although not all of those were occupied. In some cases, the owners were still alive, while other crypts, though sold, have never been occupied.

Hat tip: To former cemetery director Mike Lelys, for his research help and tour of the Abbey.

This entry was posted in Architecture, Buildings, Local government. Bookmark the permalink.