What now is known as Daylight Saving Time was first instituted on Easter Sunday, March 31, 1918, as a way to save fuel to support U.S. soldiers in World War I. 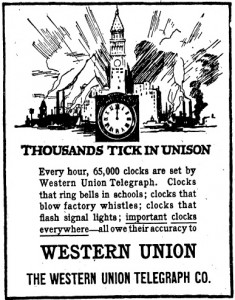 In Sangamon County, the main inconvenience was to churches, most of which adjusted their Easter services to conform to the new “clock time” (as opposed to the old “sun time”) and railroads, whose scheduled trains lost an hour to the change.

Also challenged by the time change, however, was Western Union, the telegraph company, which synchronized thousands of battery-operated “self-winding clocks” around the U.S., including many in Springfield. Company workers had to manually advance the time on each of those clocks.

The large clock at the city hall, and all street clocks will receive attention by their care takers so they will not carry deception to the public. There are almost two hundred clocks in the city controlled by Western Union wires. Employes of the company set some of these ahead last night and were aided by patrons in many instances. …

Probably only one of the employes of the city found inconvenience in observing the time advance. That was Patrolman Botzke* of the night shift who found that it was impossible to be in two places at once at 2 o’clock this morning. He is supposed to “pull” a box every half hour and when 2 a.m. came he turned the hands of his watch to 3 a.m. He was supposed to be two blocks from the place at 2:30 a.m. to pull a box. … By reporting to the station operator he was released from his plight when the records were made to show a one hour lapse of time.

If anything, more area residents were confused when the U.S. reverted to standard time on the last Sunday of October. Among them were the people who were supposed to adjust two of the city’s most prominent clocks, the Journal reported.

“My goodness! Is it that late?” pedestrian and motorists would remark when they looked at the clock over Dodd’s drug store. And some one would reply:

“No, they just forgot to set the clock back.”

The city hall clock, deprived of the setting back process, kept marking time an hour ahead yesterday until late in the afternoon, and when it received attention, and was supposed to be fixed for standard time, it was one stroke short in striking the hours.

*Editor’s note: The newspaper didn’t give the first name of “Patrolman Botzke,” but his last name probably should have been spelled “Butzke” anyway.

This entry was posted in Local government, Science. Bookmark the permalink.