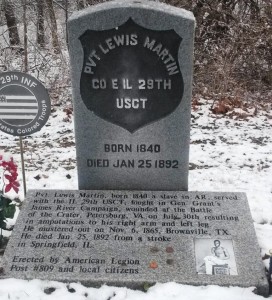 Regimental designations refer to the U.S. Colored Troops (infantry), Colored Cavalry or Colored Artillery. Burials at Oak Ridge originally were segregated by race; cemetery blocks 5 and 24 were designated for African-Americans. “GAR Mound” refers to the Grand Army of the Republic Mound, located north of the Lincoln Tomb State Historic Site; some veterans of both races are buried there.

Heyworth also played a key role in the placement of a gravestone and historical marker on Martin’s previously unmarked grave at Oak Ridge Cemetery. Our thanks to Heyworth for bringing the book to our attention. Private Lewis Martin is available at Prairie Archives bookstore on the Old Capitol Plaza in Springfield at $10 per copy. The book is $12 (postpaid) directly from Heyworth; email kathyheyworth@gmail.com.

This entry was posted in African Americans, Military. Bookmark the permalink.