The last person executed in Sangamon County went to the gallows with a new suit, a plucky attitude and one last request – no women were permitted to witness his hanging. 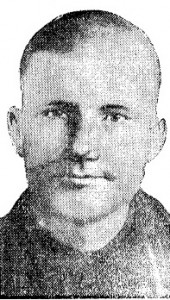 Hayes, who worked on the farm, had been fired after Flatt’s 12-year-old daughter complained of his “unwelcome attentions.” When Hayes was dismissed, the girl said, he threatened to return and kill both women.

Hayes did return that night – May 24, 1927 – and broke through the door of the women’s bedroom with an ax as they ran out the door. The girl escaped, but her mother tripped on a screen door in the yard. Hayes struck Mrs. Flatt in the head with the ax. She died a few days later at St. John’s Hospital.

Hayes was found guilty in July, despite his attorneys’ arguments that he was “mentally deficient,” and sentenced to death.

The Illinois legislature already had rewritten the state’s execution law to require that all death penalties be carried out by electrocution at a state prison, but the law applied only to crimes committed after July 1, 1927.

Hayes’ cooperative attitude during his trial and stay in jail impressed authorities enough that they saw to it he went to his death wearing a donated new blue serge suit, white shirt and figured bow tie. “His brown shoes were highly polished,” reported an anonymous Illinois State Journal reporter who witnessed the hanging. 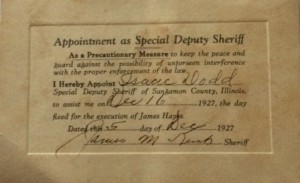 Isaac Dodd of the New Berlin area attended the Hayes execution as a special deputy sheriff. The admission pass is signed by Sheriff James Kent. (Contributed by Gene Dodd)

Canvas screened the gallows (borrowed from Macoupin County) from the view of about 1,000 onlookers who gathered outside the county jail yard for the event. Only people with admission passes, including a dozen physicians, watched the hanging. At Hayes’ request – no explanation was reported – women were excluded from the group of witnesses.

Against all odds, Hayes kept his spirits up to the end. The Journal described the scene.

Hayes went to his death with an air of gameness that marked him since the day of his arrest in a district school house near Berlin. …

The slayer went to his death smilingly, with no apparent disappointment because a last legal effort by Attorneys Edmund Burke and W. Edgar Sampson, to halt the hanging, failed. When told that courts had closed their doors to him he said he was ready.

“You won’t have any trouble with me,” Hayes said as he shook the hands of his jailers for the last time. “I will walk all the way.”

Funeral services were held at the Cathedral of the Immaculate Conception, after which Hayes’ body was taken to Mound City, the home of his mother, for burial.

Note: This entry has been corrected. The date originally given for Hayes’ execution, Dec. 17, was wrong. Our apologies.

This entry was posted in Crime and vice, Law enforcement, Sangamon County. Bookmark the permalink.