Pawnee High School was demolished by a fire on Feb. 24, 1958, that was ignited by a student attempting to break into the school’s vault. 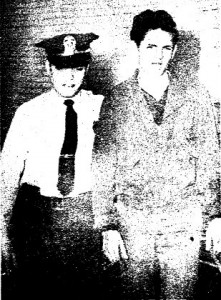 Frank Carlos Ewing Jr., 15, admitted to Sangamon County sheriff’s investigators that he broke into the school intending to burglarize the walk-in vault. When the vault withstood a sledge hammer, crowbars and hacksaws, he decided to use a blowtorch from the school’s woodworking shop on the door.

However, Ewing said he spilled gasoline while filling the torch, and the gas ignited when he struck a match to light the torch. Flames enveloped the blowtorch itself, Ewing told investigator Paul Terril, and when he threw the torch away from him, the blaze rose quickly to the ceiling of the school office.

The school – which had been built after a lightning fire destroyed its predecessor in 1923 – was demolished. Damage was estimated at $400,000.

The Pawnee school system built another new high school on the site of the previous two; it was dedicated on May 1, 1960.

Ewing was arrested in class a month after the fire. He not only admitted that he had accidentally started the blaze, he told police he also had burglarized the high school once before and the grade school twice in a month. He also said he had gotten $8 cash and $300 worth of merchandise in a drug store burglary.

His motive may have been more than profit, the Illinois State Journal said in a story March 27, 1958.

Terril said the boy told him he is a heavy reader of detective stories and likes such shows on television. Later, however, Ewing said he would have committed the offenses anyway, “for kicks.”

Ewing eventually underwent 10 months of mental therapy at the Alton State Hospital. But that wasn’t the last of his encounters with the Sangamon County court system.

In December 1959, Ewing, then 17 and living in Springfield, and another youth were arrested for laying two railroad ties across tracks west of Springfield in an attempt to derail a freight train. Ewing was sentenced on April 28, 1960, to one to 10 years in state prison for that crime.

Back in the county jail (then at Seventh and Jefferson streets) after his sentencing, Ewing broke away from deputies as his handcuffs were being removed. He then dashed out the jail door and ran through alleys and junk yards in a brief – five- to six-minute – escape attempt. He was caught, “completely spent,” deputies said, at Second and Carpenter streets.

Ewing spent at least part of his prison sentence in the Menard State Penitentiary, where he was joined by his father, Frank C. Ewing Sr. (1920-82), in 1965. The older man, a petty criminal for much of his life, had murdered his aunt and his girlfriend in their home in Johnson City. Both victims – Grace Ewing and Louise Nance – were former residents of Springfield, as was the elder Ewing.

“I guess I’m just an animal,” Frank Sr. told authorities after his arrest.

Illinois State Journal reporter Bob Estill, who wrote a story about the father-son prison reunion, added the detail that Frank Jr.’s grandfather also had spent time at Menard. (The grandfather, Elijah Ewing (1898-1952), was convicted of a holdup and shooting in Herrin in 1929. Following his prison term, he worked as a coal miner and died in a mine accident at Peabody No. 8 near Tovey.)

Frank Ewing Jr. returned to Springfield after his prison sentence. Newspaper records show he was arrested several more times in connection with burglaries, firearms violations and other relatively low-level crimes. When his father died, still in prison, in 1982, his obituary said the younger Ewing was living in California.

Note: Additional information from a family member in comments.