The architectural Bullard family, founded by Samuel A. Bullard (1853-1926), designed many of Springfield’s most prominent late 19th-century churches, schools, and public buildings. It and the firm of Helmle & Helmle are considered the most successful and most accomplished of the capital city’s architectural firms.

Samuel Bullard was born on the family farm in eastern Sangamon county on March 25, 1853. He attended the then-Illinois Industrial University at Champaign, returning to open an architectural office in Springfield.  He spent his entire career in the capital city. 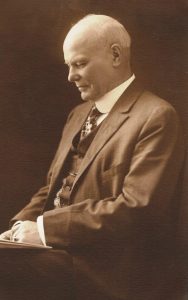 In addition to the founder, architects affiliated with the firm of Bullard & Bullard included Samuel’s brothers, Robert A. (1871-1948) and George W. Bullard (1855-1935). George Bullard practiced in Springfield for a decade before leaving in 1890 to pioneer architecture in the Pacific Northwest. He established an office of Bullard & Bullard in Tacoma, Washington. 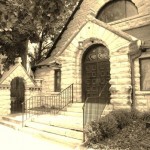 The firm’s Christ Episcopal Church (1888) is a small Richardsonian masterpiece. Christian Laine called it “the city’s most handsome and stunning example of Romanesque Revival architecture, almost minimal in proportions and yet monumental in its beauty.”

The Springfield City Hall of 1893 (since demolished) also showed the influence of the Chicago Commercial Style then practiced by the firm of Burnham & Root. The city hall was a romantic bow to the past, complete with Renaissance tower, as was the State Arsenal of 1901, which was a castle in stone. 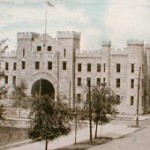 S.A. Bullard also collaborated in 1899 with the Springfield architecture firm of S. J. Hanes in enlarging the Old State Capitol, then in use as the Sangamon County Courthouse, by lifting the two-story structure and inserting a new third floor beneath it.

Many of those projects, such as the Kumler United Methodist and Christ Episcopal churches and the State Arsenal, were done in collaboration with builder and mason Col. James S. Culver.

Samuel Bullard was mayor of Springfield when he died suddenly of a heart attack on Dec. 5, 1926. “Bullard was considered a ‘kindly, courteous and tenacious’  leader, according to his successor, J. Emil Smith,” The State Journal-Register reported in 2010. 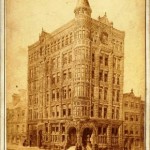 Other scions of the family, Clark W. Bullard and Roger C. Bullard, maintained an office in Springfield as late as the 1950s. Among their designs was the 1894 Illinois National Bank building, a six-story “skyscraper” at Sixth and Adams streets.

Bullards continued to work in Springfield until well into the 20th century. Robert A. Bullard designed his own house at 1313 Leland Ave.; completed in 1906, the house was done in the new Prairie Style of architecture pioneered by Frank Lloyd Wright. Clark Bullard in 1930 designed the Robinson House at 1801 W. Lawrence Ave.. Both houses were honored as official City of Springfield landmarks by the Springfield Historic Sites Commission, although the Robinson House was demolished in 2013.

Note: This entry has been edited to remove a confusing (and possibly incorrect) reference to the Bullard firm’s reported design of “the Lincoln theater of 1880.” It is not clear whether that building existed, or if so, where. In addition, SangamonLink has added photos of Samuel and George Bullard, as well as the birth and death years of all three brothers.