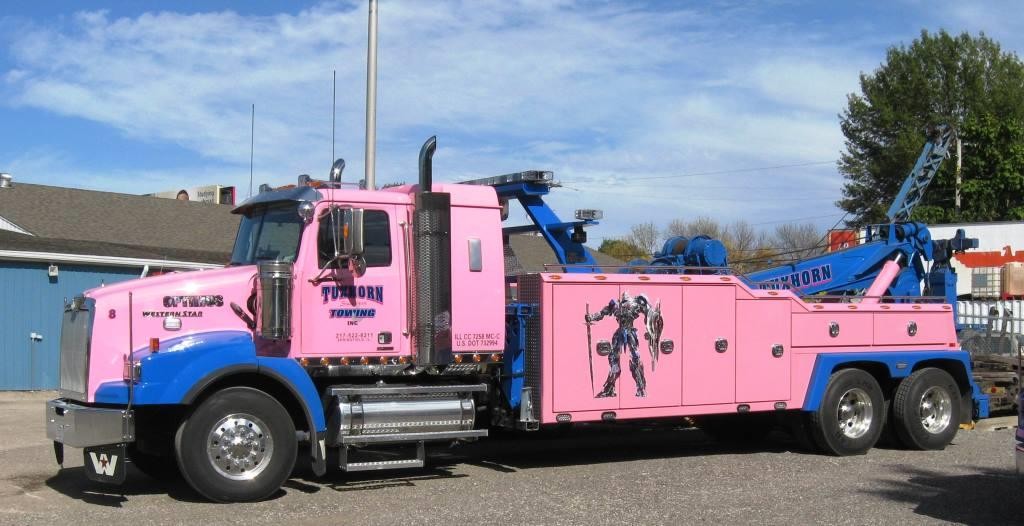 The Tuxhorn operation was a full-service auto repair service at first, but gradually converted to 24-hour towing. (The company’s first tow truck was a converted 1932 Cadillac sedan.) The last year the garage advertised auto repairs in the Springfield city directory was 1967.

Meanwhile, John Jr.  (1918-2000) had decided he wanted to set his tow trucks apart from those of competitors.

“We had white, and they copied that,” Tuxhorn told State Journal-Register reporter Mike Murphy in 1984. “We went to cream and they copied that, too. So the next time I painted them I wanted orchid, but Gerber’s Cleaners had orchid trucks, plus it had to be mixed special.

Most Tuxhorn trucks also are bear names, although the approach changed over the years. Tuxhorn’s earliest tow trucks were named after John Jr.’s daughters, “but we ran out of girls,” Tuxhorn told Murphy back in 1984. Today, the trucks tend to be named in the style of comic-book superheroes, often complete with full-color cartoons of the characters.

This entry was posted in Business, Transportation. Bookmark the permalink.