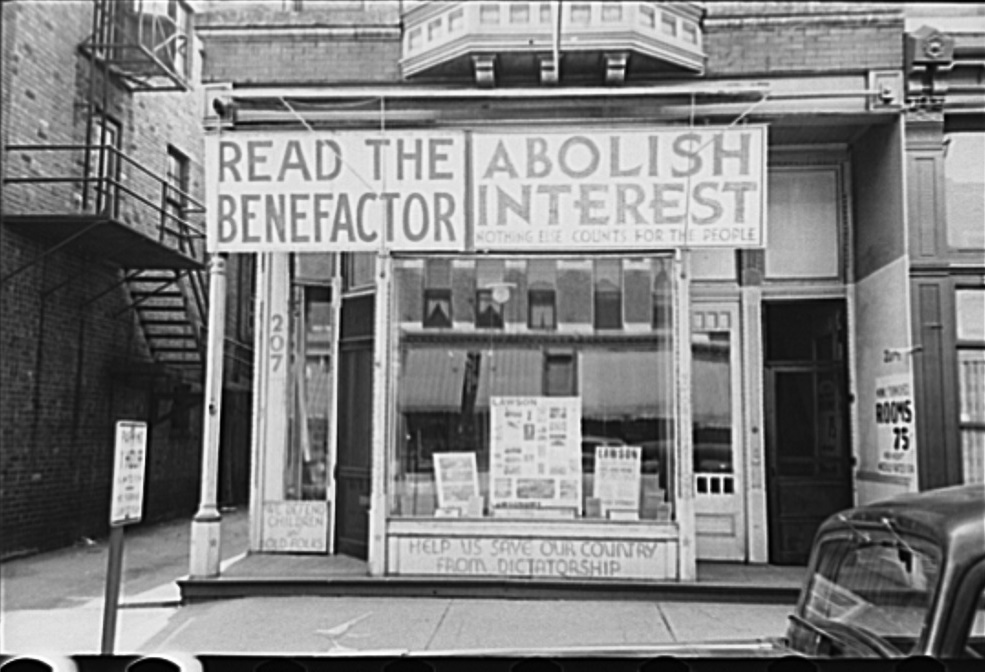 Original caption: “Headquarters of Lawsonomy, Springfield, Illinois.” This was the district headquarters of the Direct Credits Society, part of the Lawsonomy movement, at 207 N. Fifth St. in May 1938; photo by Russell Lee (Yale University database of Farm Security Administration photographs)

Lawsonomy was the general term for a system of philosophy, physics and economics created and promoted by an ex-baseball player and aircraft developer named Alfred W. Lawson (1869-1954). Lawsonomy’s political and economic offshoot was the Direct Credits Society, which, according to city directories, had its district headquarters in Springfield from 1936 until 1942 or 1943.

For all but the last year or two, the society’s headquarters was the storefront at 207 N. Fifth St. shown in the photo above.

It’s difficult to explain the principles behind all of Lawsonomy – the science and philosophy involves esoteric theories about the conflict between “suction” and “pressure.”

However, Lawson’s economic ideas, while no less unusual, appealed to some people suffering through the Great Depression. The membership card of the Direct Credits Society listed the following goals:

Gold must be abolished as money and everybody prohibited from using it to pay for anything.

Paper currency must be made the standard of exchange and issued in sufficient quantities for all purposes.

Interest and all other forms of payment for the use of money must be abolished and prohibited.

Control and supervision of money must be by the government, who will operate all banks and other financial institutions. Private banking must be prohibited.

All financial loans must be made by the government. Private loans in business transactions must be prohibited.

Children, the elderly and the disabled all were to be entitled to enough “credits” to pay living expenses (and for education, in the case of children), according to the card. The full text of Lawson’s book Direct Credits for Everybody (1931) can be read here.

The popularity of Direct Credits petered out as the Depression lifted. Lawson went to found a “University of Lawsonomy” in Wisconsin, but he was forced to sell the school in the 1950s following congressional hearings over allegations that the institution had improperly profited from reselling used war surplus machinery.

The high point of Lawsonomy in Springfield probably took place on Sept. 10, 1939, when Lawson himself – styled the “commander in chief” of the Direct Credits Society – spoke to the “grand assembly” of the society at the Elks Club. According to an advance story in the Illinois State Journal, the speech was to be preceded by a parade from Bond Street and North Grand Avenue to the Elks Club.

“Uniformed officers of the society with band and drum corps in attendance will make up the parade,” the story said. It’s not clear how many participants or watchers the march attracted; there was no follow-up article.

The society’s district leader, George C. Scott (1903?-72?) and his wife Eula lived above the office. However, the most energetic local advocate of Lawson’s Direct Credits principles may have been Walter Kosbab (1894?-1955). 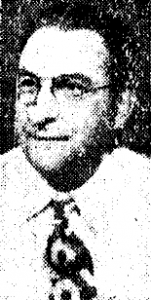 Kosbab, a shoe salesman for much of his life, also was a politician with a leaning for off-center political theories. A member of the Progressive Party in 1933, he ran as a Republican for the state legislature in 1934 and again for the GOP nomination for Congress in 1936; in the latter year, however, he also led the local effort to nominate U.S. Sen. William Borah, a progressive Republican from Idaho, as the GOP candidate for president.

In his own congressional bid, Kosbab advocated a mixed bag of nostrums aimed to revive the U.S. economy from the Great Depression. The Illinois State Journal reported on his candidacy announcement in January 1936:

Kosbab, a member of the Francis E. Townsend Old Age Pension club, the Direct Credits society and the National Union for Social Justice, outlined his platform which he said offers positive remedy for permanent improvements in conditions in the country. He favors the cash payment of the soldiers bonus and would “go the Townsend plan one better” by providing for an age limit of forty-five years. Interest and taxes, he said, must be abolished and he would have doctors, nurses and attorneys paid by the government.

Kosbab’s platform carried little weight with voters. He ran a solid last in the six-man Republican primary, receiving only 87 votes, 350 behind the No. 5 candidate. The GOP nominee, Frank Ramey, collected more than 17,000 votes. (Democrat Frank Fries won the general election.)

Following Borah’s primary election defeat – Kosbab said the Borah effort got a “raw deal” from regular Republicans – Kosbab announced that a third party would field candidates in Illinois in the November 1936 elections. The new party was unnamed, but he said its symbol would be the American buffalo – which, he said, “is capable of overthrowing the elephant.”

Whether or not the buffalo was involved, the Union Progressive Party – a combination of Townsendites, acolytes of radio demagogue Rev. Charles Coughlin, disgruntled Borah supporters and others – did win a spot on the Illinois ballot in 1936. Its presidential candidate, U.S. Rep. William Lemke of North Dakota, received 1,095 votes out of 54,000 cast in Sangamon County that November.

The Lawsonomy headquarters remained on North Fifth Street until at least 1941. The 1942-43 city directory shows that district leader Scott had moved the headquarters and Scott residence to 115 N. Seventh St. Both the Direct Credits Society and the Scotts disappear from city directories in 1944.

Photo note and hat tip: The photo at the top of this entry is one of only two Depression-era photographs from Sangamon County contained in Yale’s Farm Progress Administration photo database. The other is a different view of the same Lawsonomy storefront. This entry apparently is the first time the address of the storefront has been definitively located. Thanks to Curtis Mann of Lincoln Library’s Sangamon Valley collection for his help with that identification.

This entry was posted in Buildings, Depression, Photos and photosets, Politics. Bookmark the permalink.