The first telephone conversation in Springfield took place on Feb. 28, 1878, over a line between the city office of Western Union, Sixth and Monroe streets, and the company’s branch office at the state Capitol.

The conversation, however, then devolved to comments about the weather and a couple of musical selections:  Lawyer and former Western Union official William L. Gross, calling from the Western Union office, sang “Home Sweet Home,” to which George Kelchner at the Statehouse responded by playing an “operatic air on the concertina, every note sounding with distinctness to the city office.” Kelchner was the local Western Union manager. 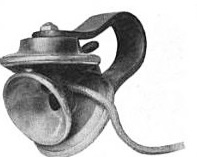 The Illinois State Journal described the rudimentary telephone apparatus, which was based on a design by Elisha Gray (a competitor of Alexander Graham Bell’s) and manufactured by the Western Electric Co.

There are two “hand apparatus,” of rubber and called “tubes,” attached to the case or box at each end – one for the mouth and the other to be placed against the ear, or one may be used for both purposes, so that the other “tube” may be utilized by a second listener or speaker, at either terminal point. Within the “tube,” and to be spoken against, is a sort of “disk,” of thin metal, which vibrates and carries the sound. It is held in front of the mouth and spoken against, and the sound is thus carried along the ordinary telegraph wire to the end of the circuit.

“(I)t was plain that the telephone is a great and remarkable institution and destined to prove of great convenience,” the newspaper concluded.

Western Union, via its subsidiary, the Gold and Stock Telegraph, provided Sangamon County’s initial service in 1878. The first active line was between the Statehouse and the governor’s mansion.

As telephone use grew in Springfield, Kelchner announced in July 1879 that Western Union would create Springfield’s first telephone exchange. For $4 a month, he promised, a subscriber would receive a free phone instrument and access to other phones on the exchange, including such sites as the Statehouse and courts.

Western Union set up that exchange in September 1879; the office, above a tavern on the east side of South Fifth Street, served 25 customers.

“This enterprise will prove of great value to business and professional men,” the Illinois State Journal said.

When the exchange was created, the Illinois State Journal listed the first 100 telephone subscribers in the city. Phone number 1 was assigned to  one of those who had been on that first call, William Gross. In addition to a local career as a lawyer, legislator and judge, Gross (1839-1909) as a young man had been a telegrapher and a Western Union agent and manager.

Based on telephone numbers given in newspaper ads, the number of phones in Springfield totaled more than 450 by 1885, and telephone directories were in use by the late 1880s.

Hat tips: To Joe Armstrong and Mitch Hopper of the Sangamon Valley Radio Club, whose dual presentation to the Sangamon County Historical Society in September 2015 was a great help to researching this topic.  And to William Cellini  Jr.,  who  added  information in April  2020.

This entry was posted in Media. Bookmark the permalink.