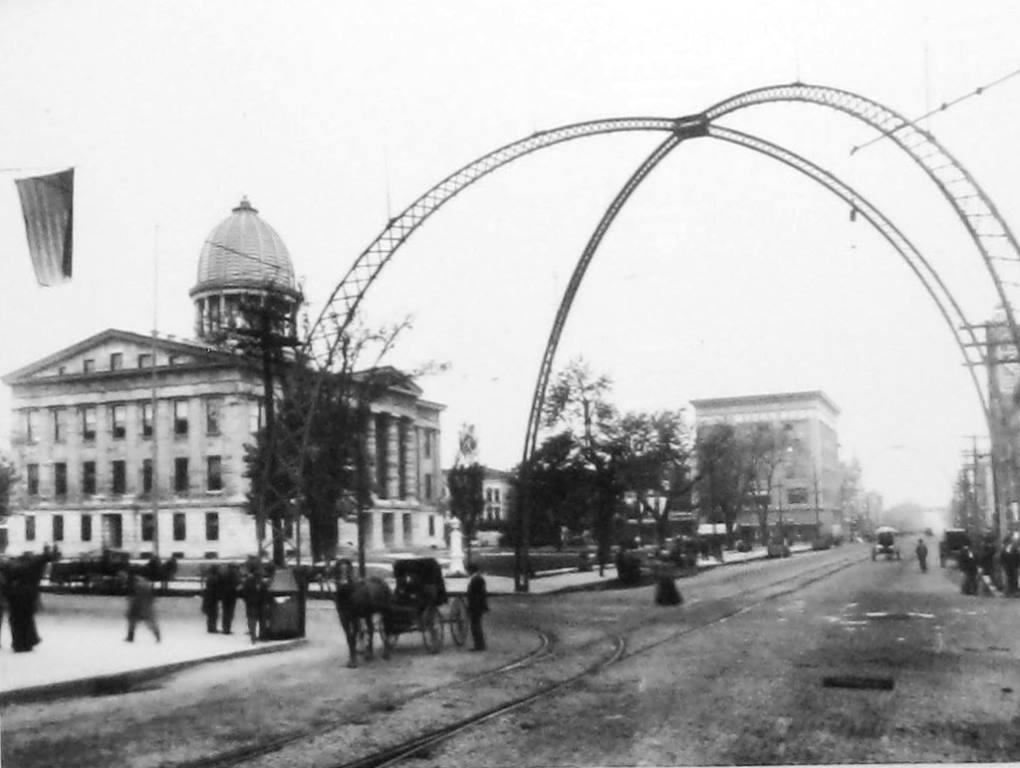 The steel arches that once dominated the four corners of Springfield’s downtown square went from being a graceful addition to an eyesore in barely 20 years.

Actually, Springfield erected two sets of arches on the square in the late 1800s. The first arches were wooden, erected when the city hosted the Sovereign Grand Lodge of the International Order of Odd Fellows in September 1897. The convention – described as “the highest legislative body in Odd Fellowship” – brought thousands of people to Springfield, the smallest community to have hosted the lodge up to that point. 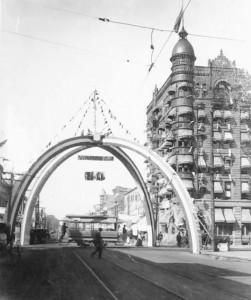 “The Odd Fellows’ building (at Fourth and Monroe streets – ed.) is festooned in the colors of many nations, and produces a most pleasing effect, while four large double arches at the four corners of the public square are arrayed in a style and brilliancy befitting the occasion.”

The wooden arches lasted for a couple of weeks after the Odd Fellows left town in order to also greet Illinois State Fair crowds (the fair was held in the fall then). They then were dismantled. But the success of the wooden versions prompted city fathers to begin talking about a permanent set of arches.

Arches, decorated with flowers and greenery, were a regular aspect of celebrations around the country in the late 19th and early 20th centuries. Later, arches often undergirded spectacular displays of then-new electric lights. 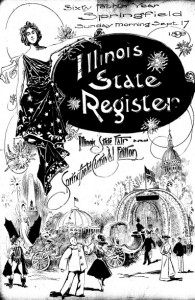 That was the case when Springfield erected its steel arches in 1899. The commercial impetus for construction of the arches was the state fair, which not only was held in the fall (Sept. 25-30 in 1899), but which, at the time, had no carnival or other entertainment. Instead, evening shows –parades, theatrics, music, acrobats and more –were held in downtown Springfield. Entertainment in 1899 also included a Mardi Gras-style parade – a three-hour-long “Panoramic Street Pageant” — from South Grand Avenue to downtown and back, designed by the same man who organized St. Louis’ Veiled Prophet celebration.

The events were financed by the Springfield Carnival Association, an organization of local businesses headed by Mayor Loren Wheeler. The association spent about $3,000 to have the four steel arches manufactured by the Massillon (Ohio) Bridge and Iron Co. (The arches did not come from the 1893 Columbian Exposition in Chicago, as folklore has it. See below for more on the confusion.) Local workers erected the arches in August.

The novelty of incandescent lighting provided much of the impetus for officials’ decision to build the arches. The Illinois State Journal waxed eloquent about the results in its Sept. 27 edition.

The Carnival association promised repeatedly … that the light decorations in their entirety would be the most magnificent ever seen in a city the size of the capital of Illinois.

There will be no controversy over the statement that the four double steel arches on the court house square, edged in white incandescents and glorified with clusters of colored lights, were the logical center pieces of the whole scheme of illumination. The people of Springfield are proud of those arches. They submit it to the sober judgment of their thousands of guests that no lovelier luminary was ever wrought out with the instrument of electricity. The white lights furnish the brilliancy of sheen and the vari-colored globes add a touch of life just strong enough to appeal to the healthy artistic sense.

To one standing at Capitol avenue and Sixth street and looking north, the picture was an inspiring one. On either side of the street, stretching away for half a dozen (blocks), was a line of gleaming light like ropes of fire in the night. The great arches blazed out in graceful semi-circles thirty feet high.

At first, the arches were illuminated every Saturday night. For most of the next two decades, however, lighting was restricted to during state fair week and for major conventions and other special events.

In between times, though, complaints about the arches began to mount. As early as 1910, one alderman suggested – in order to gauge public opinion, he said – that the arches be removed. That led to this backhanded defense of the arches from the Journal:

It is true that the arches are not artistic creations, that they loom unpleasantly except when decorated with lights, and that they offend some persons whose delicate sense of the beautiful cannot become reconciled to big steel bows and cross-bars. But they do the business for which they were erected, and when it becomes necessary to illuminate Springfield for a festal occasion they are indispensible (sic).

Finally, in 1920, the Springfield Chamber of Commerce made demolition of the arches a priority. The Chamber was leading a city beautification drive and a new street lighting system was in planning stages, so Chamber secretary William Conkling told aldermen the arches had served their purpose. The chamber’s position was that the arches “could not be defended either on the ground of utility or beauty,” a Register story said.

Rabbi Edward Israel of Temple B’rith Sholom told his congregation in January 1920 that the arches’ continuing presence was a symbol of Springfield’s reluctance to embrace the future.

“The retention of those countrified arches of lights upon our main square of Springfield, relics of bygone ages of provincial tawdriness, blemishing the city because of a woeful conservatism which says that nothing can be moved – this is only a trite example of the dead hand of the past upon the throat of many a city like ours, ready to grow to something bigger and finer,” he said.

City officials voted in February to sell the arches for $300 to local foundry owner Frank McGowan. (The proceeds were donated to American Legion Post 32.)

A series of delays ensued, however. The Chamber of Commerce finally lost patience the next spring and organized a fundraising drive to pay for the arches’ demolition. As crowds of people watched, workmen took acetylene torches to the arches in June 1921; all four arches were removed in two days.

McGowan, the Register said, planned to use the steel in construction of a garage. 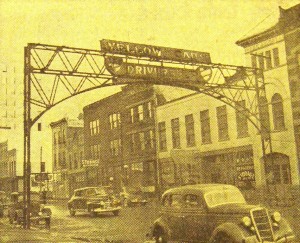 The former Chicago & Alton railroad arch, Third and Jefferson streets, just prior to removal in 1942 (SVC)

Though by far the most prominent, the arches on the square were not the only ones Springfield boasted in the early 20th century. Arches also were erected at the city’s three railroad passenger terminals — the Chicago & Alton (today’s Amtrak station), Union Station (now the Abraham Lincoln Presidential Library and Museum visitor center) and the Wabash station (now the Lincoln Depot).  The depots, of course, were the entry points for most travelers to the city at the time.

Unlike the double-span arches around the square, the railroad arches all were single arches. The last, the original Chicago & Alton arch, was taken down in 1942. In its last years, it served as an advertisement for the Yellow Cab Co. 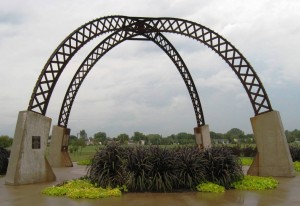 The arches on the square are remembered today by a small double arch, the Selvaggio Historic Arches, erected at Edwin Watts Southwind Park. That arch also features a night-time light show.

However, the plaque explaining the Selvaggio Historic Arches perpetuates the myth that the original arches came from the Chicago Columbian Exposition in 1893.

Newspaper records from 1899 are clear that Springfield’s downtown arches were constructed in Ohio specifically for Springfield. There is no contemporaneous mention of the Chicago event in connection with the arches’ erection, although some newspaper stories in later years do tie the local arches to the Columbian exposition. It’s not clear why.

The most likely explanation for the confusion appears to be the fact that Springfield’s downtown state fair carnival in 1899 was called the “Columbian Carnival.”

The name had nothing to do with the Chicago fair, though. It was chosen by the carnival promoters solely because the first float in the carnival’s giant parade was titled “Columbia.” The float featured the figure of Columbia, a warrior princess who at the time was a popular symbol of America, along with such patriotic symbols as eagles, flags and banners.

As a symbol, Columbia since has lost out to Uncle Sam and Lady Liberty, as the Pittsburgh Post-Gazette pointed out in 2008.

This entry was posted in Architecture, Business, Celebrations, Local government. Bookmark the permalink.