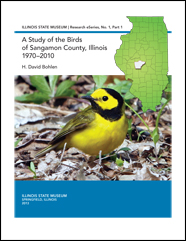 However, Bohlen warns in his report, published online by the museum in 2013, that increasing human population has badly reduced avian diversity over the past 200 years and threatens to do more damage in the future.

Soon after European settlement, nearly all of the natural habitats in Sangamon County were modified or destroyed over a relatively short time. The prairie was ploughed; the sloughs, marshes and ponds were drained; and the woodland was cut down. The only birds present now (or those that were introduced, reintroduced or recently invaded) were those that survived that first onslaught by European and other peoples. Unfortunately, this process continues to accelerate today. …

The first bird species to be lost in the county were the Carolina Parakeet and Passenger Pigeon. The only mention of the Carolina Parakeet in the county was from Shireff (1835) who visited Springfield in 1833 and while along the Sangamon River, saw “The forests abounded with green coloured paroquets, which fluttered about with disagreeable noise, in flocks of six or seven.”

Some other birds probably were in the county prior to European immigration, although there is no solid documentation today of their presence, Bohlen wrote, among them the Eskimo curlew, long-billed curlew, whooping crane, trumpeter swan, swallow-tailed kit and common raven.  Some species, such as turkey and trumpeter swans, have been reintroduced, he notes, “but I wonder if they are genetically the ‘same birds’ as the originals.”

“The destruction of the natural environment in Sangamon County continues and consequently there there are very few wild places remaining …,” Bohlen added.

It has taken several years to write this report, and if I have learned anything it is that … in two words: “things change.” And this change was not always for the better. …

Because humans have pushed the remaining wildlife into a few corners in Sangamon County, these areas should be considered as precious and held in high esteem. They contain the remnants of our remaining forests and prairies. Activities incompatible with maintaining biodiversity should be limited.

Our few natural areas are the only places left where other species, such as the birds described in this study, can try to survive in this rapidly changing world.

The full title of Bohlen’s work is A Study of the Birds of Sangamon County, Illinois, 1970-2010. The bulk of the study documents his observations of every bird species he encountered over those 40 years.

Bohlen’s work is available as one of the volumes in the state museum’s “e-series” of online publications. Part 1, 771 pages, is the text of the study; Part 2, 51 pages, displays Bohlen’s photographs of many of the birds he saw.

This entry was posted in Prehistory, Resources, Science. Bookmark the permalink.