Founded and named: The village of Cantrall was originally named Antioch, but the name was changed to honor the Cantrall family, who were among the first European settlers of the area. In unusually precise fashion, the Historical Encyclopedia of Illinois, Vol. 2, reports that Levi Cantrall began building a cabin in or near what is now the village of Cantrall on Dec. 8, 1819. Levi Cantrall set up a horse-powered grist mill the next fall and then established a tannery that he operated for another 40 years. Cantrall was platted in 1872 by eight men, including Joseph Cantrall. 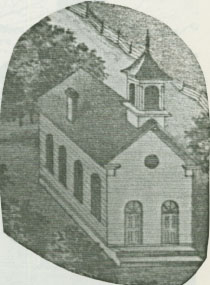 More: The Cantrall/Antioch Christian Church lays claim to being the first church in Sangamon County; it was organized on May 15, 1820 by Stephen England. A church history at the Sangamon Valley Collection at Lincoln Library also identifies the first marriage in the county – at Antioch Christian Church – as that of Lucy England Scott to John Cline, an employee of Levi Cantrall. The Historical Encyclopedia identifies the date as July 20, 1820. The first church building was constructed of logs in 1823.

A tornado struck the Cantrall area on May 9, 1995, destroying three homes and damaging 10. Cantrall Elementary School, part of the Athens School District also was extensively damaged. Total path length of the tornado was 40 miles. Damage estimates in Sangamon County were $1 million. A striking video of the tornado is here.

This entry was posted in Churches, Disasters, Early residents and tagged Tornadoes. Bookmark the permalink.