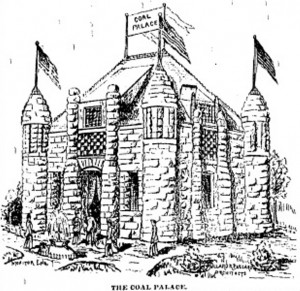 Sangamon County showed off its most valuable mineral by building a “grand coal palace” for the 1889 county fair.

The idea for the palace apparently originated with an unidentified Illinois State Journal staff member only two weeks before the scheduled opening of the fair on Sept. 10, 1889. The suggestion was quickly taken up by fair association secretary Col. Charles Mills and local coal mine operators.

They enlisted the prominent Springfield architectural firm of Bullard & Bullard to design what turned out to be a castle-like structure, 26 feet long and 16 feet wide, with towers at each corner. The tip of the flagpole was 35 feet above ground. (The drawing above appeared in the Sept. 3 editions of both the Journal and its rival, the Illinois State Register.)

Both newspapers seized on construction of the palace to display their civic boosterism. The Journal rhapsodized about the area’s coal industry on Aug. 31:

In addition to the advantages possessed by the city of Springfield as a desirable place of residence, owing to its location in the centre of the richest agricultural section of the world, its abundant supply of pure water, its excellent railroad facilities, its educational advantages, its beautiful churches and its healthy climate, the fact must not be overlooked that it is also in the midst of one of the richest and best veins of bituminous coal to be found in the whole country, furnishing cheap fuel for its citizens and affording facilities for manufacturing unexcelled by any other city in the State. This coal, which is about 5 feet 10 inches in thickness of vein, underlies the city of Springfield and the county of Sangamon and is found at a depth of 225 to 250 feet from the surface. Twenty mines are now in operation in this county, giving employment to about 1,500 men, and producing coal to the amount of one million of tons per annum at an average selling price of about 95 cents per ton at the shaft. This output will only be exceeded by two counties in the State. This coal finds a market mostly in the Northwest, Wisconsin, Iowa, Minnesota and Dakota, and is gaining in popularity wherever it is introduced.

The Register, meanwhile, turned its display of the drawing on Sept. 3 into basically a commercial for the Wilmington & Springfield Coal Co., which drew coal out of its mines “in solid big blocks of pure carbon” by using a machine that did not require the coal to be blasted apart before being brought to the surface.

“Put down in your memorandum book that the coal palace was built of coal from the Wilmington & Springfield mines, and this coal is that which comes in good solid chunks with no slate, slack nor waste,” the paper said.

The blocks of coal that made up the palace were laid in black mortar, and the roof was covered with tar and “nut coal.” The structure, which cost about $1,000 to build (a cost borne by mine operators) was next to the fairgrounds’ main entrance. (A few years later, the county fairgrounds were donated to the state and became the permanent site of the Illinois State Fair. The main entrance in 1889 is today’s Gate 2, at Peoria Road and Sangamon Avenue.)

Original plans were for the fair to double up on Sangamon County’s most valuable natural resources by displaying the fair’s corn exhibits inside the coal palace. If that came to pass, it wasn’t reported in contemporary news accounts. One problem may have been that a spate of bad weather delayed the palace’s grand opening until Sept. 12, the third day of the fair’s four-day run.

Even if it was a day late, the grand opening nonetheless went off with full ceremony. Speakers included U.S. Sen. Shelby Cullom, representatives of coal companies, union miners and the Illinois Bureau of Labor Statistics, and two bands. (Musical selections included “Down in a Coal Mine, Underneath the Ground.”)

The palace was dismantled following the fair and the hundreds of tons of coal were given to the fair’s managers “to be donated to some of the charitable institutions of the city.”