On May 18, 1861, President Abraham Lincoln wrote to Treasury Secretary Salmon P. Chase about an “old friend who has served me all my life, and who has never before received or asked anything in return.” The friend, Robert Irwin, was making a request on behalf of a business associate of Irwin’s son-in-law.

There was some hesitation about whether to grant the requested appointment for one George Dennison, but that is another story. In regard to that request, however, Charles W. McLellan, a friend of Lincoln in Springfield, recalled Lincoln commenting that he “‘would cut off his right hand if Robert Irwin asked him to do it.’” 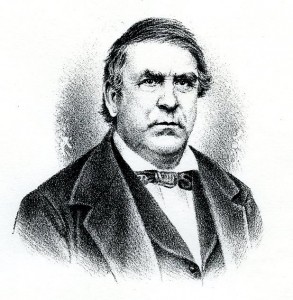 Who was this Robert Irwin? He was born in Pennsylvania, moved to St. Louis, and worked in merchandising before coming to Springfield in 1834. There, he joined with merchant John Williams until Irwin’s brother John arrived.

The two brothers then established their own store. Ledgers from that store can be found at the Abraham Lincoln Presidential Library, where they reveal the purchases made from Irwin’s by Mr. and Mrs. A. Lincoln.

What may have begun as a business acquaintance developed into a strong friendship between Lincoln and Irwin. They were true contemporaries, with only about three months difference in their ages – Irwin born on Nov. 7, 1808, and Lincoln on February 12, 1809. They lived in the same general neighborhood, Lincoln at Eighth and Jackson streets and Irwin at Sixth and Cook streets (the house now known as the Elijah Iles House).

Business investments, legal situations and entertainment settings brought them into the same social circles. For instance, Lincoln often joined a group of men who met at Irwin’s place for games of euchre. William Corneau remembered Lincoln was “not so enthusiastic at the game as were Mr. Irwin, Mr. Ridgely, Mr. Douglas, and Dr. Merryman . . . he was the humor of the evening and the pacificator of the losers.”

Clinton L. Conkling described Irwin as a man “full of humor and good will” and said he was a good singer, too. These character traits may have appealed to Lincoln.

Irwin also was deemed trustworthy. According to Irwin’s ledgers, Abraham Lincoln deposited $175 in 1843 with Irwin – there were no banks at the time, and Irwin had one of the few safes — and was paid interest. Deposits and withdrawals continued. In 1847, as Lincoln left for Washington D.C., to serve in Congress, he entrusted Irwin with management of his financial obligations, income and investments.

That trust was shown again in 1861, when Lincoln left Springfield for the presidency. By that time, Irwin had become one of the founders of the Springfield Marine and Fire Insurance Co. a business that functioned mainly as a bank. Later the insurance part of the company was dropped and it became known as the Marine Bank.

What may have been the biggest draw between the two men was a mutual love of politics. Both were active Whig/Republicans. As a presidential candidate, Lincoln not only had Irwin’s political support, he also had Irwin’s financial help. Irwin was one of 10 contributors who put up $500 each to back Lincoln’s local campaign. After a large Republican rally put a significant dent in the initial donation, Irwin was one of those who added a second $500.

The last time the two friends were together was on the train that took Lincoln to Washington in February 1861. Irwin and several other friends rode part of the way with Lincoln. Other than Irwin’s patronage request for George Dennison, no other communication is known between the two men while Lincoln was in Washington.

At home, Irwin supported the war effort, using his own funds to provide troops with supplies. He saw Lincoln’s election for a second term, but died without knowing of the war’s end.

Robert Irwin died on March 8, 1865, about a month before his good friend was assassinated. Survivors were his wife, Clara, two daughters and one son. He is buried at Oak Ridge Cemetery.

Harry W. Pratt discussed Lincoln’s presidential campaign seed money in The Personal Finances of Abraham Lincoln (1943).  “It was early recognized … by his friends in Springfield that there would be expenses incidental to the campaign which Lincoln should not be expected to meet,” Pratt wrote. Only eight of the 10 supporters have been identified: Robert Irwin, Stephen T. Logan, who organized the effort, Jacob and John W. Bunn, William Butler, John Williams, Ozias M. Hatch, and Thomas Condell. A ninth probably was Jesse K. Dubois, Pratt adds.

Lincoln’s regard for Irwin was outlined in a 1918 letter from Hugh McLellan, Charles McLellan’s son, to Lincoln biographer Jesse Weik. See The Real Lincoln: A Portrait (1922) with letters added to a new edition by Michael Burlingame, (2003), p. 368.

Lincoln’s companions during his train trip from Springfield to Washington, D.C., for his inauguration are discussed in Lincoln’s Journey to Greatness by Victor Searcher (1960).