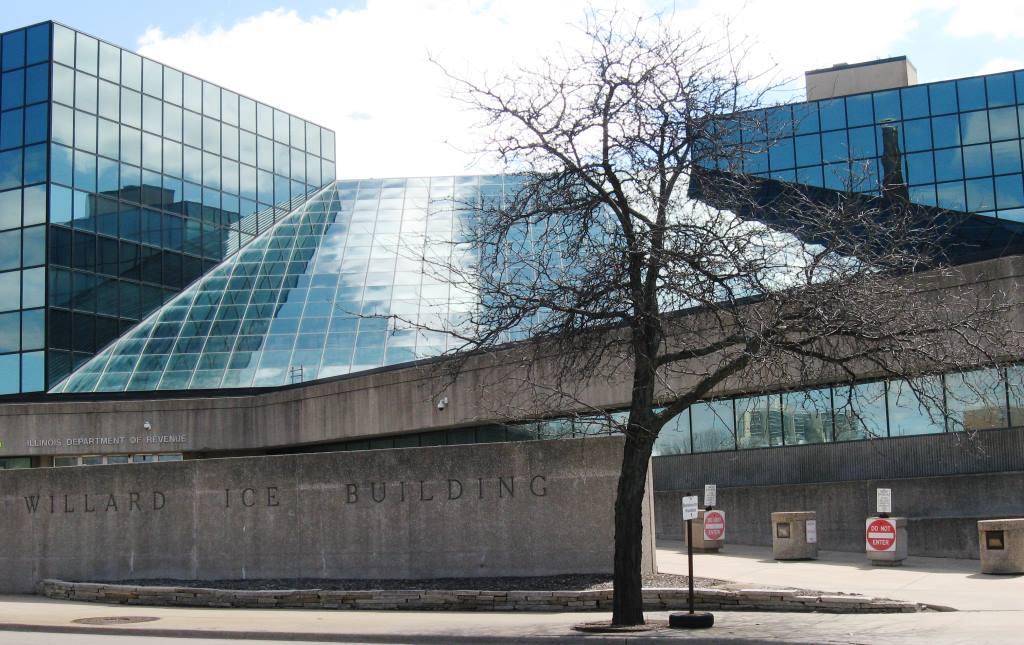 Willard Ice (1915-80) was an attorney and public servant at the Illinois Department of Revenue for more than 30 years, including a brief period as revenue director.  The Revenue Department’s headquarters in Springfield is named after Ice, commemorating his contributions to state government and his extraordinary accomplishments in life, despite numerous personal challenges. 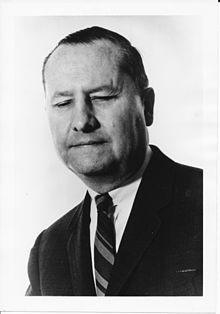 Ice was born in Danville, the third of five children of Homer Ice, a coal miner, and Catherine Ice, née Stephens. At four years old, while cutting the string of a package, Ice slipped and cut himself in the right eye. The subsequent infection migrated into his left eye. After several weeks of illness, the infection blinded him for life.

At the age of five, Ice was taken to the state school for the blind (now the Illinois School for the Visually Impaired) in Jacksonville, where he lived for most of his childhood. There he learned to read and write Braille. He also learned how to calculate arithmetic by memory.

In 1933, Ice started his higher education at Illinois College, also in Jacksonville. He was given room and board and two jobs. One was in the laundry room at the school for the blind; the other was as an assistant librarian in the Braille library. He carried a double major in history and economics, with a minor in political science. After three years, Ice had a grade-point average of 4.98 on a scale of 5.0. At that point, he enrolled in an expedited scholastic program that allowed him to begin study at the University Of Illinois School of Law.

During the summers before Ice began at the University of Illinois, he played piano in a dance band in Danville with a close friend from the school for the blind. Ice was a talented pianist and song writer. By the time of his death, he had written more than 20 copyrighted songs. 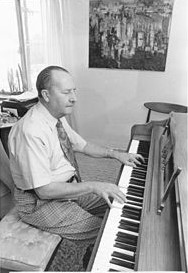 At the piano (UIS Archives)

Ice excelled at his law school coursework as well; he was an editor of the Illinois Bar Journal and president of the Junior Bar Association. He graduated with the highest GPA in his class.

Ice met Ina Rae Grimes at the U of I. They graduated together in June 1939 and were married the following August.

In a 1977 interview done for the oral history program at the former Sangamon State University, Ice explained to interviewer Cullom Davis how he navigated city streets on foot. Ice said he never used a cane or a guide dog, but rather listened to changes in sound around him to know where he was. He described the experience and discussed walking to Ina Rae’s house:

“Something looms up in front of you or beside you or wherever it is. Just a feeling as though something is there that cuts off the air. It’s like what you probably experience when you get into a car and you’ve gone past a line of cars or you go by a wall or something. It makes a different sound. It cuts off the open air reception. I’m sure you’ve heard that yourself. Of course, you pay more attention to it if you have to. You depend on it.

Now, you can’t hear step downs, you have to learn where they are. You can hear a step up curb if there isn’t too much conflicting noise, traffic and wind and things like that. Since the curb step up is so low you’re not going to get a good echo like that as you would from a tree or a wall or a telephone post or something like that.

They thought it was humorous when Ina Rae and I were dating. I lived in Champaign and she lived in Urbana and I had to go down to Daniels, cut straight through the campus, walk straight through, and get over a couple blocks where she lived. She didn’t live on the corner and they’d ask me, well how did I know when to turn in, how did I know where her house was. I always answered, ‘Well, she lives the fourth tree from the corner,’ and that was true. Between the walk and the curb I’d listen for four trees that I had to pass, from these echoes I’m talking about, and when I passed the fourth one I knew it was time to turn in.”

After a brief period as a private practice lawyer in Danville, Ice took a position in the research division at the Illinois Department of Finance (which later became the Department of Revenue).

His work mainly entailed corresponding with taxpayers and resolving issues when possible. In July of 1949, after his boss in the Rules and Regulations division was discovered to have been taking credit for Ice’s work, the finance director (Richard J. Daley, later mayor of Chicago), fired Ice’s boss and promoted Ice to head the Rules and Regulations department. Ice then reported directly to the Director of Revenue.

Ice worked at Finance/Revenue from January 1942 until his retirement in 1977, serving under seven different governors and 14 department directors. He reluctantly spent 10 weeks as interim revenue director under Gov. Dan Walker in 1973.

During his 35-year tenure, Ice prompted the passing of numerous tax laws and regulations, including Illinois’ general sales tax, the cigarette sales tax, the World War II Veteran State Bonus, and the Horse Racing Act. His career earned him the nickname “Mr. Revenue.”

Willard and Ina Rae Ice were driving through the railroad crossing at Third and Jackson streets in Springfield on June 25, 1980, when their car was hit by an Amtrak passenger train. Ina Rae was killed instantly, and Willard died an hour later at St. John’s Hospital. They were survived by two sons, Willard Jr. and Allen.

In 1981, the General Assembly named Illinois’ new Revenue Department headquarters the Willard Ice Building (commonly referred to as “the WIB”). Construction of the six-story, open-atrium structure, which sits between Jefferson and Madison streets west of downtown Springfield, began in 1980 and was completed in 1984. Total construction cost was $69 million.

Sources: In addition to the oral history interview, Ice’s career was covered in a Jan. 9, 1977, State Journal-Register profile written by Andy Lindstrom. The deaths of Willard and Ina Rae Ice were the subject of articles in the June 26 and 27, 1980, editions of the SJR.  Special thanks to Thomas Wood, University Archivist, Brookens Library, University of Illinois Springfield.