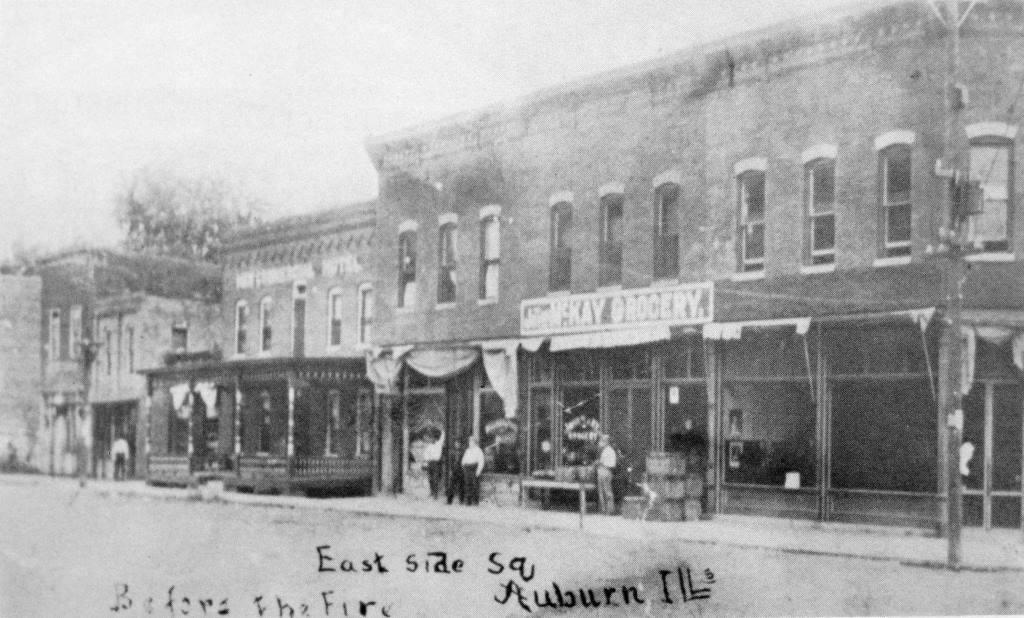 East side f the Auburn square some time before the fire of March 16, 1910. (History of Auburn, Auburn Historical Society)

A fire that destroyed the entire east side of the Auburn town square early on March 16, 1910, was described in the March 18 edition of the Auburn Citizen. Here is the Citizen’s story.

At about three o’clock Wednesday morning, the sleeping inhabitants of Auburn were awakened by the clanging of the fire bell, firing of revolvers and various other alarms, signifying that a fire of unusual magnitude was in progress. Soon after the first alarm was sounded most of the city was illuminated by the burning buildings on the east side of the square. Starting in the rear of the Nackros grocery store, the fire spread rapidly to the surrounding buildings and soon the whole east side was a mass of flames.

It was soon apparent that our equipment for fighting fires was inadequate even for the protection of the surrounding buildings and help was summoned from Virden and Springfield. But long before help arrived, the fire was beyond any possibility of being controlled. Everything along the east side was consumed except the two story brick building on the northeast corner, owned by Reisch Bros. Brewing Co., which was of solid brick walls with no windows, and soon nothing was left but fragments of the tottering walls. All other buildings in the path of the flames were wooden and veneered structures and offered little or no opposition to the progress of the fire.

This is one of the most disastrous fires in the history of Auburn. No definite reason can be assigned for the origin of the fire.

It will require only two or three such fires as this to fully pay for a good system of waterworks that would be of inestimable value to our city, would increase the value of its property, invite to our city various industries and furnish adequate protection against fires.

From the files of the Auburn Public Library.

This entry was posted in Communities, Disasters. Bookmark the permalink.