The Victory Loan Flying Circus, a barnstorming group of World War I pilots using WWI combat aircraft, put on a show for thousands of central Illinoisans in front of the Illinois State Fairgrounds Grandstand on April 15, 1919. 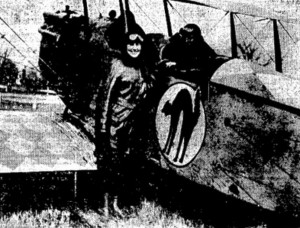 Nellie Browne Duff poses next to the plane in which she took her first flight. (Courtesy SJR)

An unbilled attraction of the show was the fact that the indomitable Nellie Browne Duff, Illinois State Journal feature writer and advocate for Great War veterans, became the first woman aboard a flying circus plane. Duff said she was chosen because she was state publicity chairman for the Women’s Liberty Loan Committee; the circus had gone on tour to encourage purchase of Liberty Bonds to pay off costs of the recently concluded war.

It also was Duff’s first plane ride. She found the 20-minute experience, which she described in the Journal the next day, to be thrilling.

I never really knew how pretty Springfield was until I saw it from the plane. It lay beneath me in squares, some all green, and I can remember distinctly noting one tree by itself in a sort of pasture, with a perfectly beautiful shadow lying on the ground. The sun was shining all the time we were up.

The streets and roads looked so regular, and along them crawled ants, which I knew to be automobiles. I looked for the state house and found it. And I twisted around in the seat and found other places as we flew.

Then things began to happen….

The descent really seemed swift. And sure.

We struck the earth, bouncing along, really very lightly when on the inside, I found, and skimmed over the track. …

Then we stopped. Captain Powell came to help me out, and once more I stood on terra firma. Some one asked me how I felt. Really I felt like going right back up again.

For I never enjoyed anything quite so much in my life.

The rival Illinois State Register, none of whose reporters got a similar ride-along, was waspish about Duff’s sojourn in the air.

After the flyers had completed their program Miss Nellie Brown (sic) Duff appeared on the grounds and stated that as chairman of the – well it was some awe inspiring title in connection with the Liberty Loan – she was entitled to a ride. Miss Duff … was given a ten minute flight and after she had alighted attempted to pacify the jealous newspaper men by declaring that she was given the flight only as a member of the Liberty Loan committee. And also advised the pencil pushers, as they merely gnashed their teeth in response – “If this was an aviation meet participated in by women only we certainly would have invited one of you boys instead.”

Air flight, of course, was dangerous at the time, sometimes even to spectators. The flying circus’ two German Fokker aircraft were out of commission for the Springfield visit as the result of an accident in St. Louis the day before that resulted in the death of a young boy.

That doesn’t seem to have had an effect on local attendance — estimates of the number of people who saw the Grandstand show were as high as 50,000. Public schools closed for the day so students could take in the exhibition, and many businesses gave their employees time off as well.

In addition to the excursion rides for Duff and two male Liberty Loan officials (local chairman James Easley and vice chairman Latham Souther), the international group of planes and pilots performed simulated air combat and stunt flying. In the process, they “bombed” Springfield with leaflets declaring “Liberty bonds kept these from being German bombs. Victory Liberty Notes pay for peace.”

Nellie Browne Duff got a couple more flight opportunities that spring and summer, leading her to take flying lessons and, a year later, buy her own Curtiss aircraft. By 1921, she was proficient enough that, at that year’s fair, she was scheduled to fly past the Grandstand again on her own, in the process releasing a flight of homing pigeons bearing messages for state officials.

Whether that ever happened, however, is a mystery. If it did, there was no newspaper coverage, and, in fact, no evidence has turned up to show that Duff continued flying at all.

Related note: Maj. George Stratemeyer (1890-1969), who commanded the flying circus in Springfield, rose to the rank of lieutenant general in the U.S. Air Force in World War II. He went on to command the air component of U.S. forces in Korea in the first year of that war.

Hat tip: Thanks to Alan Roesler of the League of World War I Aviation Historians for bringing this event to our attention.