Before he was Abraham Lincoln’s foil in the 1858 contest for U.S. Senate in Illinois and then for the presidency in 1860, Stephen A. Douglas was a regular presence and sometime resident in Springfield. Douglas also was, briefly, Lincoln’s rival for the attentions of the winsome Mary Todd, and he was inducted into the Masons by Springfield Lodge No. 4 in 1839.

Douglas is memorialized in Springfield by the naming of an avenue, a public school and a park. But the most prominent local remembrance completed in his lifetime is a life-size (5 feet, 4 inches tall) statue of Douglas that stands just outside the House of Representatives chamber in the Old Capitol State Historic Site.

Former Gov. Joel Matteson, a Democrat and ally of Douglas, commissioned Leonard Volk to sculpt the statue in 1858, shortly after Matteson’s gubernatorial term ended. That also was the year Douglas won the Senate contest over Lincoln, following their famous series of debates that vaulted Lincoln into national prominence.

Volk – who, incidentally, was a cousin of Douglas’ wife and whose studies in Rome Douglas had helped pay for – delivered the statue, crafted of Vermont marble, in July 1859. It was put on display at Isaac Curran’s pharmacy on the Springfield square.

Historian James T. Hickey, discussing the statue in 1976, quoted the Illinois State Journal as calling the statue “a very fine work of art … excellent and truthful in the delineation of the features and expression of Senator Douglas….”

However, another Journal note – the Journal, of course, was the Republican paper – was more biting. By the time the statue was delivered, Matteson was embroiled in the “canal scrip” scandal, in which he was accused of recycling state IOUs that had already been paid off.

MATTESON’S STATUE OF DOUGLAS – We have heard a great variety of remark and criticism upon the Matteson statue of Douglas, now on exhibition at Curran’s. We have even been informed that the stone of which it is made had the happiness to be formed and found very near where the great and good man was himself born; even that, like him, it has very small bright specks in it. We think of no point of information still lacking, except as to the amount of canal checks there is in it.

The statue became a campaign prop when Douglas ran for president the next year, as Matteson took it with him on an electoral swing through the South. Finally, the statue was returned to the Matteson home in Springfield, where a special niche had been prepared in the front hall.

In the aftermath of the scrip scandal, although he was never formally charged with a crime, Matteson was forced to sell the mansion to the state. Matteson’s son-in-law, R.E. Goodell, however, paid off all of Matteson’s debts in December 1863, and it was the Goodell family that owned the house when it was destroyed by fire on Jan. 28, 1873. One of the few items that survived was the Douglas statue. 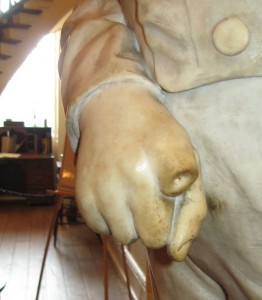 “As the statue was being carried from the burning home, a finger on the right hand and a portion of the scroll held in the left hand were damaged,” Hickey wrote.

The Illinois House debated buying the statue for the state. That apparently never took place, but Volk’s creation eventually did come into state possession – Hickey theorized that it might have been a gift – and a photograph shows it on display in the Illinois State Historical Library, then in the Capitol, in 1913.

The statue followed the library to the Centennial Building (now the Howlett Building) after it was completed in 1923 and then went to the Old Capitol, which was reconstructed in the 1960s. (Douglas worked in the building as a legislator, Illinois secretary of state and state supreme court justice.)

In addition to the broken finger and damaged scroll, what appears to be ingrained soot from the mansion fire remains visible on the statue today.

More information: James T. Hickey (1922-96), who was curator of the Lincoln Collection for the former Illinois State Historical Library (now the Abraham Lincoln Presidential Library), wrote about the statue while presenting the edited reminiscences of Clara Matteson Doolittle, daughter of Joel Matteson, for the Journal of the Illinois State Historical Society. The article, a major source for this entry, was published in the February 1976 Journal and also appears in The Collected Writings of James T. Hickey (1990).