1857: First public high school opens in Springfield in rented quarters on Market Street (now Capitol Avenue) near Spring Street. The school would move twice more before the city of Springfield – which then operated the public schools – constructed its own high school building. 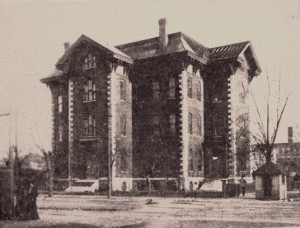 Springfield HIgh School as it appeared at Fourth and Madison streets from 1865 to 1897. (Sangamon Valley Collection)

Oct. 4, 1897: Central High School opens. The new building, constructed at a cost of $75,000, took up the entire block between College, Pasfield, Adams and Washington streets. It could hold 800 students.

Oct. 4, 1917: Springfield High School opens at 101 S. Lewis St. (the site formerly was Forest Park and, before that, the Hutchinson Cemetery). With a construction cost of $500,000, the new school had capacity for 1,500 students. The former Central High became a junior high school.

Sept. 3, 1929: Feitshans High School opens in a building at 1101 S. 15th St. that formerly had been an elementary school. The elementary school, named after teacher and school administrator Frederick Feitshans, originally opened in 1886. However, the original building was destroyed by fire in 1920 and replaced by a new one in 1921.

Jan. 25, 1937: Converse High School students begin classes in the brand-new Lanphier High School, 1300 N. 11th St. The school, built on the site of the former Reservoir Park, is named after Robert C. Lanphier, co-founder of Sangamo Electric Co., then located across 11th Street from the school. (Converse remained a public elementary school through the 1938-39 year, then was sold to the Springfield Catholic Diocese and became Cathedral Boys High School. Cathedral closed with the opening of Griffin High School – now Sacred Heart-Griffin – in 1959; the Converse building was demolished in 1980.)

Sept. 6, 1967: Southeast High School opens at 2350 E. Ash St., replacing Feitshans. Cost of the new school was $3.2 million. A total of 1,295 students were registered at Southeast on opening day. (The Feitshans building reverted to its original use as an elementary school.)

This entry was posted in Buildings, Education, Schools and school districts. Bookmark the permalink.