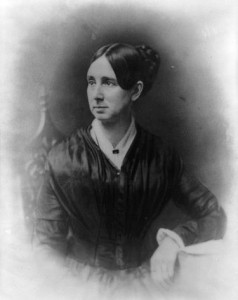 Social reformer Dorothea Dix wrote the following letter – Dix characterized similar communications as “memorials” — to the Sangamo Journal and Illinois State Register on Feb. 19, 1847. It was published in the March 4, 1847 edition of the Journal.

(Words in parentheses are imputed where possible from the letter’s context – the letter was published in the far right column of that day’s paper, but the right edge of the page is tattered, and some words are missing or obscured. Punctuation and emphasis are reproduced from the original.)

Sangamon county Jail, at Springfield, is a building constructed externally of brick, lined with timber. It embraces apartments (for) the keeper’s family upon the first floor, and for the prison department on the second. This (??) is occupied as necessity requires, not only (by) felons and other criminals, but in default (of a) State hospital at present, for the safekeeping (of) the insane, as severe cases from time to time occur. But the most extraordinary purpose to which this prison is appropriated, by the County Commissioners, in addition to the above named use is a poor-house! To be poverty-stricken, friendless, sick, and suffering, then, in Sangamon county, leads the hapless victim of misfortune not a decent, homely yet comfortable asylum, reputable and well ordered, but – to the county jail, daily to associate with criminals and to (be?) even more than they, an outcast from the sympathies and recollection of the community.

The citizens of Sangamon have the not very honorable distinction of rendering sustenance (to) the poor in a common prison; and the (former) board of County Commissioners stand conspicuous for having devised a new mode of economizing the application of the county funds. (While) these arrangements call forth severe censure, and are as unchristian as they are discreditable to the heart and understanding of all official (persons) controlling county affairs, the same sense of justice which demands an exposition of these facts requires that I should add the expression of belief that the inhabitants at large are very little, if at all, informed on this subject. It is true that they ought to be so; for it is clear that every tax-paying citizen should be well informed upon all county affairs, and especially so on all such as affect the moral and physical condition of their fellow-citizens.

Social, moral and religious obligations demand this: duty to one’s self, and duty to one’s neighbor, alike, require fidelity (to) the conduct of all public business, whether reaching the charities of life, or embracing merely its civil provisions.

I have said that the association of the criminal and charitable institutions of Sangamon (county) had been adopted through motives of (economy). I add to this statement my opinion, that the citizens, generally, are humane and liberal, (??) of those who reside at the county seat have, in my own knowledge, manifested a spirit of benevolence and are often active in the practical exercise of this disposition. But I cannot consider the inhabitants blameless in regard to the class commonly called paupers; but which should rather be designated as the necessitous poor. They are passive transgressors of some of the most appealing obligations growing out of the dependencies of social life; and for the governance (of) which we find explicit laws and commands in the books both of the Old and New Testament. But I will not dwell longer upon a theme so unwelcome, to wit, the great neglect of a proper ministration to the physical necessities of the poor, and the total neglect of all moral, religious and reformatory influences both in the jail and the poor-house departments.

I learn from official sources that, previously to the adoption of the present usage of sending the poor to jail, it had been the custom, on the first of March, annually, to sell the paupers distributively, for the term of one year, to the lowest bidder. That this system did not prove satisfactory and was rejected – not (on) principles of humanity but from motives of economy has been shown. From having been called to “pay out of the public treasury often in former times about ($1,000) per annum,” it is stated that for the three consecutive years, 1844, ’45, and ’46, the disbursements for the poor have averaged but about (??). The payments in 1846, according to the (??) report, were however, $636.37½.

The practice of a just economy is, in my view, I desire to be understood, not only expedient but of absolute obligation, upon those who are entrusted with the application of public funds. (It?) is not of a narrow economy, only, that I complain, but of the method by which this object has been accomplished. According to experience in all counties, in all our states, in which well regulated poor-houses have been established, it is thought that this end is most certainly attained through these institutions, and especially if a productive firm is connected with the same. I recollect several counties in Illinois which illustrate (this) position, but I will here quote but one example and (excepting a disadvantageous change of superintendent since my visit) it is most worthy of imitation. I refer to the poor-house and farm of Pike county, at Pittsfield. The Jail in Sangamon county was made the home for the poor in 1844, or early in the following year. It is said that many individuals who formerly claimed support, are now, through aversion to sending them to prison, sustained by their kindred, whereby the county is relieved of an unreasonable burthen.

At present there are three dependent individuals, all aged men, in charge of the (jailer) whose board, severally, he receives $1.75 a week including fuel. They have sufficient (food?) and their lodgings, if in any degree clean, may be called comfortable. Beside the debtors’ prison, a small shed building in rear of the jail is occupied as a bedroom.

I proceed to a special description of the jail. Externally this building presents an uncommonly neat and finished appearance. It has two stories, is built of brick, painted white, and the windows, which are all outwardly of a size usual in dwelling houses, are shaded with green blinds. A light wooden fence encloses a yard in rear, of considerable size, which at present is an absolute nuisance, from being used, though not exclusively, as a pen for hogs. Within, the building is inconveniently planned: on the ground floor are two rooms of good size, occupied by the keeper’s family, and divided by a passage which opens a way from the front door to the yard just referred to.

The second story is reached over a flight of stairs, terminating on a passage about fourteen feet by seven, and partially guarded at top by a wooden grating, the door through which is seldom closed by day. On the right are two rooms for storing grain, &c.; the other, and that more immediately in connection with the dungeons, is now a lodging room for the poor! The windows are large, and safely grated, and admit sufficient light and air. Neither of these elements are expensive!

The dungeons, on the right as you enter have but one excellence, (and I admit the value of this) to wit, security. They are lined with timber, and reached through double doors; the outer one of heavy oak plank, studded with iron spikes; the inner, which are smaller, measuring 2 feet by 4, are grated, and wrought of tire iron. The two dungeons, severally, are 11 by 12 feet and 7 (??) feet high. One of them may be warmed by means of a drum and pipe, conducted from a stove in the keeper’s room below. What might originally have been the plan for supplying light and air, I cannot tell; at present, when both doors from the passage are closed, the only means to admitting these is through two apertures in the outer wall, about 9 or 10 inches square, which beside being grated, are covered with sheet iron through which are pierced a few small holes. It is apparent what measure of advantage can be derived from such a method of sustaining the physical necessity of man for light and pure air. If criminals, suspected persons, and madmen, are justly made subject to health-destroying influences, the plan here adopted is excellently suited to procure these final results.

At present, there is no prisoner here under criminal charge; but, for a considerable period one of the dungeons has been occupied by an insane man, who, for most of the time, is in a state of phrenzied excitement, noisy, unmanageable and filthy; and his condition altogether when I have seen him, has been shocking (and?) revolting. His board – the rate for which I was informed had not been fixed – is paid by the city of Springfield. There are in Sangamon county eleven ascertained cases of insanity, beside several individuals whose reasoning faculties are partially impaired.

The prison is neither clean nor well ordered but I am told that the supplies of food are liberal as well as sufficient, and blankets are allowed for bedclothes as needed. The dungeons otherwise are unfurnished.

The writer has repeatedly visited the jail during the past winter, and has recorded the most favorable history truthful statements will permit.

Respectfully communicated to the citizens of the county.

Dorothea Dix (1802-87), a native of Maine, was the mid-19th century’s foremost advocate for reform of jails and creation of mental institutions. At the same time that she examined the Sangamon County Jail, she was lobbying the Illinois General Assembly to create the Illinois State Asylum and Hospital for the Insane, which was established in Jacksonville on March 1, 1847.

In total, Dix is credited with helping found 32 mental hospitals, 15 schools for the feeble-minded, a school for the blind, and numerous training facilities for nurses, as well as inspiring the creation of many more similar facilities.

“There are few cases in history,” one observer has said, “where a social movement of such proportions can be attributed to the work of a single individual.”