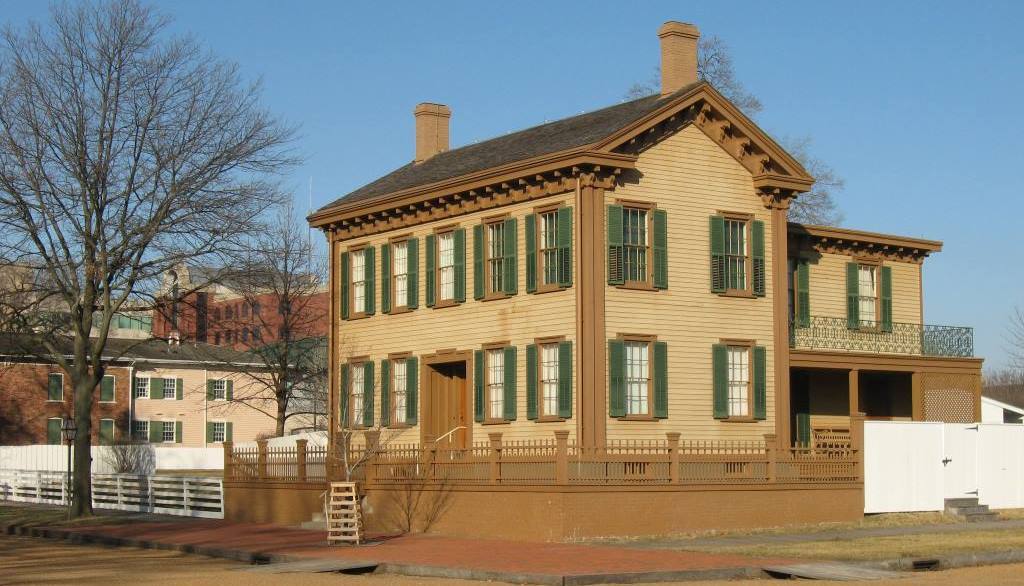 Nelson Howarth, with only a week to go in his third and final term as mayor of Springfield, testified in April 1971 before the U.S. House Subcommittee on National Parks and Recreation in support of designating the Lincoln Home neighborhood as a National Historic Site. Here is a portion of Howarth’s prepared remarks (underlining in the original).

I have escorted through the Lincoln Home Presidents, Prime Ministers, Governors, Ambassadors and other dignitaries and lesser known people from every corner of the USA and around the globe. Most of them approach the site in an almost reverent manner, reciting their own favorite Lincoln story or quotation. We are told by State Department officials that the Lincoln Home is among the top ten sites most often requested as a visit area by foreign guests; and during the summer the children descend upon us – train and car loads of them – indeed, it seems families in America especially the Middle West, make certain that sometime before young adulthood each of their children visit the Lincoln Home to better understand their heritage; and so they come – most of them in the three hot summer months.The problems thus created are enormous – occupying a great portion of the Springfield City Council’s attention since 1963.

That year there were no public toilet facilities within at least two blocks of the Lincoln Home – alone creating 565,341 personal problems that year. There were no directional signs for the benefit of visitors – no information booths or reception centers. Maintenance was inadequate. Parking meters, buses and automobiles blocked the streets bordering the Lincoln Home, destroying its historical atmosphere. Commercialization was spreading. In fact, in 1963 the north half of the Lincoln Home block itself actually was zoned commercial. Our problems in 1963 (and now) were accentuated by the fact that neither the nation, the state, nor the Springfield community had quite made up its mind what to do about the Lincoln Home Areas, or how to do it.

In the meantime, with little or no money, the Springfield City Council has attempted to keep things from completely deteriorating until a permanent decision can be reached; and we pray that H.R. 3117 will be that decision.

Since 1963 the Council has declared the 4-block area surrounding the Lincoln Home a Statutory Historic District as authorized by Illinois law; and successfully it has defended that law (and its grant of eminent domain powers) before our Appellate Courts. It has created a Historic District Sites Commission of interested citizens, and has vested that commission with authority to supervise the Council’s declared policies. It has been most effective. The Council enacted new zoning laws restricting the use of all property in the area to residential and/or office purposes. As an official municipal policy, it adopted the principle that further expansion of commercialization in the area is prohibited; and that as soon as financial means arrive, we will acquire all property in the area being used for commercial purposes under non-conforming rights acquired before our zoning laws became effective, to the end that ultimately commercialization might be near but not in the area.

In addition, the Council has restricted the use of streets surrounding the Lincoln Home to pedestrian traffic; ordered removal of unauthorized outdoor advertising signs and outdoor vending machines; removed parking meters, resurfaced and lighted adjacent alleys, developed plans for the ultimate construction of a pedestrian mall from the Lincoln Home westward on Jackson Street, past the Executive Mansion to our State Capitol complex, and with the help of local private agencies completed a $70,000 area improvement program, which included landscaping, filling and resodding of parkways, laying of 1840-1860 brick and plank sidewalks, installation of improved trash receptacles, special street lighting, and an improved maintenance program.

The State of Illinois maintains the Lincoln Home itself and an adjoining building. It restored this auxiliary building as a Reception Center and installed the much needed toilet facilities.

But just as the City Council began to congratulate itself, serious problems developed suddenly – problems too difficult for a City Council to solve. Expanding numbers of visitors and the modern tourism phenomena brought an increased effort by enterprising citizens to sell something to all these visitors.

Thus far in face of politically powerful opposition (sometimes by successful court decision and other times by a bare majority vote) the Council successfully has resisted further commercial expansion, defeating construction of a multi-storied “log cabin” motel, a hamburger stand, a smorgasbord restaurant, a gun shop, an America first type museum, a wax works museum promising re-enactment of assassination, every hour on the hour (real blood, too, I understand) – and all within the Lincoln Home Area and most of the applicants wanting to be on the Lincoln Home doorstep itself.

Even with these Council successes the contest between commercialism and historic preservation remain (sic) a nip-and-tuck affair. Those Lincoln Home Area property owners having commercial rights, claimed on usage predating our zoning ordinances, maintain within the area a car wash, a gasoline service station, several commercial parking lots, a loan office, a gift shop, two private museums and a highly commercial store modestly advertising itself as Mrs. (not Mr.) Lincoln’s Neighbor – the last five enterprises in the Lincoln Block itself.

And this is shaping into a real tragedy. The thousands of people from these United States and around the world who visit the little Home on Eighth and Jackson Streets in Springfield are entitled to view and feel the history surrounding the site in its 1861 atmosphere – undisturbed by winking signs or blaring microphones of commercial neighbors, honky-tonk or otherwise. …

But the City of Springfield has reached the end of its financial rope. It has too many other pressing obligations in the fields of law enforcement, urban renewal, housing and so on. …

The answer, it seems to me, must be help from either a national private trust, or the program proposed in H.R. 3117; and I urge the latter. We have explored private trust programs with no success, and a fitting memorial to Abraham Lincoln should be a responsibility of the federal government.

We realize that the financial commitments of the Congress are astronomical; and that passage of this Bill would add a fraction to the total; but there are precedents in connection with other Presidents and other governmental heroes. Indeed, in connection with Lincoln himself, the recent restoration of the Ford Theater, here in Washington, is reported to have cost $2,000,000, posing the question: “If it is worth that much to restore the place where Lincoln died, isn’t it worth more than that to protect the home where he and his family lived?”

Then, too, a national park in Lincoln’s memory is no longer the edification of a political, sectional or national hero. It is the act of people from all parts of our nation, from the south, north, east and west, who would emphasize that we are truly a people of humble beginnings dedicated to the proposition that the highest purpose of government is to protect the freedoms of, and promote the economic opportunities of, individual souls – that democracy of the American brand means that the state is subordinate to the people, and not the reverse as in communistic societies.

As another citizen (Sidney Hyman) once said:

“A nation can be a victim of amnesia. It can lose the memories of what it was, and thereby lose the sense of what it is, or wants to be.”

And we do not want such result. Somehow, some way, we must preserve the historic propriety of the Lincoln Home and the area surrounding it.

Howarth’s prepared statement can be viewed in full in the Nelson Howarth Papers, housed in the Archives section of Brookens Library at the University of Illinois Springfield.