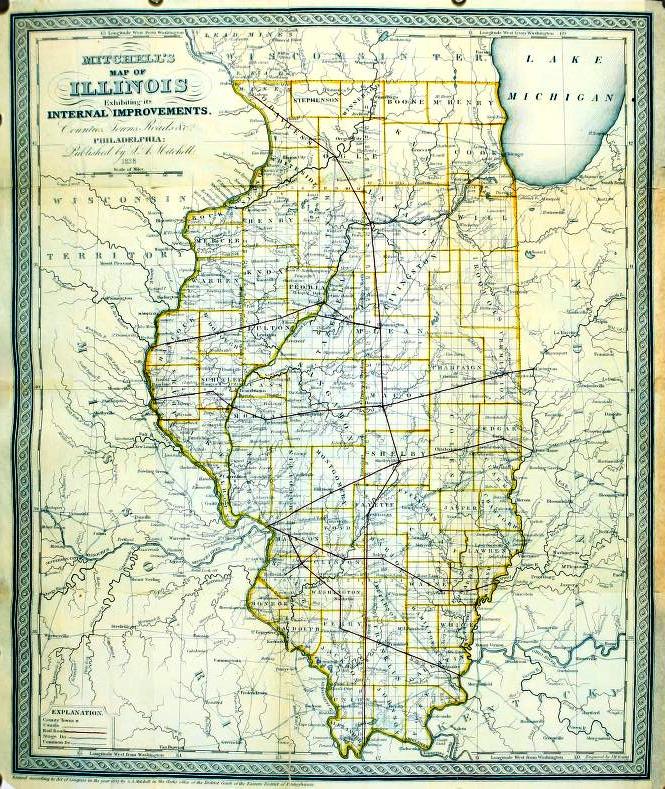 The following description of Sangamon County is taken from Illinois in 1837: A Sketch by H.L. Ellsworth (Philadelphia, 1837); spelling and punctuation from the original. Note that, two years after this was written, the Illinois General Assembly reduced Sangamon County to its present boundaries by creating the new counties of Dane (now Christian), Logan and Menard. Note also that the Sangamon River was never successfully opened to steamboat traffic.

At least one reader has suggested that Ellsworth’s generally rapturous description of central Illinois was due to his undisclosed intention: “mainly to promote the sale of Illinois lands then owned by John Grigg of Philadelphia.”

Thanks to Envision the Past, a website devoted to collecting online publications related to the history of the Great Lakes states, for bringing Ellsworth’s volume to our attention.

SANGAMON County was formed from Bond and Madison counties, in 1821; and although considerably reduced from its original dimensions, is the largest and most populous in the state: it is 48 miles in extent from north to south, 42 miles from east to west on its southern, and upwards of 60 on its northern boundary; containing an area about equal to sixty full townships, or 2160 square miles. The county is bounded north by Tazewell and a small part of M’Lean, east by Macon, south by Montgomery and Macoupin, and west by Morgan and Cass counties.

The county of Sangamon, ever since its first settlement, has been justly esteemed the most desirable tract in the state, and it consequently has been settled with great rapidity. Previous to 1819, there was not a single white inhabitant on the waters of the Sangamon river; at the last census, the inhabitants numbered 17,573; they doubtless now amount to upwards of 20,000. The county is watered by the Sangamon and its tributaries; the chief of these are the south fork of Sangamon, Salt creek and its branches, Sugar and Kickapoo creeks; these all rise without the limits of the county. In addition, there are a number of small and beautiful streams which have their rise and course within the county; these empty into the Sangamon on both sides of the river, and furnish the inhabitants not only with excellent water, but with numerous valuable mill-seats, besides being lined with extensive tracts of first-rate timbered land.

The whole territory, watered by the Sangamon river and its branches, is an Arcadian region, in which nature has delighted to bring together her happiest combinations of landscape. With the exception of the creek bottoms, and the interior of the large prairies, it has a beautiful undulating surface, sufficient to drain the surface of surplus water, and to render it one of the finest agricultural districts in the United States. The prairies are not so extensive as to be incapable of settlement from want of timber. The Sangamon itself is a fine boatable stream of the Illinois, entering it on the east side, 100 miles above the mouth of the Illinois. All the tributaries that enter this beautiful river have sandy and pebbly bottoms, and pure and transparent waters. There is in this district a happy proportion of timber and prairie lands; the soil is of great fertility, being a rich calcareous loam, from one to three feet deep, intermixed with fine sand. The climate is not very different from that of the central parts of New Jersey and Pennsylvania, the latitude being about the same. The summer range for cattle is inexhaustible. The growth of forest trees is similar to that of the rich lands in the western country in general. The proportion of locust, black walnut, peccan, and other trees that indicated the richest soils, is very great. All who have visited this fine tract of country admire the beauty of the landscape which nature has here painted in primeval freshness. So delightful a region was early selected by immigrants from New England, New-York, and North Carolina; more than 200 families had settled themselves here before it was surveyed. It now constitutes several populous counties, inhabited by thriving farmers.

Arcadian vales, with vine-hung bowers,
And grassy nooks, ‘neath beechen shade,
Where dance the never-resting hours,
To music of the bright cascade;
Skies softly beautiful, and blue,
As Italy’s, with stars as bright,
Flowers rich as morning’s sun-rise hue,
And gorgeous as the gemm’d mid-night.
Land of the West! green Forest-Land,
Thus hath Creation’s bounteous hand,
Upon thine ample bosom flung
Charms such as were her gift when the gray world was young!

The prairies frequently contain fine groves of timber, some of which from their appearance, have received the names of Elk-heart Grove, Buffalo-heart Grove, &c. These groves are generally elevated about the surrounding prairie and are most advantageous situations for settlement. The inhabitants chiefly reside on the margins of the timber, extending their plantations to any distance into the prairie. Besides the groves above-mentioned, there are Irish Grove, Spring Island Grove, Sugar Grove, &c.

Elk-heart Grove lies north of Sangamon river, and about 20 miles north-east from Springfield, in eighteen north, three west. It is a beautiful grove of timber, containing 600 or 700 acres, on the right hand of the great road leading to Peoria, Ottawa, and Chicago. The timber is oak, walnut, linden, hickory, sugar-tree, &c. The prairie adjoining is rich soil, rather wet, and furnishes fine summer and winter range for cattle. Several families are settled here.

Buffalo-Heart Grove lies 14 miles north-east from Springfield, and six miles southeasterly from Elk-heart Grove, which it resembles. It is about three miles long, and one mile and half wide, containing about four sections of timber, and 25 or 30 families. The rushes, which cover the prairies around, furnish winter food for cattle.

Irish Grove is on the road from Springfield to Peoria, 18 miles from the former place. It is two miles from Salt creek, and is three miles long, and one mile and a half wide, and contains a settlement of about 50 families. The land is good, and the timber is chiefly oak of various kinds.

Spring Island Grove is from 14 to 20 miles west of Springfield, on the road to Jacksonville. It lies at the head of Spring creek, and is an excellent timbered tract, surrounded with rich prairie, from six to ten miles long, and from two to three miles wide, and has a flourishing settlement. Many excellent springs are found in this tract of country.

Sugar Grove, in the north part of the county, is about 20 miles north of Springfield. It is a fine tract of timber surrounded with fertile prairie, about three miles long, and one mile wide, with a respectable settlement.

On the head-waters of Richland creek is a fine settlement of 50 or 60 families, in township seventeen north, seven west, and fourteen miles north-west from Springfield. The land is high, dry, undulating, and rich. Here is an excellent flouring-mill by ox-power, and a carding machine and clothier’s works, for dressing cloth.

The products of Sangamon county are beef, cattle, pork, wheat flour, corn-meal, butter, cheese, &c.; and soon will include almost every article of a rich agricultural country. The principal part of the surplus produce is sent from Beardstown, but much of its imports will be received, and its exports sent off by its own river, which has already been navigated by steam to the vicinity of Springfield, and when some of its obstructions are removed, will afford convenient navigation for steamboats of the smaller class.

The county seat of Sangamon is Springfield, one of the most thriving towns in Illinois, and recently selected by the legislature as the permanent capital of the state after the year 1840. The other towns are, Huron, Petersburg, New Salem, Salisbury, Athens, Sangamon, Berlin, Auburn, Edinburg, Rochester, Mechanicsburg, George Town, Mount Pulaski, and Postville. Of these, after Springfield, the most important are Athens and Petersburg; the former is about fifteen miles west of north from Springfield, and two from the Sangamon river. It contains several stores, one steam-mill for sawing and flouring, and about 75 families. Petersburg, situated on a beautiful dry prairie bottom on the west bank of the Sangamon river, and 22 miles from Springfield, contains seven stores and one grocery, a steam, saw, and grist mill, and 150 inhabitants. The river is navigable to this point for steamboats of 100 tons burthen, two such having already been navigated thus far. The natural advantages of Petersburg will no doubt make it in time a town of importance, and the place of export and import for Sangamon county. The first sale of lots took place in 1835, and these have in many cases been resold at an advance of from 100 to 600 per cent. New Salem, on the west side of the Sangamon, and 19 or 20 miles north-west from Springfield, has three or four stores, a grist and saw mill, and about 30 families.

It is proposed to erect a new county from the north-western part of Sangamon. This will contain about 15 full townships, or 540 square miles of surface, and will include within its boundaries 60 miles of the lower part of Sangamon river, with a part of Salt creek. It will be bounded north by Tazewell, south by part of Sangamon, and on the north-west by the north-east corner of Schuyler and the extreme south-east corner of Fulton county; from the two last it will be separated by the Illinois river. Its towns will be Huron, Petersburg, New Salem, and Athens, before noticed. No legislative action has yet taken place in relation to the above; but the great extent and rapidly increasing population of Sangamon county, will, no doubt, render a division of its territory necessary in a short time.