The malady that killed thousands of Sangamon County’s elm trees in the late 1940s wasn’t the dreaded Dutch elm disease. It was worse.

The Illinois State Journal sounded the first alarm in its Aug. 3, 1945 edition: “Elm attacked by deadly disease,” the headline read. “Many trees killed; no known treatment.”

A deadly virus disease attacking all varieties of the American elm has appeared as a sudden and destructive epidemic in central and southern Illinois, last year killing over 1,600 trees and this year threatening as many more.

In the Springfield area alone scores of trees have been and will be attacked by the disease, for which there is no known curative or preventive treatment.

Known to botanists as “phloem necrosis,” it is prevalent in this region chiefly around Lake Springfield and northeast through Riverton and Buffalo. …

No American elm has ever been observed to recover. 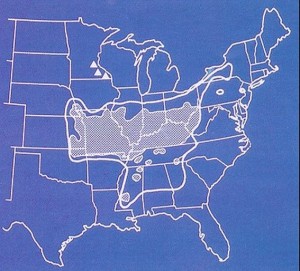 The spread of elm phloem necrosis: extent in 1945, shaded area; extent in 1975, within heavy line. (U.S. Department of Agriculture)

That 1945 summary remains accurate today, excepting only the breadth of the disaster. By the end of the decade, few, if any, American elms survived anywhere in Sangamon County. Thousands of once-stately trees had been reduced to deadfall or, in urban areas, had been removed and replaced by saplings of other species. In Springfield, a massive volunteer effort cleared the city of as many as 4,000 elms within a single month.

The better-known Dutch elm disease is caused by a fungus, while phloem necrosis (also called “elm yellows”) which kills an elm’s phloem, its circulatory system, is due to what the U.S. Department of Agriculture calls “a mycoplasma-like organism.” Both are transmitted by insects or through root grafts.

Antifungal treatments sometimes work against Dutch elm disease. However, the USDA says, “there is no practical control” for phloem necrosis.In September 1946, the Journal published a photo of “prematurely gaunt” elms in the 600 block of South Seventh Street and reported: “In 1944, Illinois trees which appeared healthy in June were leafless and dead by mid-July or early August.”

There is no way to estimate the total number of elms killed by the disease countywide. In Springfield, however, precinct committeemen from both parties did a neighborhood-by-neighborhood tree census in October 1949 and came up with a figure of 2,217 dead elms. Each was labeled for felling with a red and white placard. 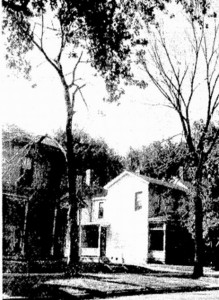 “My part of town looks like an epidemic of measles,” an unnamed worker told the Journal. “Probably more dangerous than measles.”

The number of dead trees overwhelmed the city Public Works Department, which was able to remove only five to eight trees a week. As a result, Dr. C. Robert Fults (1911-66) organized a volunteer tree-cutting blitz in November 1949. Fults closed his optometry and jewelry shop and set up headquarters in the lobby of the Leland Hotel, spending 12 to 16 hours a day marshaling work crews, scheduling equipment and soliciting donations, newspaper reports said.

Hundreds of volunteers using borrowed equipment and hand tools tackled the job. The effort, originally scheduled to be completed over the weekend of Nov. 5-6, ultimately took nearly all month, and the number of trees taken down approached 4,000, nearly double the early estimate. The largest toppled elm – an estimated 20 tons – apparently was cut down in the 1300 block of West Edwards Street.

Twigs and branches were burnt in neighborhood brush fires, while larger logs were taken to Camp Lincoln, sawed into firewood length and offered free of charge to needy families who needed fuel for the winter.

The work went off remarkably without injury, although one man, 60-year-old Vincent “Bill” Gedaminski, suffered a fatal heart attack while working on a tree crew.

A Journal editorial described the effort as the cleanup neared its conclusion on Nov. 23.

Men, tools, trucks and heavy equipment were volunteered by local industries and business houses. Aid was given from as far as neighboring Athens. Coffee and meals, cigars and gloves, gasoline and good fellowship were dispensed freely by citizens with a common purpose.

Thanks for all your efforts, hearty men of the Bunyan stamp, and thanks, too, to all the housewives and schoolboys with hatchets, rakes and brooms who attended to the cleanup work which followed the heavy and hazardous felling operations.

The project formally concluded with a gala – the Woodchoppers Hop, open to anyone who had been on a work crew or contributed in any other way to the effort –held at the Leland Nov. 29. The theme of the evening was a parody song,” Oh, They Cut Down the Dead Elm Tree,” apparently taken from a 1929 tune, “They Cut Down the Old Pine Tree,” made famous by the “Lum and Abner” radio series.

And the Journal looked ahead to the next step:

In less than a month, a hundred years growth of elms has been removed from our city. Each citizen had already suffered the individual anguish of watching each great tree die, so the removal of elm corpses has been an emotional anti-climax.

Yet one cannot drive down surprisingly barren streets, viewing the rows of stumps, without resolve that a city-wide effort of planting must follow in the spirit and thorough manner of execution that has characterized the dead tree crusade.

This entry was posted in Disasters, Local government. Bookmark the permalink.