The Journal of the Illinois State Historical Society for April 1909 to January 1910 included an obituary of Helen Kissick Dodge Edwards (1819-1909), widow of Benjamin Edwards, matriarch of Edwards Place and, as the obituary says, “the ideal of an aristocratic lady.”

Here is the obituary, in full (the photo, originally published at “Hidden in Plain Sight: The Material World of Early Springfield,” a project of Edwards Place, has been added).

The death of Mrs. Helen K. Dodge Edwards removes from the city of Springfield almost the last of those grand women who founded the social structure of the town. 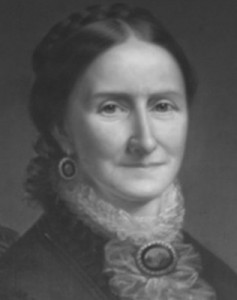 Mrs. Edwards was born in old Kaskaskia in 1819, the daughter of Col. Henry S. Dodge. She was the granddaughter of Dr. John Varick of New York City, and she was connected with many of the old Knickerbocker families, among them the Van Wycks, Van Cortlands and the Van Rensallears. Although Mrs. Edwards was born in Kaskaskia, her father took his family back to New York when she was quite young and she was educated in that city and in New Haven, Conn., to which place the family removed that the sons might attend Yale University. There she met Benjamin Stephenson Edwards, who was a student at the university, and she was married to him on the 13th day of August, 1839.

The young married couple came to Springfield and for a short time, while their own house was being built, made their home at the hospitable house of Ninian Wirt Edwards, the brother of the young husband. The house was the center of hospitality for the large family connection of both Mr. and Mrs. Edwards. In it, on November 4, 1842, were married Abraham Lincoln and Mary Todd, the latter being the sister of Mrs. Ninian W. Edwards. Mrs. Benjamin S. Edwards, with her husband, attended the wedding of Mr. and Mrs. Lincoln, and it is claimed that she was the last of the adult guests at the wedding. There are still living some persons who, as small children, were at the marriage.

Judge and Mrs. Edwards soon established a home in Springfield, in which for seventy years she dispensed a generous and beautiful hospitality. She was a typical lady of the old regime, and she lived in a time when the word society had a special meaning and included only the leading families of the town. The entertainments given by Mrs. Edwards were especially noted. It was the fashion for the prominent families of the town to give parties during the sessions of the general assemblies in Springfield and these parties were called “legislative parties,” to which all the members of the legislature were invited, and they were attended by the society people of the little city, the ladies wearing their prettiest gowns and the hostess giving a most elaborate supper, which was usually spread on a long table, the principal decoration of which was a centerpiece or pyramid made of jellies and creams and sponge cakes and maccaroons, and the viands were abundant and of delicious quality. The supper was prepared by the hostess and her daughters with the assistance of their private servants, as the little city did not boast of professional caterers. At Mrs. Edwards’ home, on such occasions, have been entertained all of the men whose names have been household words in Illinois.

All the governors of the State from Carlin (Thomas Carlin, governor from 1838 to 1842 — ed.) to the present governor (Charles Deneen, 1905-13) have been her acquaintances, although for the past few years, since the death of her husband and owing to the feebleness of old age, she has been unable to take an active part in social affairs. Many of the governors have been intimate friends of Mrs. Edwards and her husband. Among those who have been guests in her house were Orville H. Browning, Robert Blackwell, Ebenezer Peck, William A. Richardson, Jesse K. Dubois, William F. Thornton, E. D. Baker, John A. McClernand, A. P. Field, J. L. D. Morrison, William R. Morrison, Gen. James Shields, Abraham Lincoln, Sidney Breese, John M. Palmer, Stephen T. Logan, Richard Yates, Milton Hay, Richard J. Oglesby, John A. Logan, Lyman Trumbull, Stephen A. Douglas, William H. Bissell, Shelby M. Cullom and many others of the men who have made the power and glory of Illinois.

She was a woman of great natural quickness of mind and she continued her study and her observation of men, women and events during her whole life. She possessed in a high degree the old fashioned and elegant arts of conversation and of letter writing. Her letters were exceptionally charming and her penmanship was clear and elegant. She was a most loyal friend, and if her correspondence with friends of her earlier years had been preserved, the letters would reveal an interesting history of the literature, gossip, fashion and events of the times. Many of the middle-aged men and women have said since the death of Mrs. Edwards that she was the ideal of an aristocratic lady.

Mrs. Edwards was interested in the Illinois State Historical Society, especially in its published transactions, and she enjoyed having the addresses read to her when she was unable to attend the meetings. She was much pleased that the Society elected her one of its honorary members. She died full of years and honors on the 18th day of March, 1909, in her ninetieth year. She left three daughters: Mrs. Helen Condell, Mrs. Alice Ferguson and Mrs. Mary Raymond, and a number of grandchildren and several great-grandchildren.

Her life was beautiful, serene and complete, and it is a lesson which all of us may study with profit.

Kind Heaven! so order the uncertain days
Of my brief mortal season, so defend
From frost and drought and tempest, so befriend
With sun and dew, and bows of promise raise;
So temper to me all the cold world’s ways,
That not in vain my toiling strength I spend
But come in ripeness to the perfect end,
And lie at rest In life’s autumnal haze!

Naught were it then upon the heart to take
The ice of death and in it lie entombed
As when on you the snows of winter break
Ye mourn not for the springtime when ye bloomed.
Ah! let me know the harvesters have blest me
Ere I from all my labors come to rest me.