This entry is a lightly edited version of a presentation given by Mark Johnson, historian for the Illinois Historic Preservation Agency, to the 2014 volunteer dinner hosted by the now-defunct Lincoln Monument Association, a non-profit support group for the Lincoln Tomb. 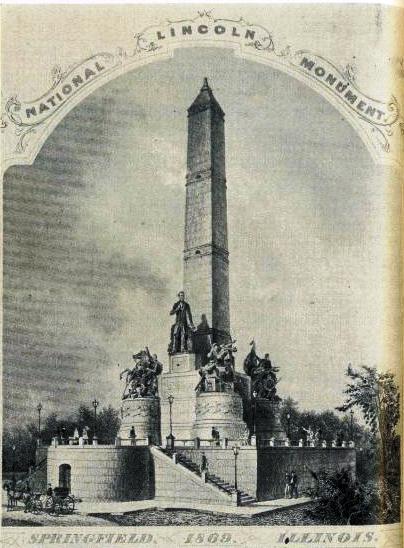 Artist’s conception of Larkin Mead’s accepted design, 1869, showing the obelisk, the Lincoln statue, the state plaques and three of the four miitary groups. A stone balustrade ultimately was installed around the terrace, rather than Mead’s proposed iron railing.

Many visitors to the Lincoln Tomb State Historic Site are curious, but clueless, about the meaning of the statuary that surrounds the base of the structure’s obelisk. That should not be surprising. The tomb is a period piece, an artifact of a specific time in the past, the creation of people living almost 150 years ago who shared important experiences and a visual sense alien to most of today’s visitors.

The monument’s statuary and other sculpted features commemorate the two great accomplishments of the administration of President Abraham Lincoln: the end of human slavery in the United States and the preservation of an unbroken Union. They do so by celebrating the commander-in-chief and the service of the men who fought under his command.

The statuary ensemble and chain of Union

The four military statue groups are vivid portrayals of action. The tomb’s first custodian, John Carroll Power, wrote that they “seem to represent defeat; but they are truthful, because it was through many such scenes that the Union cause became victorious” — a visual representation of the modern expression “freedom is not free.”

The tomb’s important symbolic features appear in a relatively small band circling the obelisk’s base. Designer Larkin Mead meant for them to work together to tell a single, grand story. He wrote in 1868:

At the base of the obelisk … stands the Statue of Abraham Lincoln. On a plane below … are four groups of Statuary, representing the … Infantry, Cavalry, Artillery and marine (Navy). Encircling these pedestals are tablets upon which are written the names of all the states in the Union.

These three elements, Mead wrote, worked together to demonstrate that “through the wise judgment of the President, and through the fatigue and self sacrifice of the brave heroes who carried out his plans the Union was preserved.”

Power summarized the storyline in 1882:

The coat of arms … is intended to typify the Constitution of the United States. Mr. Lincoln, on the pedestal above it … took his stand on the Constitution, as his authority for using the four arms of the war power of the Government …,  which are to be represented in groups around him, to hold together the States, which are represented still lower on the monument, by a cordon of tablets, linking them together, as it were, in a perpetual bond of Union.

The Lincoln statue and ‘coat of arms’

An especially vivid description of the not-yet-placed Lincoln figure appeared in 1873:

The great president stands in an easy posture, grasping in his left hand, a little extended, the scroll of emancipation, and in his right, resting on a fascicle representing the indissoluble union of the states, and draped with the national flag, he holds a pen. The artist has wisely chosen this consummating act — the signing of the emancipation proclamation — to embody his ideal of the lamented patriot. … His natural awkwardness and lankness is wonderfully supplied … (A)s you walk around to get a profile, there is a suggestiveness of humor lurking about the under lip, which calls to mind the “little stories” which were ever ready to light up that sad face, and to oil the wheels of grinding care.

The complex symbolism of the “coat of arms” was described by Power.

It will be observed that the shield, with part of the stars obscured, supports the American Eagle. The olive branch on the ground shows, that having been tendered until it was spurned by the rebels, it was then cast under foot. Then the conflict began, and raged until the chain of slavery was torn asunder, one part remaining grasped in the talons of the eagle, and the other held aloft in his beak.

The Rev. Theodore L. Flood visited the monument in 1887 and described it in The Chatauquan, a weekly newsmagazine he edited. Here is a portion of Flood’s description of the infantry group, which he noted “has been assigned the post of honor … on the right of the statue of Lincoln.”

They have been fired upon by the enemy, and the color bearer killed. The captain has picked up the flag with his right hand and, pointing to the enemy with his left, orders a bayonet charge; a private soldier with musket in hand is obeying the order; the drummer boy loosens his cap, throws away his haversack, puts his drumstick in the keeper, and with revolver in hand engages in the conflict. An exploded shell at the officer’s feet tells the story of battles fought on the same ground.

A few years earlier, Power seemed to mildly criticize one of the characters.

The drummer boy has become excited, lost his cap, thrown away his haversack, and drawn a revolver to take part in the conflict, and then looks as though he was not sure whether to fight or get behind the officer.

Confused or not, the drummer boy is an important symbol of the participation of relatively young men in the military during the Civil War. Many youngsters in their early to mid teens served in this capacity. A similar character is are portrayed in the navy group as well.

The cavalry group … holds the second position of honor, being on the corner at Lincoln’s left hand. The trumpeter, mortally wounded has fallen from his horse; a comrade comes to his assistance, and while giving him support, is, with sword in hand, warding off the blows of the enemy. The horse is almost unmanageable; nervous and excited, with nostrils distended, and mane waving, he tries in vain to break away from his late rider who retains a death grip on the reins. It is an exciting scene, true to the reality on many a hard-fought field.

The naval group … makes a good picture of a scene on the deck of a war vessel or gunboat. The great mortar is well poised, the gunner has a shell ready to be hoisted into the mortar, a boy called the “powder monkey,” because he carries the cartridges to the gun, is perched on top of the mortar. … The commander with solemn countenance stands with his back to the gun, looking off to the distance, as if waiting and watching for an engagement to be precipitated.

Appropriately for Illinois, this scene may well represent those seen on the gunboats that plied the Mississippi, Cumberland, Tennessee, and other rivers during the war. Many Illinoisans served as crewmen on such craft, playing an important role in the capture of Vicksburg and other river strongholds.

A portion of Flood’s description in The Chautauquan:

The artillery group … consists of a cannon that has been dismounted by a cannon-ball fired by the enemies’ gun; a wounded soldier lies by the cannon bracing himself with one hand on the ground, and with the gun swab raised aloft with the other hand, he faces the enemy. The officer in charge of the gun has escaped unhurt, and he stands with … his face expressing determination and victory. A young, inexperienced soldier standing with lifted hands near the muzzle of the gun, seems to … (be) astonished by the ruthless havoc. … Mr. Mead, the artist, writes that this group represents a scene which he witnessed in front of Yorktown.

Sculptor Larkin Mead recalled that he began work on a Lincoln monument design in late 1864, months before the president’s murder.

“At that time,” he wrote, “there was no proposal made for a monument to him, but I knew that there would sometime be a monument made to one so great and good as he was.”

That design contains many features eventually incorporated into the Lincoln Tomb. Among them are the statue portraying Lincoln at the moment of signing the Emancipation Proclamation and the four groups of military action figures.

Larkin Mead depiction of “Capt. Wheeler’s Battery struck by lightning” during the battle of Fairoaks, 1862 (from Harper’s Weekly, July 5, 1862)

The scenes portrayed in the military groups did not spring only from Mead’s imagination. He had traveled as a sketch artist with the Army of the Potomac in the early days of the Civil War, and a number of sketches by Mead were the bases for wood engravings that appeared in Harper’s Weekly, one of the great mass-circulation newspapers of the day.

Editor’s note: For an annotated photo tour of the tomb and its notable statuary, go to Abraham Lincoln Online.

From a presentation to the Lincoln Monument Association volunteer dinner, Oct. 15, 2014. Our thanks to Mark Johnson.