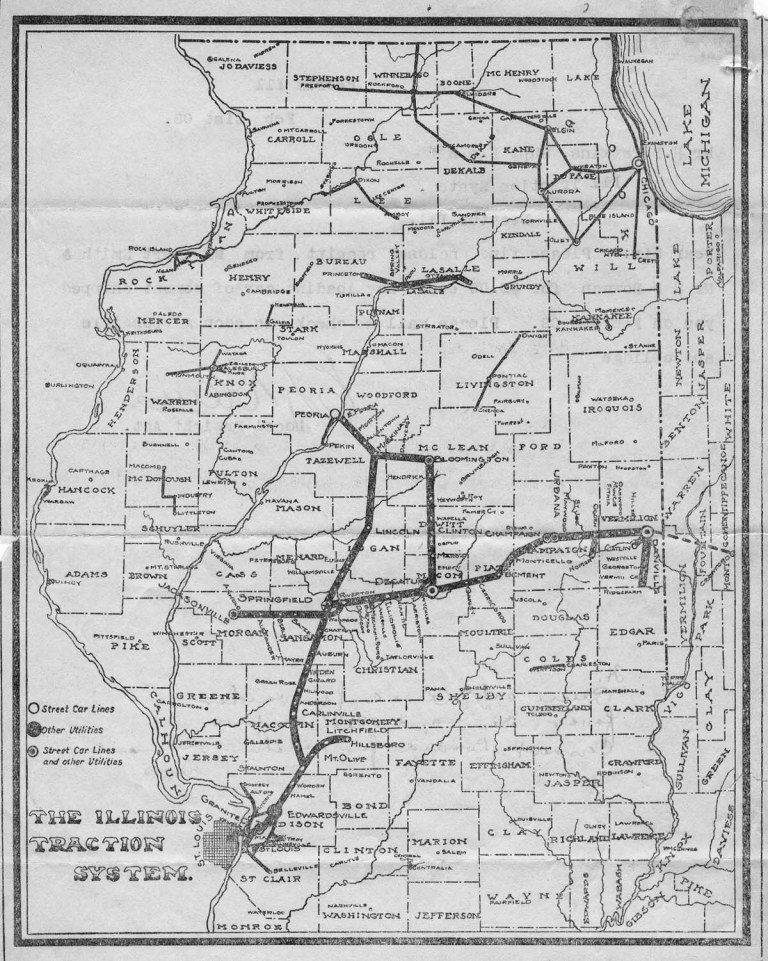 The Illinois Traction System, though originally an electric railway, was far more than a trolley.

The ITS, also widely known as “the interurban” or “the traction,” was, in fact, a lifeline for many in central Illinois during the first half of the 20th century.  The interurban provided frequent, cheap and comfortable transportation to people who, prior to widespread automobile access, had no other convenient way of getting from town to town.

The traction system was the brainchild of Petersburg native William B. McKinley, who also worked briefly in a Springfield drugstore and later became a U.S. senator.  McKinley, who also had major financial interests in electric utilities, assembled the early ITS from several smaller interurban lines beginning in 1901. 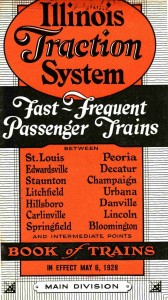 As McKinley consolidated and expanded operations from his base in Champaign, the ITS eventually offered electric passenger service on 550 miles of track from St. Louis to Springfield, Champaign, Danville, Bloomington-Normal and Peoria. The ITS even had its own Mississippi River crossing, the McKinley Bridge linking Illinois and St. Louis.

As late as 1948, when the Interurban (by then operating as the Illinois Terminal railroad) was losing customers, the line still boasted 48 stops on its 37-mile route between Peoria and Bloomington. As the McLean County Museum of History explains:

Most of these were not listed on passenger timetables, but were rather “flag” stops where one could wave a cloth or flag telling the oncoming car to “stop when you get to me.” You could wave any color except red — that meant “stop right now.”

The line also pioneered many rider amenities. The Illinois Traction was the first electric railway to offer sleeping car service, for instance, and parlor cars were added at the same time.

“The most modern comfort in passenger service was a hallmark of the system,” wrote Dale Jenkins for the Illinois Traction Society. He added:

Regardless of the era studied, the Illinois Terminal generally did it with style and panache. Parlor cars sported mahogany and Spanish leather. Its electric freight motors, whether in Brewster green or “traction orange”, were distinctly IT. GP7’s (diesel electric locomotives, used later in the ITS/IT’s history — ed.) wore an eye-catching green and yellow paint scheme when black and white was the norm, if not the rule.

The system’s passenger numbers began to fall during the Depression in the 1930s. Ridership temporarily improved during World War II, when gasoline and tires for automobiles were hard to come by. The line also provided invaluable service carrying workers from Decatur and Springfield to the massive Sangamon Ordnance Plant from 1942 to 1945. Its decline, however, resumed after the war.

The road’s last mainline passenger service was a three-car special that left from (and returned to) the ITS’s passenger terminal at 2015 Clearlake Ave. on March 2, 1956. Reduced to a freight line, the Illinois Terminal itself merged with the Norfolk & Western Railway in 1982.

The Clearlake Avenue station in Springfield has been demolished, but some former IT right-of-way has been transformed into bike-and-hike trails. In Sangamon County, the name of the Interurban Trail between Springfield and Chatham recognizes the fact that the trail is built along a line that once carried people to jobs, shopping and excursions via the Illinois Traction System.

Information about the Illinois Traction System/Illinois Terminal railroad is widely available on the internet. In addition to the sources above, here are some starting points:

— Richard Parks has compiled a useful chronology of the interurban and its main segments.

— Walt Zyznieuski interviewed people who remembered riding the interurban for an Illinois Times article, “A Ride Through Time,” in 2003.

— American Rails’ look at the ITS adds corporate and equipment context to the line’s story.

2 Responses to The interurban railway