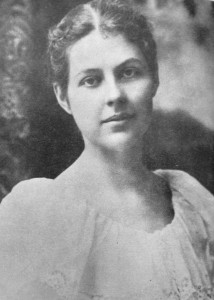 Elizabeth Brown Ide (1873-1978), who was born into money and married more, could have been merely a socialite. Instead, she became Springfield’s most prominent children’s advocate during the early 20th century.

Ide’s parents were Christopher Brown and Caroline Owsley Brown, both of whom were community activists themselves. (Christopher Brown, a prominent Springfield attorney, had founded the Bettie Stuart Institute, a school for girls, in memory of his first wife following her early death.) At age 23, Elizabeth married Francis P. Ide (1871-1930), the son of Albert Ide, a pioneer of electric generation; Francis followed his father into management of the A.L. Ide and Sons Engine Works.

Elizabeth Ide began her avocation of social work as a Sunday School teacher at the Home for the Friendless, which housed indigent children and a few women. She later became secretary of the home’s “board of lady managers.” However, she found, the ladies had not been managing very closely.

Ide described those conditions  in Rewarding Years Recalled, the memoirs of Ide and her parents, which was published in 1973.

The Matron whom I first remember in charge was Mrs. Harper. … (W)hile I suppose she did the best she knew, the home was far from attractive. … There were all sorts and conditions of children. I remember an epileptic girl who would have a fit now and then in Sunday School. There were feeble-minded children among the others. The woman in charge of the nursery was a very motherly person, in her feelings, but I judge from the high mortality among the babies was not skilled otherwise, and no one knew much at that time of sanitation. I remember Mts. Matheny’s telling me years afterward of two babies being brought in at the same time and no record was made. The nurse, Miss Hall, knew them apart, but she died suddenly the next night and the identity of the children was lost. As one of them died shortly, it made a very great difference as to which one was which.

It was taken for granted in that day that an institution must smell. One just had to go ahead with good works and endure it, but the moment one entered the hall, one met it. There were many poor, diseased bits of humanity that spent a few weeks or months there, and they were released from suffering …

The country people helped out with provisions, and no one worried about a balanced diet. Children were given out from written recommendations, principally to farming people.

Ide, wrote Melinda Fish Kwedar in Unsung Heroines: A Salute to Springfield Women (1977), “insisted that operation of the home be placed on a professional basis and that staff members be trained.”

Ide later was one of only two woman members of the organizing committee of the 1914 Springfield Survey, a massive, and never replicated, examination of economic and social conditions in the city. Ide recruited and directed the 100 volunteers, also mostly women, who gathered data for the survey.

Aside from the sheer scope of the work, collecting information for the survey often required imagination. In a series of oral history interviews done for the then-Sangamon State University in the 1970s, Ide explained that, at the time, Springfield didn’t even have a way to keep track of births.

(T)o show you an example of how difficult it was to get the birthrate or anything like that–because there were no county statistics at that time–a volunteer went to one of the Catholic priests, Father … I can’t remember his name now … and he let us take the birth certificates that were for the Catholic church. And that was the only way we could get any figures on the birthrate.

Partly because survey results  showed a 20 percent infant mortality rate east of 10th Street, Ide became one of the main organizers of a system of “baby stations,” wellness clinics where mothers could see doctors and get nutrition help for their children.

“They measured, found out if they were getting their food, weighing as they should,” Ide told the SSU interviewer. “And the mothers could consult the doctors; there was no charge, of course.

Ide, whose own son had died as an infant, wrote later that “To be connected with (local infant welfare efforts) has been a joy and a continued interest for years.”

“Another outgrowth of the survey were child guidance clinics, begun in 1925 to evaluate children with emotional problems,” Kwedar wrote in her profile of Ide. “They developed into the present Springfield Mental Health Center,” where Ide was still honorary chairman as of a year before her death. Ide also was a longtime member of the board of the Visiting Nurses Agency, which was formed in 1915.

“It seems to me that there is nothing that has shown such great improvement in my lifetime as the care and understanding of children,” Ide wrote in her portion of Rewarding Years Recalled.

Kwedar’s evaluation: “Much of the improvement was due to her efforts.”

More information: Rewarding Years Recalled (1973) is an anthology of the memoirs of Elizabeth Brown Ide and her parents, Christopher Brown and Elizabeth Owsley Brown. Ide wrote her portion in 1932. The book can be read at Lincoln Library’s Sangamon Valley Collection.

Melinda Fish Kwedar’s collection of profiles, Unsung Heroines: A Salute to Springfield Women (1977), a Sangamon County Historical Society publication, is out of print. It also may be read at the Sangamon Valley Collection.