The literary club movement began early in the 19th century as a consequence of the Industrial Revolution. The first recorded occurrence was a lecture series started in Milbury, Mass., in 1826. By 1834, 3,000 groups had been organized to listen to lectures. By 1840, clearing houses were acting as agents for speakers such as Ralph Waldo Emerson, Henry David Thoreau, Nathaniel Hawthorne, Susan B. Anthony, Daniel Webster and many others. Both men and women attended these lectures. 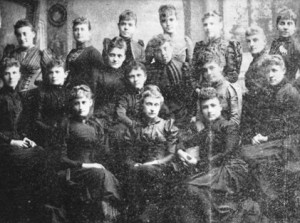 Lyceum meetings were pretty much put on hold during the Civil War, but the war also brought women out of their homes to work together making flags, clothes, etc. to help the war effort. Following the Civil War, many museums and libraries were formed across the country, the land grant universities were created, and the Department of Agriculture established to disseminate information to the rural population. The era saw a virtual explosion of learning.

The government’s response to anti-immigration sentiment in the second half of the 19th century was to establish literacy as a criteria for assessing the “quality of those who sought to enter the country.” In addition to governmental and philanthropic efforts to expand education, the literary movement itself spawned hundreds of clubs, circles, and associations in which people of like backgrounds endeavored to educate each other. The suffrage movement, too, had women thinking more about their place in the community.

A myriad of women’s literary clubs sprang up in Springfield, but only a few have left any footprints in the community. Here is a look at several.

A new bride from St. Louis, Susan Young Lanphier, began one of those early clubs, the Shakespeare Club. Most likely she had been a member of such a club in St. Louis as there were then, and are now, Shakespeare Clubs all around the country. On March 6, 1887, Lanphier gathered together a group of young women, all as yet unmarried, in her home at 1120 S. Seventh St. for the purpose of starting a club. (It seems to have been necessary for at least one woman meeting with a group of young ladies to be married.) The Shakespeare Club was limited to 18 members. They studied Shakespeare for the first nine  years of the club’s existence and then went on to the study of various countries’ histories and other subjects.

The Illinois State Journal published an extensive article about the club’s 40th anniversary celebration on Feb. 5, 1928:

Asked whether or not the club members found that the days for meeting rolled around too often, Mrs. Lanphier answered with an ‘Indeed, no! We find that the meetings are always too far apart, for you see we are a very congenial group and really enjoy meeting with each other.’

The club meetings are held at 3 o’clock on Friday afternoons and the programs start and last for just one hour and a half. This is a rule seldom broken.

One can guess that the club may well have been serious about study in the beginning, but probably deteriorated into a gathering of friends once a week over the years. Since the Shakespeare Club stopped taking in new members, it may not come as a surprise that the club is no longer in existence.

The Every Wednesday Club

The Every Wednesday Club was created in Springfield about the same time as the Shakespeare Club, but there are no records as to its beginning or its ending. Springfield’s chapter was formed as an auxiliary of the Chicago chapter of a group of the same name by Julie Ridgely Rea, who was its long-time local president. Her sister, Mary Ridgely Hay, daughter of Charles Ridgely of Springfield, was president of the Chicago chapter for many years. 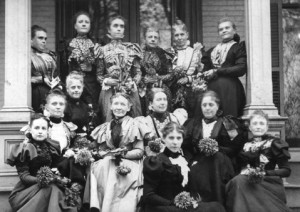 Sunnyside Circle, 1898. Catharine Frazee Lindsay, the mother of poet Vachel Lindsay, is in the lighter dress in the center.

The Sunnyside Club began in the fall of 1887. A woman from Decatur met with some ladies at the home of Mrs. H. S. Dickerman in June of that year and urged them to start a group. She was a dictionary and encyclopedia saleswoman who had prepared some study booklets to aid such an organization.

The group had her back in October to give a lecture on American literature, and from that, formed an organization they first called the South Fourth Street Circle (some of their husbands had objected to their using the term “club”).  When it was pointed that one member of the group lived on South Fifth, they changed the name to the Southside Social Literacy Circle.

Their topic that first year was Washington Irving, whose home on the Hudson River was known as Sunnyside. So, a couple of years later, when Southside took in someone from another part of the city, members changed the name to Sunnyside to memorialize that first-year topic. (To celebrate the club’s 100th anniversary, members visited Sunnyside.)

Sunnyside studied authors for a few years and then switched to a travel theme. The switch in programming very possibly was a result of the club’s decision to no longer purchase already prepared programs.

Sunnyside still meets bi-weekly from October until June. Membership is limited to 25, although quite a few honorary members also attend regularly. They have continued to meet in private homes.

A particular requirement of Sunnyside is that membership is limited to a single member from any one family. That seems to have been a requirement other clubs did not have, as mothers, daughters, sisters and cousins abounded in the other clubs in Springfield, and many people seemed to belong to a multitude of clubs at once.

The other women’s literary club still in existence is the Anti-Rust Club, founded by Katie Dresser White, who proposed the idea to a few friends she invited to her father’s home early in February 1894. A constitution was signed by 18 members in March of that year.

The Browning motto from which the club gets its name was also adopted almost immediately:

The early membership consisted mostly of relatives and very close friends of Katie and her mother.  It seems likely that the Anti-Rust Club was started in reaction to Sunnyside’s policy of not allowing relatives to join, since many of Anti-Rust’s beginning members had relationship connections to members of Sunnyside. 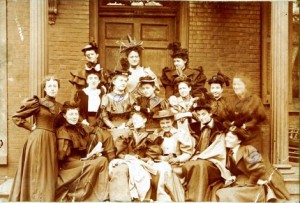 During its first year, Anti-Rust took on the subject of “women.” The club then spent several years studying history, in 100-year increments, and literature. Reviewing the various subjects over the years, it becomes apparent that there was a more classical bent to the choice of subject of the year than is followed today.

That first year, papers were fairly short, with sometimes two or three given a morning, which meant that some members gave two or even three papers during the year. That most likely came from the “lessons” used by most of the clubs.

In those early years, the clubs were an integral part of the community. Meetings were often announced as to time, place and subject. Synopses of the papers often were published in the newspaper the following day, sometimes even with a listing of who had been in attendance.

In return, the clubs also demonstrated a responsibility to the community. Some clubs avowed an interest in improving social conditions and actively worked to do so. Anti-Rust did not, though members did make annual donations to the Community Chest or United Charities, even throughout the depression. Anti-Rust also repeatedly welcomed a speaker from the League of Women Voters to keep members abreast of political issues, and they did offer their talents to help the community.

Plans for the Springfield Survey were announced in 1910, and Anti-Rust was asked for a donation. Members decided to put on a play and charge admission, rather than assess the membership. In May of 1911 Anti-Rust presented the play Cranford by Marguerite Merrington from Elizabeth Gaskell’s famous story. The play netted the princely sum of $176.53 for the survey.

The survey, which not only provided a record of what the city was lacking but provided a road map for the city’s future, was completed in 1914. Its findings, published over the next several years, are available both online and in the Sangamon Valley Collection of Lincoln Library.

In 1914, when asked by Dr. George Palmer of the Palmer Sanatorium for support in the fight against tuberculosis, Anti-Rust put on two performances of a play written by one of its own members, the talented Octavia Roberts. The play was called Happy Occasions for those performances, but was later published professionally under the title of Happy Days.

Club archives indicate that various guest speakers were invited to Anti-Rust from time to time. In 1913 Anti Rust took on the subject of “Illinois” and invited Sunnyside, Every Wednesday and the Shakespeare Club to hear Judge Sherman speak about Abraham Lincoln in February, and in April they had a Mr. Douglas, grandson of Stephen A. Douglas, address the group. In 1919, a year when there was no printed program because of the restraints of World War I, both Vachel Lindsay and Robert C. Lanphier addressed the group. In 1968 Jo Saner hosted members and their spouses for dinner and a talk by Dr. Thomas Masters on Samuel Johnson in connection with the topic “James Boswell’s Friends and the Age of Enlightenment,” as Dr. Masters had long been a student of the era.

The Author’s Club, the Fortnightly and other clubs are mentioned in various newspapers of the period, but no records exist on them.