Springfield’s Lithuanian historian, Sandy Baksys, covers the beginnings of McDonald’s restaurants in Springfield in three posts on her Lithuanians in Springfield, Illinois web site. Here’s how she led off the first installment:

Anybody who’s eaten a McDonald’s hamburger in Springfield has feasted on a bit of local Lithuanian-American history involving a family aptly named “Mack” (Lith: Makarauskas). McDonald’s first local franchisee, John Mack, Sr., was born in Lithuania in 1912 of parents Stanley and Agnes Makarauskas. He was a coal miner before operating Mack’s Food Store at 1501 Keys Ave.

In 1957, John, Sr. and his wife Mary (Gidus) Mack had the foresight to make the leap from their corner grocery to the brave, new world of fast food. After a personal call from McDonald’s founder Ray Kroc and then being turned down by many banks, a $100,000 loan for the Macks from Illinois National Bank finally came through, and John and Mary opened their first restaurant on S. Sixth St. at the perfect location: just outside the gates of farm machinery factory Allis Chalmers, where two shifts a day of hungry workers could appreciate a 15-cent burger with 10-cent fries. …

At the peak of their empire, the Macks were exclusive franchisees of eight McDonald’s all over Springfield. 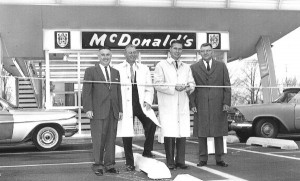 John Mack Sr. died in 1974, and the Mack family got out of the burger business in 1989. When they exited, the Macks owned eight restaurants: on Sixth Street, MacArthur Boulevard, West Jefferson Street, the Old State Capitol Plaza (Fifth & Adams streets), Chatham Road, the corner of Ninth Street and North Grand Avenue and in the Capital City Shopping Center and White Oaks Mall.

Much more information is at Baksys’ web site; here are direct links to the three articles: