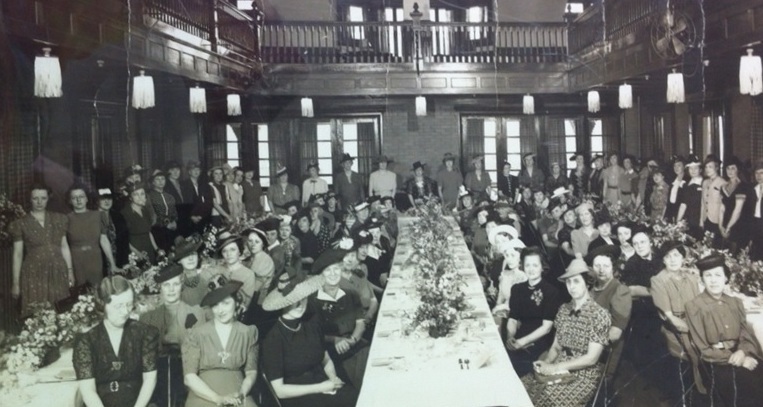 Carol J. Edwards described the atmosphere at the tea, along with the club’s first months, in a presentation created for the SCCC’s 90th anniversary in 2014:

There were 75 guests in attendance. Tables and cabinets were filled with almost transparent painted china and sparkling irradiant glass.

This sparked an interest for a long-felt need in our city – the formation of a club which would develop this fine art which is so close to feminine hearts. …

Most of the programs of these early days were “home talent,” with all members of the Club participating. The first exhibit was held at Lincoln Library for three days – the most important event of the year!

In the fall of 1925, an exhibit of hand-decorated china was displayed.  It was considered the finest exhibit of china ever shown in Springfield – at any time.

One hundred guests were present, but there were only six members of the Ceramics Society.

The club got a slow start, and in February 1926, members voted to expand its horizons to include all phases of art, not just ceramics. The name was changed to the current Springfield Ceramics and Crafts Club in December 1928.

Fundraising efforts over the years had built the club’s “sinking fund” to $19,509 by 1970, and the SCCC was able to buy its own club building at 3500 S. Sixth St. in 1971. The club rented out the second floor as an apartment, income from which paid the taxes and insurance on the building.

However, the SCCC quickly outgrew its Sixth Street quarters and in 1977, the group bought its present facility at 2626 S. Pasfield St. “A nice profit” from the sale of the Sixth Street building resulted in the club needing to borrow a relatively small amount for the new headquarters, and that mortgage was paid off in 1986. The house next door, which the club had purchased at the same time, was moved in 1984, and a new parking lot was completed the next year.

A highlight of the club’s year is the annual Table Setting Exhibit and Luncheon, first held in 1930. However, the club’s activities are far from limited to fancy table settings.

The club also has expanded its outreach programs over the years. As of 2014, regular after-school programs were held at Black Hawk Elementary School, and members also help at some Harvard Park Elementary School functions; club members make caps, blankets and other items for premature infants and hospitalized children through Basket of Hope; and the club annually provides a $1,000 scholarship to an art student at a local college.

As it celebrated its 90th year, the Springfield Ceramics and Crafts Club boasted 150 active members, 87 life members and a waiting list of five.  Twenty crafts were taught in the summer of 2013 and 57 in the fall-winter-spring season of 2013-2014, making a total of seventy-seven different crafts for the fiscal year.

Source: Presentation by Carol J. Edwards for the 90th anniversary of the Springfield Ceramics and Crafts Club

This entry was posted in Arts and letters, Prominent figures, Transportation. Bookmark the permalink.