Fleetwood Lindley and the reburial of Abraham Lincoln

Fleetwood Lindley (1887-1963) was, at the time of his death, the last living person to have seen the face of President Abraham Lincoln.

Lindley was 14 years old* on Sept. 26, 1901, the day Lincoln’s casket was opened for the last time prior to being buried in a concrete-and-steel vault 10 feet below the floor of the Lincoln Tomb State Historic Site.

Lindley’s father, Joseph, was a member of the Lincoln Guard of Honor, a group of men who had safeguarded Lincoln’s casket since a bumbling gang of counterfeiters had attempted to steal the body in 1876.

Finally, Lincoln’s surviving son Robert asked in 1901 that his father be buried securely below the floor of the tomb. To verify the burial, a group of people gathered in the tomb’s burial chamber as the casket was opened one last time. 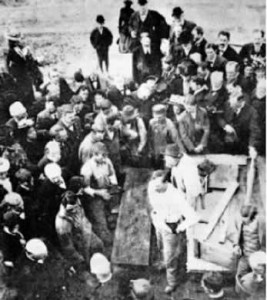 Lincoln’s coffin in 1901, center (pine casing at right). Note that coffin was not opened outside; it was opened in tomb’s burial chamber. (Roger J. Norton)

“Fleetwood told me that his father called his school and his teacher suddenly dismissed him in the middle of class,” Rietveld wrote. “His father had asked that he hurry to the tomb, but to tell no one about his errand. He did not know what he would see …”

Only part of the casket’s cover was removed, exposing Lincoln’s face and the top of his body. Thirty-six years after his assassination, Lincoln’s complexion had become dark brown, but with a white powdery covering that Rietveld wrote was chalk that had been applied by an undertaker during the funeral trip in 1865. However, other sources have suggested the white substance was mold growing on the body.

Nonetheless, Lincoln was entirely recognizable, Lindley and others present at the opening confirmed. When the identification was complete, the casket was closed again and lowered into the final crypt. Fleetwood Lindley said he held one of the leather straps as the coffin was lowered.

“I was not scared at the time,” Lindley told an interviewer a few days before his death, “but I slept with Lincoln for the next six months.”

Several of those present certified that the remains were Lincoln’s in notices published in local newspapers:

We … certify that the remains so viewed by us are in fact those of Abraham Lincoln: that we saw the same before they were first laid at rest; …

We further certify that we were present at the place and day first above mentioned and saw the same casket containing these sacred remains placed in their final resting place in the Lincoln monument ….

The certification was signed by Black, as a member of the National Lincoln Monument Association, and Reece, Conkling, Edward Johnson and Joseph Lindley, as members of the Lincoln Guard of Honor.

Fleetwood Lindley later became a Springfield florist. He also was active in Ansar Shrine, serving as potentate in 1951. He is buried at Oak Ridge Cemetery.

Further note: SangamonLink thanks commenter D. Finnigan for catching our error regarding the year Lindley was born.

This entry was posted in Lincoln Tomb, Lincoln, Abraham and tagged Ansar Shrine. Bookmark the permalink.

4 Responses to Fleetwood Lindley and the reburial of Abraham Lincoln