‘Hell at Midnight in Springfield’ 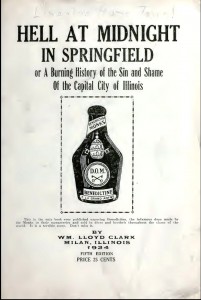 Hell at Midnight in Springfield: or A Burning History of the Sin and Shame of the Capital City of Illinois was a rant against vice, alcohol and, especially, “political Romanism” written by professional anti-Catholic William Lloyd Clark after a visit to Springfield’s vice district in 1909.

Clark (1869-1935) a resident of tiny Milan, Ill., published dozens of similar booklets over a nearly 50-year career of “speaking and writing against Romanism.” In 1913, 25 years into that career, he claimed already to have traveled 300,000 miles (using a “mammoth lecture wagon”) given 3,000 lectures and sold nearly 300,000 copies of the 13 pamphlets he had written to that point. He later took credit for helping defeat Democratic presidential candidate Al Smith, a Catholic, in the 1928 presidential election.

Hell at Midnight, first published in 1910, went through five editions by 1924, even though the first printing led to charges that Clark had sent “lewd, lascivious, obscene and filthy prints and letters through the mails.” Clark himself reported the results of the case when the second edition came out:

For advertising the first edition of this book through the mails I was indicted, tried and fined in a Federal Cout, Peoria, Ill., October 20, 1911. Judge Humphreys (U.S. Judge J. Otis Humphrey — ed.), a citizen of Springfield, assessed a fine of $400.00 and costs on the author of this book; and this in the face of the fact that in this country there is published and sent through the mails tons of salacious fiction, appealing to every dormant pruriency of boy or girl; but you must not publish THE TRUTH concerning actual, horrible, ruinous condition, as they now exist, although your motive is to save pure girls from falling into an earthly hell. … 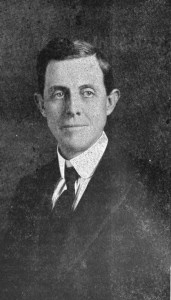 The paragraph above gives only a sense of Clark’s prose. However, even making allowance for Clark’s awe-inspiring talent for invective — not to mention his antipathy to Catholics, immigrants, Jews and (to a lesser extent) blacks — Hell in Springfield’s description of the city’s vice district probably hit local residents uncomfortably close to home.  A sample:

I think it was about 10:30 I saw an auto loaded with fashionably dressed men and women stop in front of Dave O’Connor’s “House of David” on North Sixth Street. They ordered the drinks delivered, and out in the public street laughed and shamelessly quaffed the beverages of Hell. And down through the red light district the “Red Devil” carried its load of rich and dissipated merrymakers, stopping and ordering drinks from the lowest shambles. …

The saloon dominates this entire district. It is true the house of shame is there, but if the saloon is closed tonight, the brothel will move out tomorrow. In nearly every one of these saloons there is a side stairway so arranged that one can pass from the bar room into a hallway and upstairs without passing out upon the street. Looking at these upstairs apartments from the hallway or the street here is almost no evidence of life, but watch them closely for a while and you will see people pass up. Sometimes young men, often older men. Sometimes a girl in her teens, in company with a man old enough to be her father. In almost every case these places are used for gambling or prostitution, or they are assignation houses.

About ten o’clock the street woman makes her appearance. They are mostly girls who have served an apprenticeship in the house of shame and have become sufficiently brazen to solicit men in the public street. Many of them are girls whose beauty has faded until they are no longer desirable for brothel services and the brothel madam, after her bank book is smeared with their flesh and blood, kicks them into the street to tread the cinder path of sin onward toward death and hell. And around the dusty stairway of some old shack you will peer into the spectral and ghastly face of some old hag, once a sweet pure girl, the light and hope of a mother’s life, but the liquor traffic had a place for her, and this great rich republic needed revenue, and the city needed blood money to reduce the tax of Dives, and the policeman on his beat, a dirty nondescript, needed a rake-off, and there she stands — “a rag of bone and a hank of hair” — with one foot in the grave, the hideous mockery of a grin upon her shriveled and wasted face, beckoning you to follow her into Hell. She is but one of a thousand; the life is very short. In a little while she drains the cup to its bitter dregs, and in an unmarked span of earth she lies dead and forgotten.

Clark aims a surprising amount of blame for Springfield’s wide-open vice at an unlikely target — Benedictine liqueur — apparently solely because it is said to have been developed by Catholic monks of the Benedictine order at an abbey in France. But he leaves plenty of responsibility to go around.

Springfield is the state capital of a great and glorious commonwealth. Under the very observation of the Governor this capital city has become notorious as a center for all forms of vice and lawlessness. The mayor’s office has been equally blind in relation to the criminal conditions of the city. …

Standing in the door of the Police Court of Springfield one can fire a pistol ball over several solid blocks of places of ill-repute ranging from the lowest and dirtiest dives imaginable to the most luxurious and aristocratic palaces of sin. They exist in violation of law, under police surveillance and by virtue of the vilest system of toleration ever devised by the vampires of the under-world. The trend of municipal government seems to be toward grand larceny.

The State Government is no better. Governor Deneen, though in full knowledge of the lawlessness of the capital city, has offered no protest. And why should he when his picture hung in the windows of the lowest dives in Springfield and Chicago as the favorite candidate of the short hairs and silk stockings during the recent campaign.

The brothel pimps, gamblers and saloon keepers lined up for this man because from him they had nothing to fear. …

The most disgraceful spectacle in the history of Illinois was the Yates-Deneen campaign before the primaries (Charles Deneen defeated Richard Yates for the Republican nomination for governor in 1908 — ed.). If what these two men have said about each other is true they are the two biggest rascals that ever escaped a felon’s cell, and if what they said about each other is not true they should go on record (as) the two champion liars of this universe.  …

Clark’s indictment was one of several aimed at what was called Springfield’s “segregated district,” the area east of downtown where vice was supposed to be confined during the early 20th century. The Springfield Survey examined the issue, in far more measured terms than Clark, in 1914, and vice in Springfield was part of a state Senate committee investigation in 1913.

2 Responses to ‘Hell at Midnight in Springfield’