The four paintings below show all four sides of the Springfield square in the late 1840s or early 1850s. They are unusual in two ways: their perspective, presumably from the cupola of what now is the Old State Capitol; and the fact that the painter has never been definitively identified … and probably never will be. 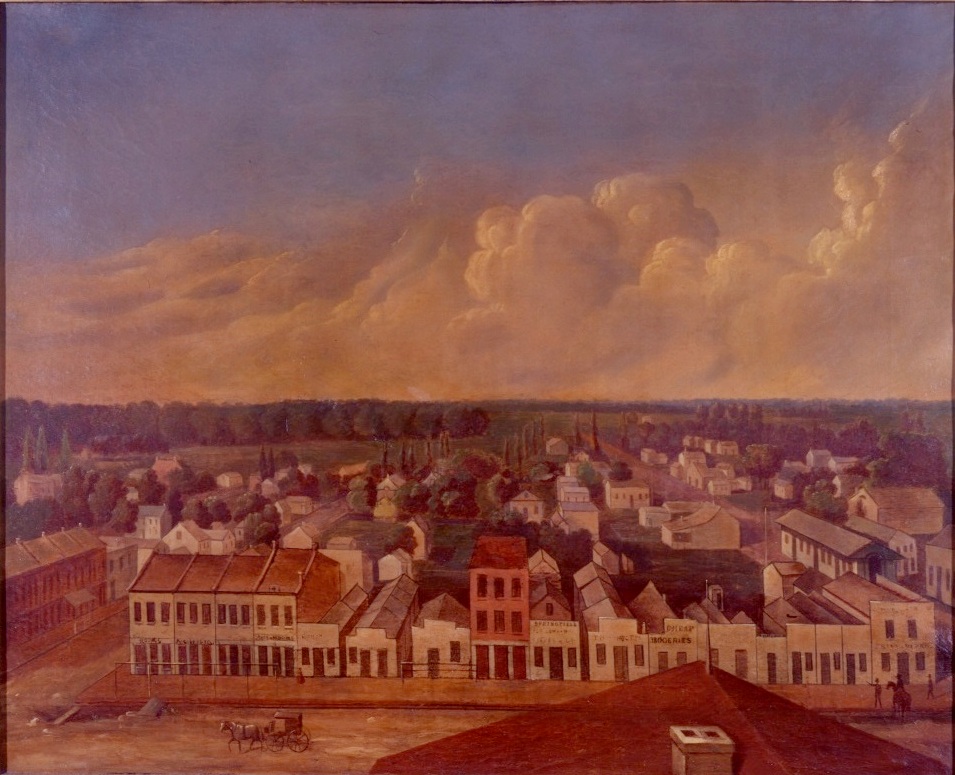 North side of the square; Abraham Lincoln’s first law office (with partner John T. Stuart) was in the Hoffman’s Row buildings, left (northwest) end of block. 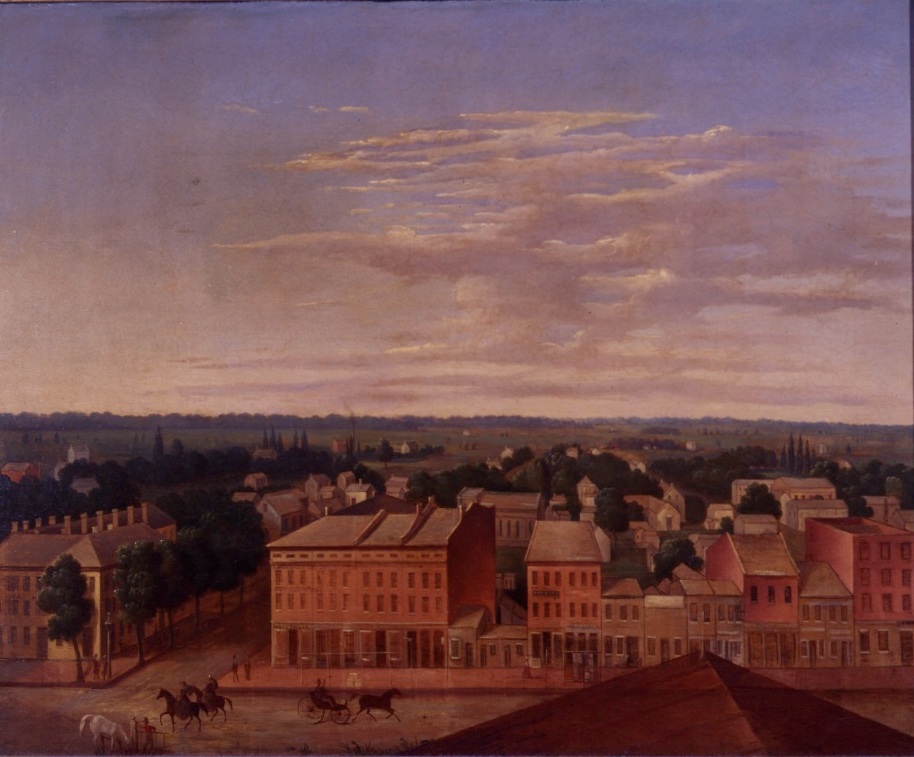 South side of square; the Tinsley Buildings, now the Lincoln-Herndon Law Offices State Historic Site, are at left (southeast) corner of Sixth and Adams streets. 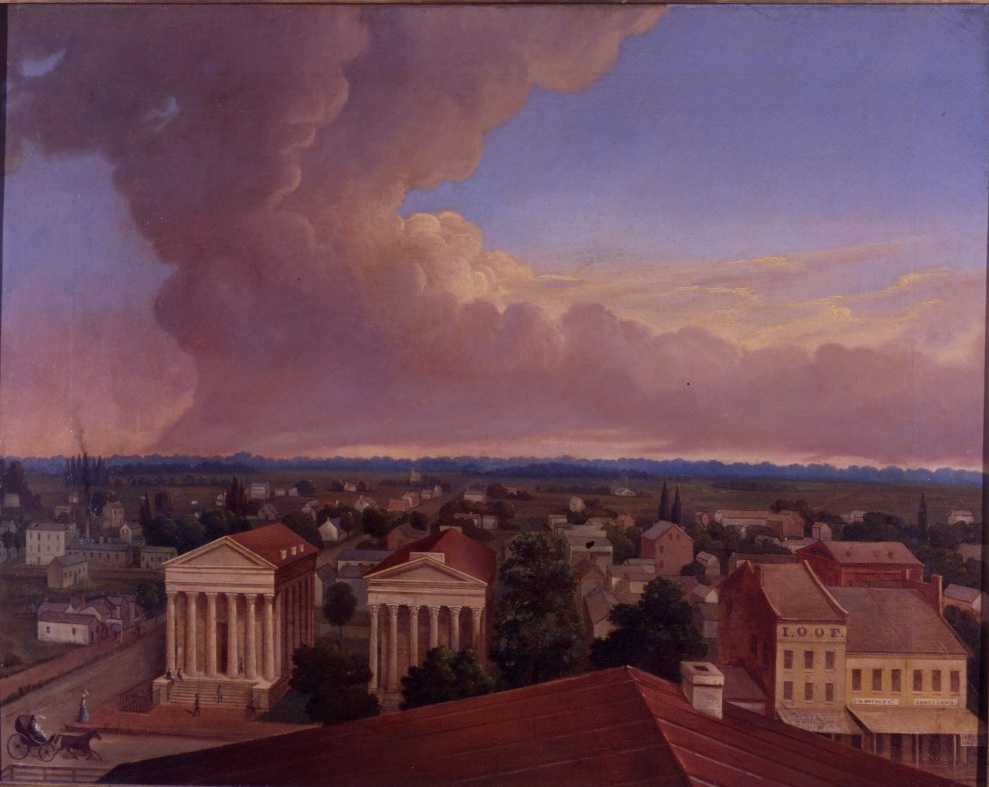 East side of the square; the two columned buildings are, left, the Sangamon County Courthouse and, right, Marine Fire and Casualty Co. (later Springfield Marine Bank). The cloud rising into the sky is said to be smoke from a prairie fire. Note plank fence at bottom left. 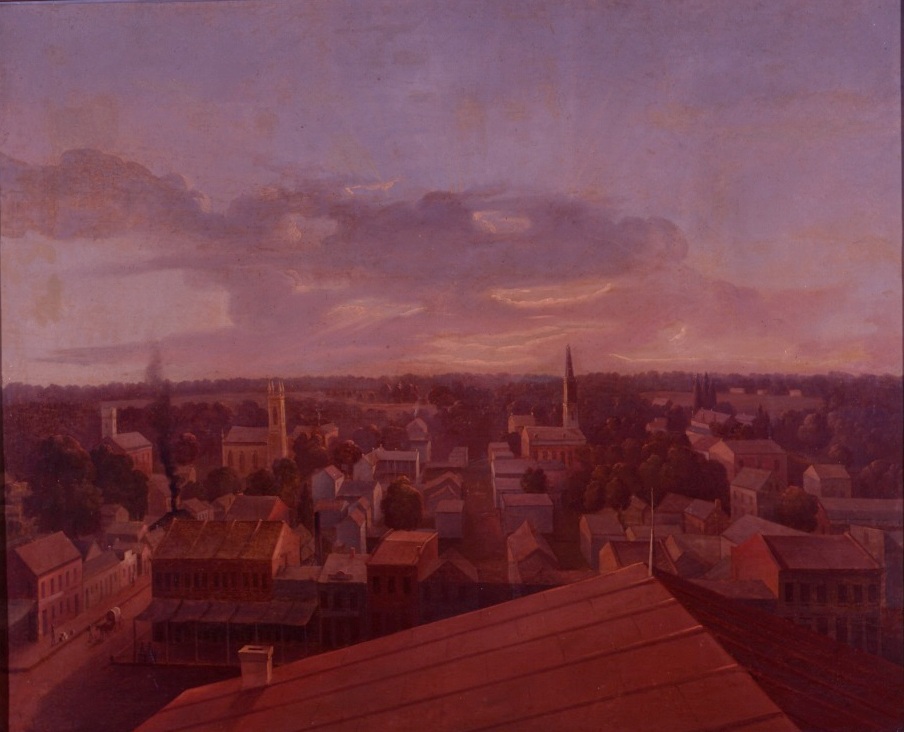 The four paintings now hang on the second floor of the Old Capitol. Metal tags on each state they show the Springfield square in 1857; that’s merely the first “fact” in dispute about the paintings, and it’s easily disproved by the east-side view. The plank fence shown in the bottom left corner was replaced by an iron one in 1854.

The question of who painted the four views is more complicated.

Old State Capitol interpreters for years have been told the paintings were by one Karl Weimar “or his brother-in-law.” That reference actually is to two German-born half-brothers, Carl Wimar (1828-62) and August Becker (1840-1903), who grew up and did much of their work in St. Louis.

Wimar, in particular, is known for his depictions of American Indian life in the 1850s. Late in his life, he collaborated with Becker to create four murals that decorate the rotunda of the Old St. Louis County Courthouse, now part of the  Jefferson National Expansion Memorial.

Except for their geographical proximity, however, little in the work of either Wimar or Becker suggests that they were involved with the four Springfield paintings.

The major source for attributing the Old Capitol paintings to Wimar and/or Becker apparently is an Aug. 15, 1909, Illinois State Register article that named Wimar as the painter. However, the Register’s identification depends heavily on what it calls “a history of his work in a local paper in recent years.” The Register story includes a substantial excerpt from the earlier paper; unfortunately, however, the 1909 article doesn’t otherwise identify the previous publication.

In any case, both the earlier story and that told by the Register writer are highly imaginative. The Register account includes an excerpt from the purported earlier publication:

(A) long time ago, when Springfield hugged close to the court house square, as though fearful of reaching beyond, there came an artist to the town, a German called Weimar  and as all stories of artists go (to make it interesting when he acquires fame) he was stranded here with a young wife and child. Whatever could have led him here is a mystery … but here he was and he must make money. … And so in the almost wilderness he struggled on, while over in Dusseldorf his artist friends spoke of him as they contentedly smoked in Bohemia, and his old teacher, the famous Nikutowski, would shake his head and say: “I wonder what has become of our friend Weimar; he went to America to make his fortune and now he writes us no more.”

The Register writer went on to add more detail of his or her own, again without making the sources clear. At the same time, the writer’s judgement of the artwork itself is perceptive.

With easel and paint box aloft, in the tower of the old state house, (Wimar) reproduced Springfield as it was then, taking each side of the square in turn, and these pictures are exquisitely painted. The reproduction is as true as a photograph — every distinct little building having its own prescribed place. The coloring is as clear, the drawing excellent and the perspective something to marvel at, only it required an artist to produce it. …

The reference to “as true as a photograph” is intriguing. Wimar and Becker both did take photographs in the process of creating some of their paintings, and the fact that all four Springfield views include outcrops of the Statehouse roof makes it at least plausible that, whoever the painter was, he might have used photos as the basis for the paintings.

However, both chronology — Wimar spent the years 1852 to 1856 studying in Germany — and painting style have led experts to dismiss the Wimar/Becker theory of the paintings’ origin.

A better candidate might be a French artist named Mathuren Andrieu (??-1896). Abraham Lincoln Presidential Library historian Mark Johnson outlined the evidence in favor of Andrieu in a 2003 memo.

Johnson wrote that Marianna Munyer, the state’s former curator of collections, determined “years ago” that the paintings were not Wimar’s work, and he went on to say:

It is possible that the paintings were done by one Mathuren Andrieu, a St. Louis artist who took his panoramic works on the road for exhibition. His “Crystal Palace” showed at Chatterton’s in July 1853, and in February his “moving mirror of the ‘Great West.'” The tantalizing bit is an Illinois State Register article: “Springfield Not Completed. Mons. Andriew, not yet having finished his sketchings of Springfield, will remain in our city this day and to-morrow.’ … Does this refer to what eventually became the four paintings from the OSC? They resemble his Chicago panorama, which consisted of four views made from the observatory of the Tremont House. …

The dating and other information makes it seem possible that these paintings are by M. Andrieu. As Maynard would put it, “Five minutes to say ‘We can’t know for sure.'”

Other sources also report that Andrieu’s panorama collection included one of Springfield.

Whoever painted the four views, they were recognized early on as valuable historic documents. However, their route to the Old Capitol was circuitous.

The paintings’ first known local owner was Springfield businessman Benjamin Watson (1818-1901). He later moved to Pike County to operate a resort at Perry Springs, taking the paintings with him.

(Watson’s resort was popular with Springfieldians seeking water cures, or just vacations, for several decades. According to Stu Fliege’s 2002 collection, Tales & Trails of Illinois, Watson, a candymaker in Springfield, spent an estimated $100,000 to build the resort, which could accommodate up to 300 guests. An 1866 newspaper report called Perry Springs “the Saratoga of the West.”)

In 1872, Col. John Williams urged the Sangamon County Old Settlers Association to start a pledge drive to buy the paintings fropm Watson. Nothing apparently came of that effort, but the Illinois State Register in reported in March 1881 that the paintings “were recently brought to this city and presented to Mr. John McCreery.”

McCreery exhibited the paintings in his St. Nicholas Hotel, which is where they were on display when the Register published its Weimar/Wimar review in 1909. Illinois State Journal columnist A.L. Bowen wrote that the four “well known” works were still on the St. Nick’s walls in 1928.

Some time later, the four views of downtown Springfield were donated to the state of Illinois. Sunderine Temple, who with her husband Wayne, deputy state archivist, wrote Illinois’ Fifth Capitol: The House That Lincoln Built and Caused to Be Rebuilt, says she was told the paintings had been hung in the current Statehouse, but were finally returned to their place of origin after the Old Capitol was restored in the 1960s. (Temple adds that the late James Hickey, a former state historian, told her they were the work of “a vagabond who came through Springfield,” which seems fair enough.)

The Illinois State Journal accurately summed up the paintings’ importance in an editorial published on Aug. 31, 1872.

“Their value as works of art may not be great,” the newspaper wrote, ” but they have a historic value, which increases every year. Nothing could so surely convey to strangers the wonderful prosperity and growth of Springfield as the sight of these paintings.”