Destruction of the Lincoln Tomb sarcophagus 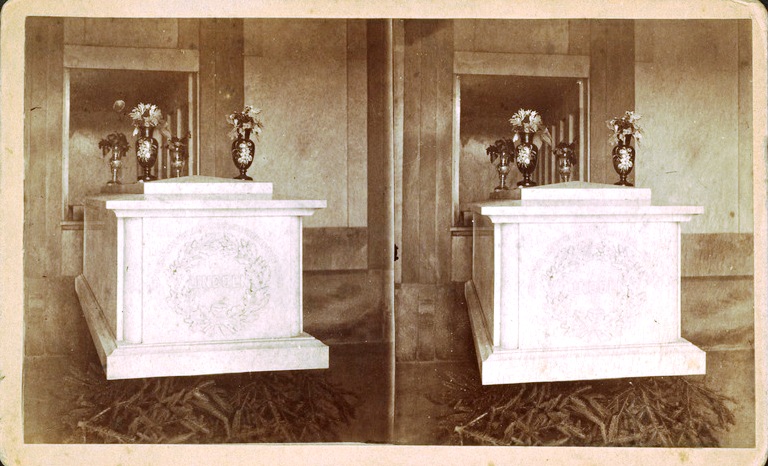 How did the marble sarcophagus that covered the coffin of Abraham Lincoln in the early years of the Lincoln Tomb State Historic Site come to be broken?  Was it a workmen’s accident? Or was it done on purpose by souvenir hunters?

The Illinois State Journal editorial page of Sept. 20, 1930, had a different answer: “It looks like a case of clear negligence.”

The sarcophagus fulfilled its original role — covering the president’s coffin — only briefly, from shortly before the tomb’s dedication in 1874 until the unsuccessful attempt to steal Lincoln’s body in 1876. Although the sarcophagus remained in the burial chamber thereafter, the coffin was almost never in it, being hidden elsewhere or, after 1901, buried beneath the chamber.

The sarcophagus was still in one piece when workers began the second reconstruction of the tomb in May 1930. While the monument was being dismantled, the sarcophagus was moved to the lawn outside. At some point, however, the marble was broken into uncounted pieces. Not only was it never determined who did the destruction or why, it’s not even known exactly when it took place.

The damage was revealed by an Illinois State Journal reporter who visited the site on Sept. 15, 1930. “The white marble sarcophagus, in which from 1874 to 1876 reposed the body of Abraham Lincoln, has been wrecked and portions of it have been broken and carried away by souvenir hunters,” the Journal reported on Sept. 16.

The sarcophagus had been intact on July 5, when a newspaper photographer took pictures of the work. “Yesterday, there were on the site only the marble lid, and some of the portions, it was declared, had been broken up and carried off by persons seeking souvenirs,” the Sept. 16 story said.

State supervising architect C. Herrick Hammond was quoted in the Sept. 19 Journal as saying he believed the destruction was the work of “vandals or souvenir hunters.”

“Mr. Hammond also expressed the opinion that the destruction … must have been accomplished at night or those who did it would have been observed by the workmen or visitors at the tomb.”

The next day’s editorial page, however, pointed fingers elsewhere:

The net results of the investigation into the destruction of the marble sarcophagus that for two years enclosed the body of Abraham Lincoln seem to be that no official orders went forth to smash the historic relic. It would seem that no orders at all were issued concerning the preservation of the marble box.

Removed from the crypt, it was left on the lawn. It looks like a case of sheer negligence. … Now that the sarcophagus has been broken up and some of the pieces carried away, officials hasten to guard and preserve the fragments.

Of course no orders were given to smash the sarcophagus. But were orders given looking to the preservation of the relic? Somebody slipped up, and the state of Illinois, privileged to treasure and guard the Lincoln heritage, bears the onus of blame.

The Journal did report one redeeming incident later. A minister from Virginia had picked up a piece of the broken marble, which he  “innocently enough assumed … had been thrown away,” as a memento.  “When he learned that the sarcophagus had been destroyed inadvertently (sic), he returned the piece,” the newspaper said.

One of the few remaining carved pieces of the sarcophagus went on display in the tomb rotunda in early 2013.

2 Responses to Destruction of the Lincoln Tomb sarcophagus