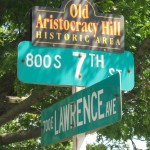 Springfield’s Aristocracy Hill neighborhood, which takes in an area just south of downtown, is one of five areas of Springfield that have been exhaustively studied by Fever River Research of Springfield. The resulting reports  are extraordinarily informative historical and archaeological analyses .

The report focuses on the various styles of residential architecture demonstrated in the Aristocracy Hill area, but also includes disquisitions on such topics as notable local architects, the development of apartment living in Springfield, railroad development through the area and a variety of historical nuggets, such as the background of the Jack Robinson System chain of hamburger restaurants.

The Aristocracy Hill report formerly was available online; however, Fever River’s website was hacked in 2014, and this report is among several that, as of March 2015, had not yet been restored.)

Note: Despite the value of Fever River’s surveys, there are unfortunate typographical and factual errors in some of them. Notably, in this report, Fever River reports that the Town House condominium building originally cost $57 million to construct. The Town House, which was largely completed in 1957, actually cost $2.5 million to build.