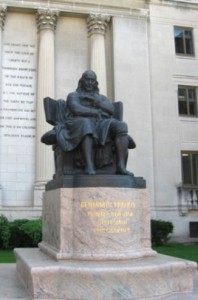 The Benjamin Franklin statue that sits in front of the former headquarters of the Franklin Life Insurance Company was unveiled on Sept. 8, 1949. Featured speaker for the ceremony was Vice President Alben Barkley.

Ann Otway Byrd Castle, the great-great-great-great-great-granddaughter of Benjamin Franklin, helped Franklin president Charles Becker pull a silken cord that dropped the shroud.  (According to The Fabulous Franklin Story: The History of the Franklin Life Insurance Company 1884-1970, Becker could be heard to mutter, “I hope this thing works.”) 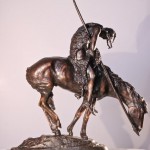 ‘The End of the Trail’

The sculptor was James Earle Fraser (1878-1953) of Connecticut, who had been a student of Augustus St. Gaudens. Fraser designed the 1913 Buffalo Head Nickel, and his other statues include “The End of the Trail,” done for the 1915 San Francisco Exposition and now in the National Cowboy & Western Heritage Museum in Oklahoma City.

The quotation behind Franklin comes from a 1789 letter to David Hartley.  It reads:

God grant that not only the love of liberty but a thorough knowledge of the rights of man may pervade all the nations of the earth, so that a philosopher may set his foot anywhere on its surface and say: “This is my country.”

This entry was posted in Arts and letters. Bookmark the permalink.