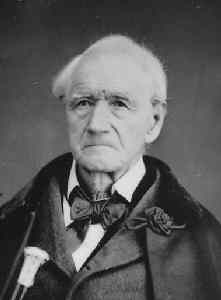 Charles Boyd (1794-1881) was a tailor who lived in Springfield from 1820 to 1830. A family history credits him with building the third cabin, first brick chimney and first dry well in Springfield, as well as making the first tax payment (75 cents) in Sangamon County.

In addition to his tailor shop, Boyd sold general merchandise from his home on the south side of Jefferson Street east of Fourth Street (No. 24 on the reconstructed map of 1828 Springfield).

Boyd’s partner in the shop was William Hamilton, son of Revolutionary War statesman Alexander Hamilton, according to the family history. William Hamilton boarded with Charles and Elizabeth Boyd and reportedly named one of the couple’s daughters Angelica Hamilton Boyd, after his sister.

Boyd was connected by marriage to John Dixon and Oliver Kellogg, both of whom later played roles in northwestern Illinois history. The Boyds, Dixons and Kelloggs, as well as Hamilton, were all briefly part of the community of Fancy Grove, which was west of Williamsville.

More information: The FamilyTreeMaker history, compiled by Linda Duncan, a descendant of Charles and Elizabeth Dixon Boyd, is well-footnoted, although there are no specific citations regarding the Boyd family’s experiences in Sangamon County.

This entry was posted in Early residents, Prominent figures and tagged 1828 map. Bookmark the permalink.