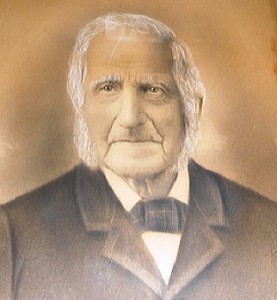 Jabez Capps (1796-1896), one of several energetic siblings who made their marks in both the U.S. and England, was a prominent merchant between 1819, when he arrived in Sangamon County, until 1836, when he moved away and helped found the community of Mount Pulaski.

The operator of a shoemaker shop in Springfield in 1828, according to John Todd Stuart (the shop is No. 15 on the reconstructed 1828 Springfield map), Capps eventually had extensive real estate interests in and near the city – among them the site of the Statehouse and of Oak Ridge Cemetery. (Capps reportedly traded the eventual Statehouse property for a cook stove and a lot on the downtown square for a side-saddle.)

Capps and his brother Ebenezer opened a secondhand store in Springfield shortly after arriving in Sangamon County. Jabez Capps also taught in the first school in Springfield, according to his biography on findagrave.com. One of his pupils, Prudie Ann Stafford, became his first wife. After her death in 1836, he married Elizabeth Baker, who died in 1887.

Abraham Lincoln, whom Capps had known since Lincoln’s days in New Salem, handled the legal work for the organization of Mount Pulaski.

“Lincoln always stopped with Mr. Capps when he visited the town,” the findagrave biography says, “and one of the deceased most valued treasures was a daguerreo-type of the martyred president which was given him by Lincoln himself.”