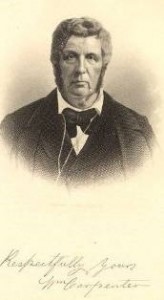 Carpenter Park and Carpenter Street are among legacies of the family of William (1787-1859) and Margaret Carpenter (1803-83), who moved to Sangamon County from Virginia in 1820.

The family first built a cabin north of the Sangamon River and eventually added a ferry operation. The Carpenter settlement became known as the “six-mile house,” which was an important point on the stagecoach line from Springfield to Peoria.

The Carpenters later moved to Springfield. William Carpenter operated a grocery on the southwest corner of Second and Jefferson streets in 1828, according to John Todd Stuart; the family lived in the same building, which is No. 8 on the reconstructed map of Springfield in 1828.

William Carpenter became the county’s second justice of the peace, was elected to the legislature in 1834 and served several terms on the city council. He was Springfield postmaster from 1837 to 1840. Carpenter also had extensive real estate holdings.

Carpenter and his son-in-law, Adolphus Wood, built a saw and grist mill – Rock Dam Mill, better known as Carpenter’s Mill – on the Sangamon River near Peoria Road in 1844-45.

The Carpenter family’s property along the river was sold to the Springfield Park District by their daughter, Sarah, in 1922. Carpenter Park, 434 acres of high-quality forest, was dedicated in 1979.

The Illinois Nature Preserves Commission says the park provides a rare glimpse at the forest that originally existed along the Sangamon River:

In spite of heavy use, the preserve still maintains a high quality wet-mesic floodplain forest, dominated by old growth sycamore, silver maple, cottonwood, and boxelder trees. The dry-mesic upland forest community is dominated by black and white oaks with scattered black cherry and hickory. The steep slopes and ravines support red and white oak. The canopy trees are nearly one hundred years old, but past disturbances have eliminated the younger age classes. This large tract along the river is important habitat for many wildlife species such as deer, raccoon, white-footed mouse, and short-tailed shrew.