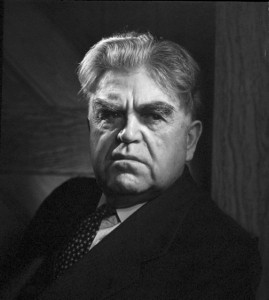 For 40 years the head of the biggest coal miners union in the U.S. in an era when the country depended almost entirely on coal for its energy needs, John Llewellyn Lewis (1880-1969) was a household name from the 1920s through the 1950s.

Remembered for his role as a leader of national strikes, he also led the campaign for the first Federal Mine Safety Act in 1952. In the 1930s, Lewis undertook to organize all industrial workers in the Congress of Industrial Organizations (CIO), of which Lewis was the first president. Hailed by many as a labor statesman –and just as often damned by his own union members as a turncoat—Lewis worked with nine U.S. presidents during his tenure. Lewis was awarded the Presidential Medal of Freedom by President Lyndon Johnson.

Like many of his countrymen, the young Lewis, the son of Welsh immigrants, worked as a coal miner. Born in Iowa in 1880, Lewis in 1908 moved to Panama, Illinois. There, at the site of Panama Mine No. 1, the largest in Montgomery County, he began his career in the labor movement. He joined the United Mine Workers of America, in which organization he climbed, or rather fought, his way up the ladder – from branch secretary, lobbyist, and statistician.

Lewis listed his residence as Springfield from 1910 until 1937, although for most of that period he actually spent relatively little time in the city.

He moved with his wife and children to Springfield in 1910 to be near the state headquarters of the UMWA at Fourth and Monroe streets. Among Lewis’s posts with the UMWA was legislative aide; he helped win approval in the General Assembly for a pioneer state workman’s compensation law.

In addition to his home at 1132 W. Lawrence Ave. (which is on the National Register of Historic Places), Lewis bought two other houses in the same neighborhood for his parents and sisters. (His younger brothers also bought homes nearby.) The children attended the Springfield public schools.

Beginning in 1919, Lewis administered the daily affairs of the UMWA from its national headquarters in Indianapolis. He became national vice-president and then acting president, until, in 1920, he was elected president of the UMWA.

Biographers Melvyn Dubosky and Warren Van Tine ask, “Why did Lewis reside in Springfield, when he administered the UMW from Indianapolis?” The most plausible of several possible answers is that the decision reflected Lewis’s need to keep his work and his family life separate.

Lewis’s national career and his increasing affluence meant that both he and his family often traveled outside Springfield. He was nonetheless an instantly recognizable figure on the streets of Springfield.

“He would wear a cloak and swing it around,” recalled one resident. “He would have liked to be an actor, I think.”

Barber Bernie Koch Sr. opened a shop in 1934 in the Mine Workers Building. According to Koch family lore, the barber once asked Lewis whether he wanted his famously bushy eyebrows trimmed. Lewis declined, explaining that people found them intimidating, and that “in his business, that’s good.”

One of Lewis’s traits that impressed the general public was his skill with words. During World War II, when the CIO under Lewis was fighting the steel industry, an angry President Franklin Roosevelt wished a plague on the houses of both antagonists. Lewis replied, “It ill-behooves one who has supped at labor’s table and who has been sheltered in labor’s house to curse with equal fervor and fine impartiality both labor and its adversaries when they become locked in deadly embrace.” 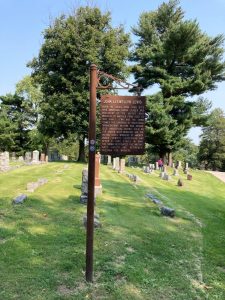 The Lewises left Springfield in 1937 for Alexandria, Va., but he continued to visit Springfield to tend to his mother until her death in 1965. Her pleasure at a program of Welsh hymns at a St. David’s Day service at the First Presbyterian Church in downtown Springfield led Lewis to write minister Dr. Richard Paul Graebel in thanks. The two became friends and met occasionally for lunches of sauerkraut and spareribs.

Lewis resigned as UMWA president in 1960, but remained active as chairman of the trustees of the union welfare and retirement fund.

Lewis died June 11, 1969 at age 89. He was buried a week later in a private ceremony  — State Journal-Register columnist Toby McDaniel called the event “hush-hush” — in a family plot at Oak Ridge Cemetery.

Correction: This entry has been edited to correct the date of Lewis’s death.