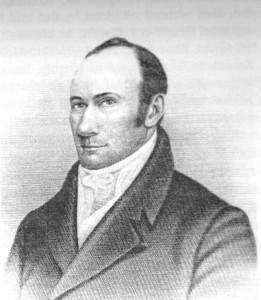 Pascal Paoli Enos (1770-1832) was one of the four original owners of the land that eventually became the city of Springfield, and, as receiver in the Springfield land office, he played an influential role in the growth of the area.

Enos, who had served earlier in the Vermont legislature, moved to Sangamon County from near Edwardsville after his land office appointment in 1823. He established his new office in a two-story log building near the northwest corner of Second and Jefferson streets (No. 18 on the reconstructed map of 1828 Springfield). His family also lived in the building.

Shortly after his arrival, Enos joined with Elijah Iles, Thomas Cox and Col. John Taylor to buy land centered around the Kelly family’s old settlement at First and Jefferson streets in Springfield. Each of the four purchased a quarter section, although Enos and Iles received most of the land where cabins already stood. The group paid the statutory price of $1.25 per acre for the property and then began selling lots.

When they laid out the town, the four owners called it “Calhoun,” after U.S. Sen. John Calhoun of South Carolina, but people already had known the area as “Springfield,” and the new name never caught on.

Enos, a Whig, lost his land office receivership after Andrew Jackson became president in 1829. He died in 1832.

Enos’ wife, Salome Paddock Enos, took over management of her husband’s extensive land holdings following his death. She made several significant donations of land to both the county and city, including the downtown square that now is the site of the Old State Capitol.

Pascal and Salome Enos’ sons, Pascal Jr. and Zimri, also were active members of the Springfield community. Pascal Jr. served one term in the legislature, and Zimri, a surveyor and three-term Springfield alderman, left recollections that are a valuable source of firsthand information about early Sangamon County.