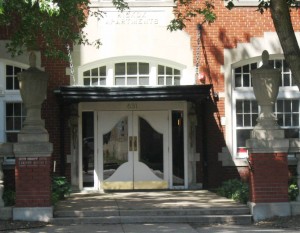 The Hickox Apartments, built at Fourth and Cook streets beginning in the mid-1920s, are a five-building, 100-unit complex that “brought social respectability to apartment living” in Springfield, according to Fever River Research’s 2003 study of the Aristocracy Hill neighborhood.

Builder Harris “Buzz” Hickox (1889-1972) began with a row of three-story buildings that appear to have been opened to tenants in June 1926. Those were followed by a five-story courtyard building in about 1930.

“The combination of Hickox’s social status, the location near the Executive Mansion, modern design, and sound maintenance allowed the complex to endure,” Fever River concluded.

The Hickox Apartments were added to the National Register of Historic Places in 1984.

Life at the Hickox: James Krohe Jr., the resident of a Hickox apartment in the 1970s, described life there in a 1978 article for Illinois Times.

This entry was posted in Buildings, Fever River and tagged Apartments, Executive Mansion. Bookmark the permalink.